Writing Morality in the Anglo-Norman World

Davide Battagliola, post-doctoral researcher from the University of Milan visited the Anglo-Norman Dictionary project for 4 weeks in July-August 2018 – thanks to a bursary from the AND and the AHRC (Arts and Humanities Research Council). During this period, he was able to continue his research in Aberyswyth, making use of the materials, resources and expertise of the AND team.

He writes the following blogpost on his project.

We can find a high number of continental manuscripts transmitting the Livre de Moralitez. This French translation of William of Conches’ Moralium Dogma Philosophorum achieved a remarkable success throughout Europe during the Middle Ages; yet, little did we know about the circulation of this moral treatise in medieval Britain. 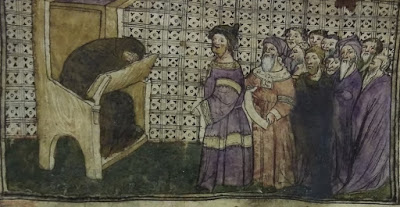 The treatise opens with the author falling asleep and being visited in his dream by ancient philosophers and writers (miniature taken from the ms. Torino, Biblioteca Nazionale Universitaria, L.III.14)

In his 1929 edition, John Holmberg already pointed out how the manuscript K (Paris, BnF, fr 25407), the only Anglo-Norman witness, offered a remarkably different text than the version widely read on the Continent. Whats’s more, K appeared to provide a more reliable version of the work. One may ask why Holmberg did not use this manuscript to establish his edition, but we all know that back in the 1920s the Anglo-Norman language was still considered nothing more than the faux français d’Angleterre…

The Swedish scholar also supposed the existence of a common source for the manuscript K and Paris, BnF, 1822 (= L), which transmits an abridged form of the treatise. Traditionally thought to be produced in Wallonie, L was copied by Servais Copale. In his latest monograph, Keith Busby affirms that the scribe operated in Ireland, a statement which would in fact need further study. But, regardless of its geographical provenance, the manuscript L undoubtedly exhibits an interesting mixture of both Anglo-Norman and Walloon traits. Moreover, Holmberg was not aware of the existence of another insular witness, that is Cambridge, Corpus Christi College Library, 405 (Cc).

During my staying at Aberystwyth – funded by a bursary from the Anglo-Norman Dictionary together with the AHRC – I had the opportunity to study these three manuscripts from a textual and linguistic point a view. It has been of particular interest to focus on the lexical peculiarities of this version. Take for example the following sentence about the virtue (!) of cruelty:

(The third kind of cruelty is to chase away thieves, murderers and all those who lead such kind of life, as they are not to be tolerated in the community)

An analysis of the context of K and Cc also allowed me to explain the occasional presence of sentences drawn from the Bible, one of the most striking feature of the Anglo-Norman redaction. In a treatise mostly composed of quotes by great men of the Antiquity, such as Seneca and Cicero, these biblical insertions can be attributed to the influence of monastic Orders: indeed, the codex Cc belonged to the Hospitaller brethren of Saint John of Jerasulem in Waterford; as for L, the scribe Servais Copale worked in harness with the Hiberno-Norman Dominican author Jofroi de Waterford. 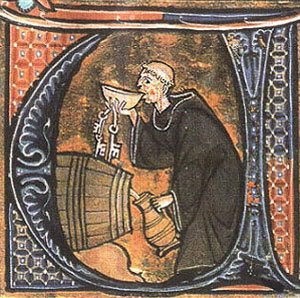 Once again a comparison with the continental version is of great interest. In Holmberg’s edition we read:

(The parts of felony are fear, greed and covetousness. Fear is when a man wants to harm another one and he is afraid of having a damage if he does not do that)

The insular witnesses replace paors with peresce (‘lazyness’). No wonder that, within the cold walls of a cloister, a monk could indulge from time to time in the sweet temptation of staying in bed until late! Of course the Anglo-Norman Livre de Moralitez gives a nicer ring to it:

Were these insertion a mean to counterpoint the mundane, maybe too secular, nature of William of Conches’ compendium? It is just one of the many questions arising from this fascinating Anglo-Norman adaptation of the Livre de Moralitez.