Words of the month: ‘pedigree’, ‘pé de colum’ and ‘péage’

As was the case for the last two years, 2015 will see this blog continuing to highlight rare, interesting or curious words of the Anglo-Norman language, gathered in the process of revising the Anglo-Norman Dictionary. And we thought we’d start off the year with not one but three different words ‘of the month’ for January. Can they be any more different? Firstly, the English word pedigree is, broadly speaking, a synonym for genealogy or line of descent, often presented visually as a tree-structure or chart; secondly, the Anglo-Norman phrase pé de colum translates as ‘foot/claw of a dove’; and thirdly péage is a Modern French word used for the toll that’s payable on motorways in French speaking countries.

With the AND editors currently working on words beginning with the letter P (with Q, in un-alphabetical order published earlier this month!), it turns out that these words are related on an etymological level, and that, with a few surprises thrown in as well, they all derive from the same etymon. 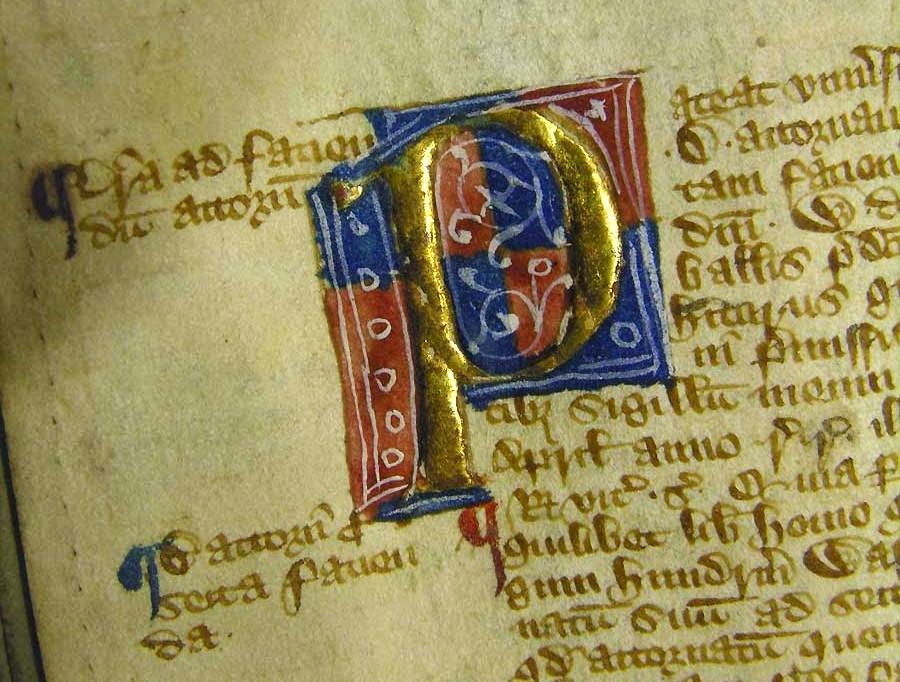 Let us begin with pedigree. This English word has had numerous different spellings through the centuries, each of these possibly reflecting different (pseudo-)etymological interpretations. In some late-medieval and sixteenth-century English sources, for example, it can be found spelled as pedegree, peedegree, pedugree, or even divided into two words pee degree – suggesting a link, perhaps, with word degree. Early etymologists struggled to explain pedigree as a conflation of par degrees, a French/Anglo-Norman phrase which could be translated as ‘by degrees (of relation)’ and thus refer to the ‘degrees’ or ‘steps’ in descent.[1] However seemingly plausible, this explanation is incorrect for two reasons: firstly, not only would it be very unlikely for the preposition par (cf. Latin per), especially when used as a prefix or conflated into another word, to lose its final ‘r’,[2] but also, the other attested spellings of the word are often too far removed from degree.

For example, also during the late medieval and early modern period, the word pedigree is often attested spelled quite differently as pettigree or petygrew, with the first two syllables suggesting an understanding of the first element of the word as an instance of French petit (‘small’) – rendered in English as petty.[3] As for the second half, gree is attested in Middle English (and later) as a synonym for degree, borrowed from Anglo-Norman gree1.[4] This interpretation is evident in two sixteenth-century attestations of the word, found in Holinshed’s Chronicles of England, Scotland and Ireland (New Edition 1577-87), where apparently an attempt was made to express this explicitly in the spelling:

‘To fetch their petit degrees from their ancestors’ (Description of Ireland, vol. 1, p.33)

There is, however, no explanation as to why the degrees or steps in line of decent in pedigrees should be considered to be ‘petty’ or ‘small’. 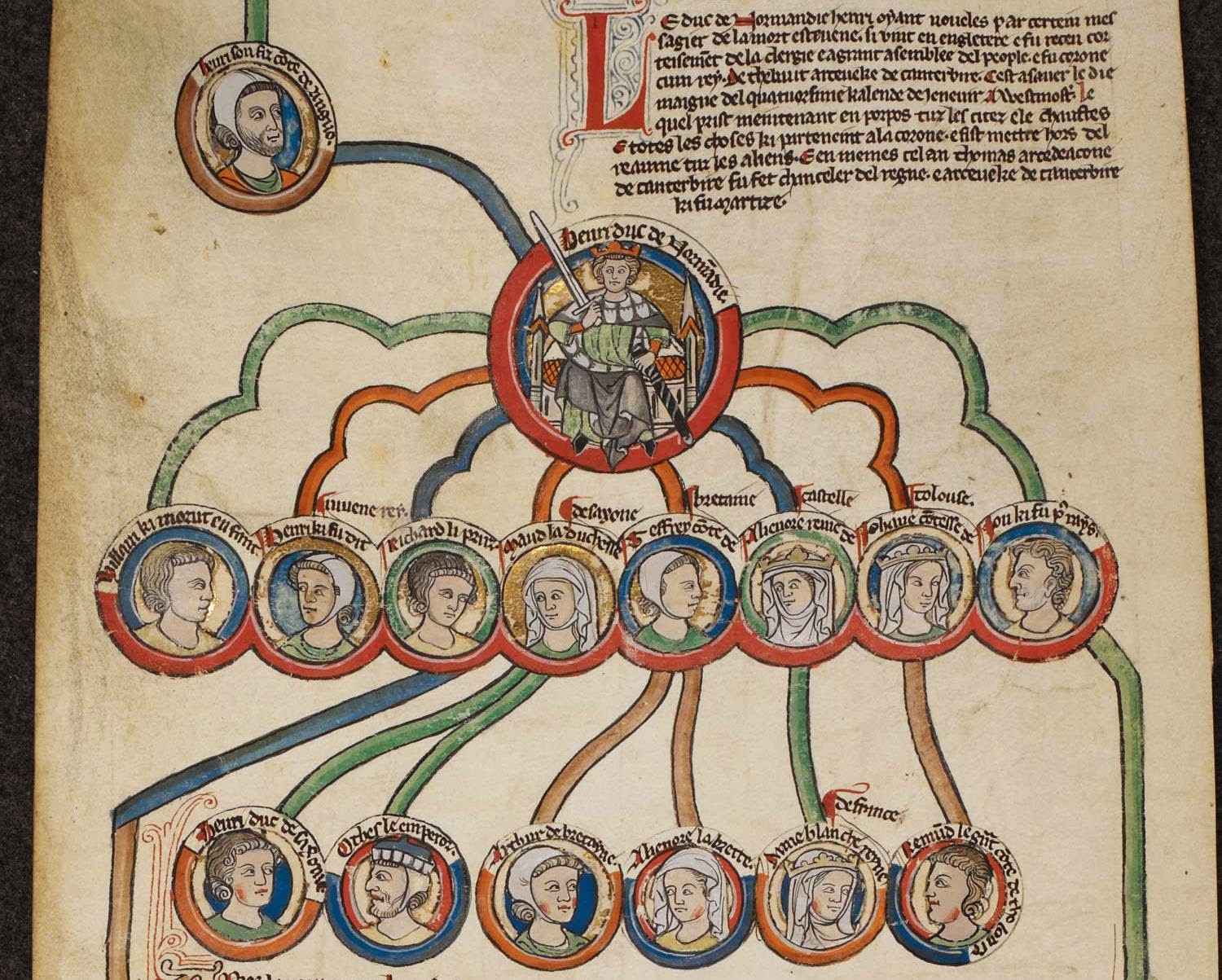 The initial attempts to discover the origins of the word pedigree seem to fall within the realm of folk etymology As the OED (third edition, 2005) confirms, the word first appears in English from the 1420s, with the earliest attestation found in Lydgate’s Troyyes Book (using a very intriguing spelling):

‘Who so liste loken and unfolde þe pe-de-Grew of cronycles olde […] He shal fynde þat he is justly born To regne in Fraunce by lyneal discent’ – Troyyes Book v.3388

More than a century earlier, in a court document of 1308, the word is already attested in Anglo-Norman:

(John E. and Lucy submit a writ against William and establish a claim, [which] they account for by means of the genealogical line, as follows [showing a brief family tree of the sisters Julia, Lucy and Alice and their children]).

It seems that Anglo-Norman and this early spelling as a locution, pee de gru, are the key to understanding the etymology: the phrase used here translates literally as ‘foot of a crane’ (cf. AND pé1 and grue1). W.W. Skeat, in his early nineteenth-century Etymological English Dictionary already deduced that ‘we may feel sure it is French’ and that ‘there may be a reference to F. grue a crane’ (p. 430). That interpretation has persisted, and has been reinforced, with some hesitation perhaps still apparent in their use of the adverb ‘probably’, by the OED’s etymological discussion of the word (third edition, 2005) and the MED’s entry pedegru(e n. 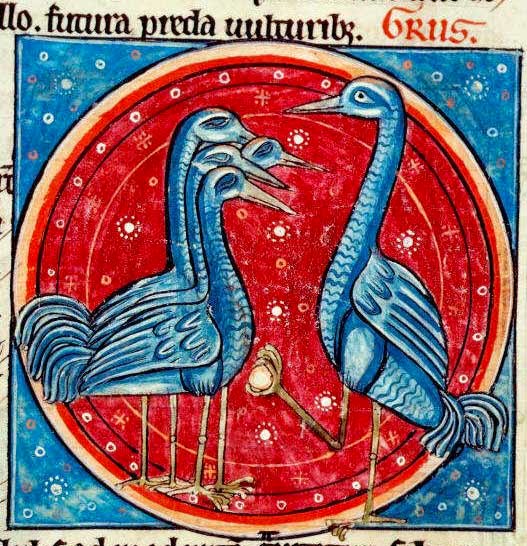 The suggestion is that this sense arose from the use of a conventional three-line mark in medieval manuscript genealogies to indicate succession and/or kinship. This symbol could be interpreted as the three toes of the bird, or, suggested elsewhere, its tracks. From this, the word for the symbol then came to refer, as a pars pro toto, to the entire genealogical representation.

Although this explanation seems to be generally accepted now, I have not seen any examples of the use of such a symbol in medieval genealogies. I would be very grateful to any medievalists or genealogists who could provide us with examples of these ‘crane’s feet’ in manuscript genealogies, and help us to corroborate this theory.

The same word or word group is not found in Latin[5], and is also absent from Continental French until the nineteenth-century, when pedigree is borrowed directly from English.[6] Therefore, it appears that pedigree is an insular formation, originating in Anglo-Norman and appearing a century later in English. It seems it quickly lost its original association with the claw-like symbol, only to be subjected to various forms of (mis-)understanding of its original significance and re-interpretation of its spelling. 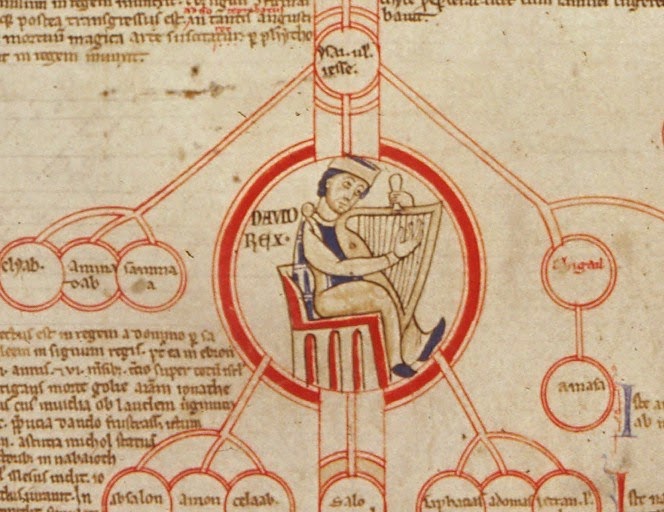 Further editorial work on the (large) AND article for pé1 (‘foot’) is bringing together other Anglo-Norman word groups that, similarly, refer to feet of birds: pé de cok (cf. cok1), pé de colum (cf. colum), pé de corf (cf. corf1) and pé de corbel (cf. corbel1). Ironically, just as for pé de grue, none of these seem to be attested designating the actual feet of cockerels, pigeons, crows or ravens. To take pé de colum (‘dove’s foot’) as an example: 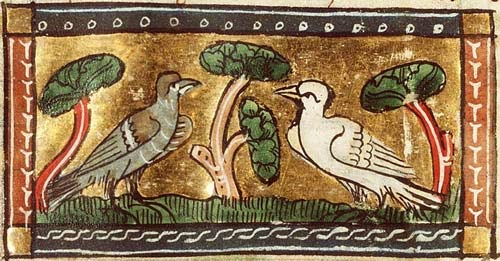 In this case, the ‘dove’s foot’ is the name of a plant, and the same phrase is still used in English to refer to the Geranium molle, also known as (rather confusingly in the present context) the ‘crane’s bill’. Medieval Latin produced pes columbinus (DMLBS 386a) with, apparently, the same sense. Medieval botanical names can be notoriously difficult to pin down precisely, and additional Anglo-Norman attestations (usually from medicinal recipes) gloss the same pé de colum with Latin herba fetida (‘stinking herb’) and English maewort (probably mat-wort, if not med(e-wort or mug-wort) and culverfot (culver). Ultimately, it is the name of a type of wild Geranium, which in the shape of either its leaves or its flowers must have been reminiscent to the medieval mind of the bird’s foot.

Similarly, all of the above Anglo-Norman birds’ feet are in fact plant names, sometimes also attested in English, but never, according to the DMF, in medieval Continental French. The present AND article for pé1 already confirms that animal feet seem to have been a prime source of inspiration for plant names, with other examples such as pé de cheval (‘coltsfoot’, cf. cheval), pé de leun (‘lion’s foot’, cf. leun2), pé de levere (‘hare’s foot’, cf. levere1), and pé de pulein (also ‘coltsfoot’, cf. pulein1). 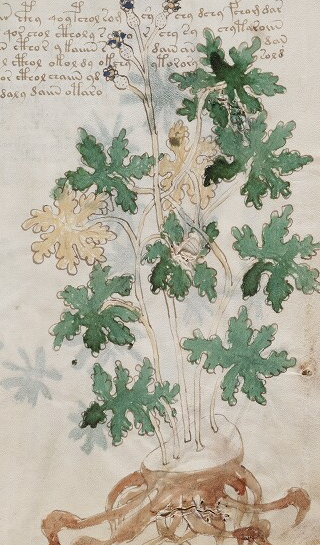 The third word, péage, now seems quite a departure from the above discussion on genealogy, birds’ feet and plant names. It is included here, because it is, after all, less out of place than one might expect. Firstly, the word is already well attested in medieval times, and appears in Middle English, Continental French and Anglo-Norman with the same sense of ‘road toll’ – a fee paid in exchange for the right to use a certain road or bridge:

(Henceforth, I exempt and relieve all English pilgrims, coming or going, under my jurisdiction, wherever that may be; and I wish them to be free of and exempt from any kind of ‘péage’)

Since péage is a type of payment extracted, the word may very easily have acquired an association with the verb paier in Anglo-Norman – ‘to pay’ in English. After all, Anglo-Norman spellings of that verb include paer, peer or peier. In the early stages of working on the P- revision, the editors almost made exactly that mistake, including the substantive in the group of words going back to the Latin etymon pacare. However, when confirming its etymology,[7] it soon became obvious that once again this word was related to pé1, ‘foot’. The post-classical Latin word for this toll is pedagium (DMLBS 2163b),[8] which is a clearly a derivative of pes (and its declined form ped–): ‘foot’. Late Medieval and Early Modern English also has spellings like podage or pedage that leave that link more apparent. In Anglo-Norman we also find petage, which is probably the same word:

(he had given him the aforementioned stewardship of Ax, together with the ‘péage’ and other revenues, profits and dues that belong to it) 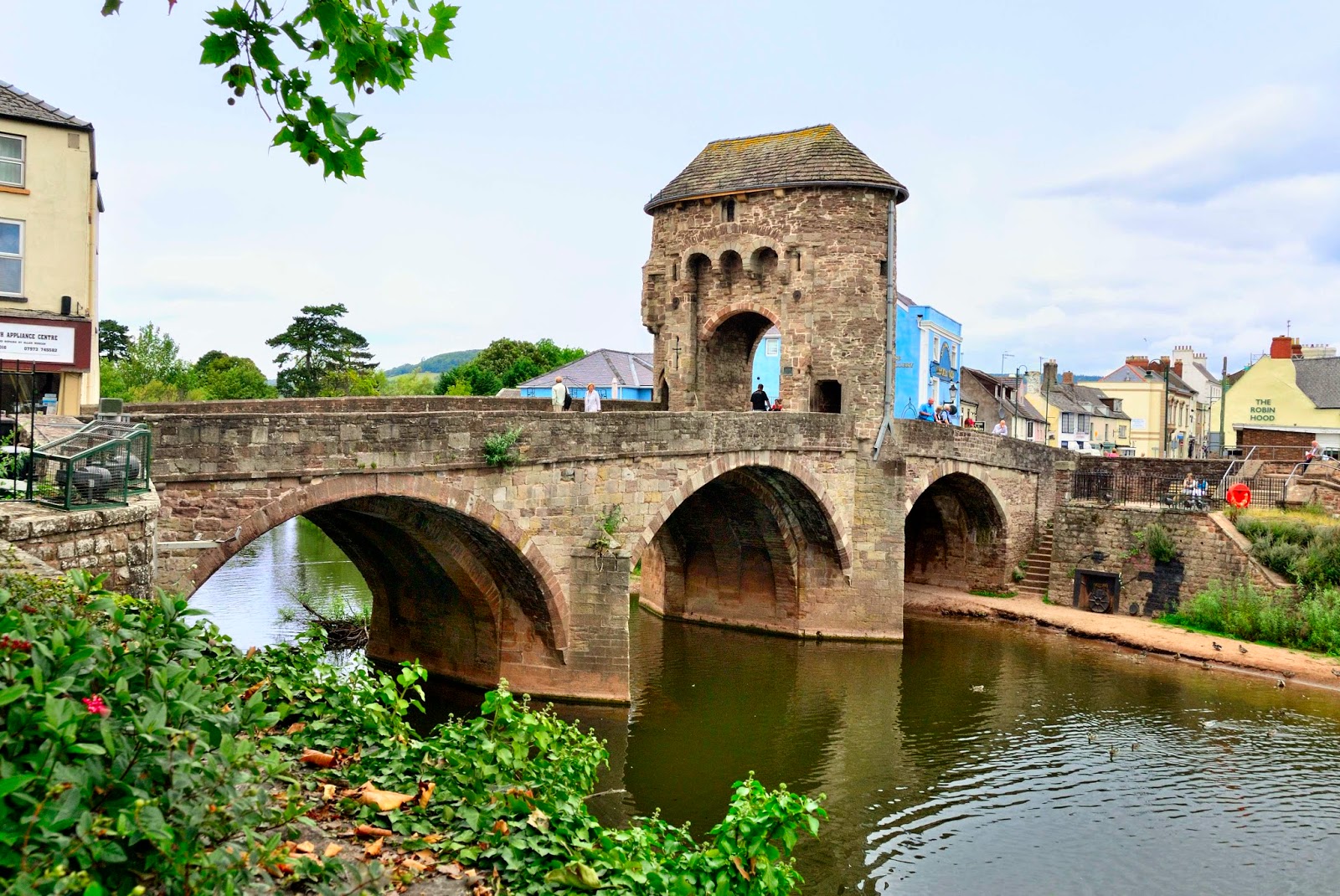 The thought-process behind this word, originally, must have been not so much that it was a ‘payment’, but that that the toll was paid for travelling ‘on foot’ or for ‘setting foot’ on certain roads or bridges. Then again, a word like paiage must have sounded like a perfectly acceptable synonym for paiement, and there are numerous examples in Anglo-Norman where it seems to have meant just that:

To conclude, just like pedigree also peage not only turns out to have a somewhat unexpected etymology leading back to the word for ‘foot’, but also has that origin eclipsed by later competing etymological interpretations – which, in turn, were influenced by or produced variant spellings. Part of revising the AND is to detect and disentangle these etymological families, and to classify these words in the correct categories. 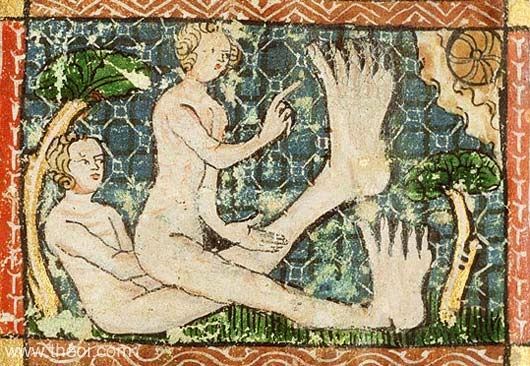 [1] See for example the brief note by S. O. Addy in Notes and Queries 9:5 (1900), p. 233, which refers to the mid-fifteenth-century Promptorium Parvulorum and its definition of the word as ‘a lineage in steps’.

[2] See for example the (obsolete) interjection perfay, borrowed in English from Anglo-Norman par fei, and meaning ‘by my faith’. The word (or sometimes phrase) is attested in English from the early-fourteenth until the mid-nineteenth century in a great variety of spellings, though always starting with par-, per-, pur- or even pro-.

[3] English still has expressions like petty cash or petty jury.

[5] The DMLBS lists pes originationis as a expression meaning ‘pedigree, lineage, descent’ (pes 2251b). However, this phrase is attested only once in a text from 1461 and is not relevant for the present discussion.

[8] The DMLBS also includes paagium (2073a) which has the same sense and appears to be a Latinized form of the vernacular word, and pedaticus (2164a).