The starting-point for this investigation is on the one hand the Anglo-Norman gigeler, attested only in one text, William of Waddington’s Manuel des péchez, a didactic and moralising treatise from the last quarter of the fourteenth century. The verb gigeler, “to frolic”, is generally treated in the dictionaries as a derivative of the relatively well-attested giguer, itself apparently based on gigue, “a stringed musical instrument, smaller than a viol”, ultimately from Old High German gîga (modern German Geige; cf. FEW gîga, 16,35b). There is some (literary) evidence that the instrument came to France from Germany. Giguer itself, perhaps surprisingly, does not appear to be attested in Anglo-Norman, but the musical instrument gigue and gigur (the player thereof) both are; both, too, are borrowed into medieval English (MED ğige n.2; ğigŏur n.). (OED’s gigue, the musical composition, is not attested until 1685 and as the pronunciation reveals, is a later French borrowing.) 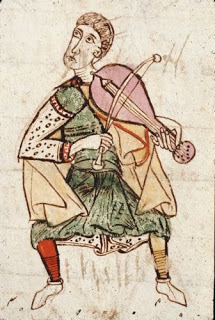 English giggle looks suspiciously as if it could or should be related. Alas, not so. It is described by the OED (giggle v.1) as “echoic”, and parallels are drawn with Germanic forms such as Dutch giggelen, and medieval then modern German gickeln, extensively described in the Grimms’ Deutsches Wörterbuch (DWB) under the entry gickeln. It seems unlikely that there is any link between Anglo-Norman gigeler, and English giggle: the latter is not attested until 1509 (a translation of Sebastian Brant’s 1494 Ship of Fools, or Narrenschiff) and the array of Germanic cognates points firmly towards a native word. OED’s giggle2, an obsolete verb meaning “to turn rapidly; make giddy” derives from gig n.1.

Then there is the matter of Englishjig v.. This may, the OED suggests (in an article largely unrevised since 1901), be related to Anglo-Norman and French giguer, but the case is far from clear. What is apparent is a phonetic similarity (perhaps the result of what the OED describes as “parallel onomatopoeic influence”), and some degree of semantic overlap, though not in the core senses of jig. Going somewhat against the linkage is chronology (the English word is not attested until 1598). The noun jig n.1 is found only a little earlier, in c1560: the same reservations are expressed in the OED etymology about its possible connections to gigue, with which jig, we are told, is “often assumed to be identical” (though by whom, is not made clear). Jiggle v. is later still and probably needs to be discounted without further ado. 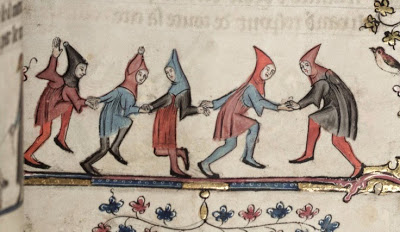 The Trésor de la langue française (TLF), under gigue3, gives the verb giguer (“vieilli et rare”), with the sense “courir, gambader, danser”, with one quotation from 1841. The hypothesis of a derivation from TLF’s gigue1 (the musical instrument) is rejected as “unconfirmable”. (This does raise the uncomfortable question of how often etymologies can ever be definitely “confirmed”.) The option of a connection with gigue2, “cuisse de certains animaux”, on which see below, is not discussed.

To return to gigeler. Gigler is a fairly rare variant form of giguer, with the sense “to play a gigue”, in continental French (FEW 16/i,35b; DEAF G725). The sense found in our Anglo-Norman example is, however, absent on the continent. Gdf 4,278b giguer is given with the same basic sense (“folâtrer”) and a present participle used as an adjective seems to mean “expressing joy, pleasure”. Godefroy helpfully provides a whole series of modern dialectal instances of the verb meaning “to jump, to spring around”; these are confirmed by the FEW (16/i,36b).

What about etymology? The FEW puts in one article the senses of “musical instrument” and “part of a leg”. The etymological explanation of gîga is that it goes back to a verb *gîgan, “to go back and forth” (“hin und her bewegen”), a reference to the movement of the bow across the strings and the core sense of English gig v.2 in the OED. Gigue in the anatomical sense arises because of the visual similarity between instrument and leg, and is a back-formation from Middle French gigot (still in use in modern French in menus, cooking, and butchery, cf. gigot d’agneau). Since giguer antedates gigue “thigh” (the first attestation of which is not until 1655, FEW 16/i,36a), the likely explanation is that it does indeed derive from the musical instrument sense, again based on the to-and-fro movement involved in playing it. Broadly, the DEAF article gigue [Baldinger] which also covers giger, gigler (G724), agrees with the FEW. Tobler-Lommatzsch (4,318) has two articles for the verb(s) giguer, one for playing the gigue, one for dancing and jumping around, which is a semantically reasonable way to represent the situation in Old French, but not an etymological one. 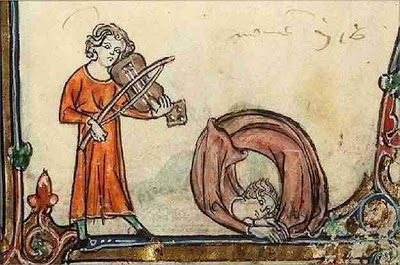 OED gig n.1, which the OED regards as “perhaps onomatopoeic”, and with a core sense of “something that whirls”, has a whole range of more or less figurative secondary senses including that of (II.4) “a flighty, giddy girl”, now obsolete but attested a1200 to 1780, and her male equivalent from 1777, “a queer-looking figure; an oddity”, described as “chiefly Eton College slang” and perhaps therefore lying somewhat outside our remit. But the MED (whose etymological note sub gigge n.1 suggests “? Cp. Fr. gigue a gawky young woman”) has the latter from a1387 (Trevisa’s translation of Higden’s Polychronicon), together with compounds with –laughter and –halter. Unfortunately, there is no trace of this sense claimed for French until far too late to be of relevance (cf. FEW 16/i,36a).

OED also has a probably entirely separate gig n.3., most likely to be again “echoic”, meaning “a squeaking noise”, and for which there is only one quotation, from Chaucer. Both the MED (ğīgen) and OED (geig v.) have the corresponding verb, which is phonetically a plausible cognate of gigue as its initial consonant is [dZ]. (MED wrongly refers to OED jig v., in any case not attested until 1598.) DWB’s gicken and the substantive gicks are probably the same word. The OED’s 1899 entry sidesteps the question of how the word is pronounced but the Middle English Dictionary (MED) has the word listed with the same sole quotation under ğigge n.2, i.e. [dZ-], with an erroneous cross-reference to OED guige (which is the equivalent entry to MED’s gīğe n.1, to which the OED correctly refers …), and a verb ğīgen, also with only one supporting attestation. 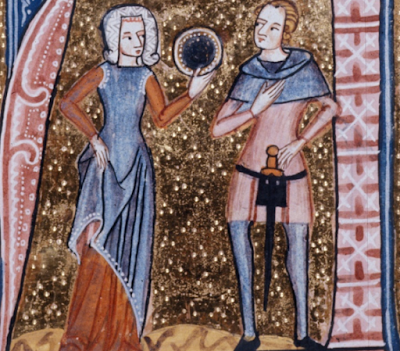 Where, finally, do gigolos come in? As the FEW laconically observes, “Um gigue gruppiert sich eine grossse zahl von meist depreziativen ablt.” (FEW 16/i,36a), and French gigolette (ibid.) from 1864 is one of these: the TLF under this word offers two senses which a non-expert might easily confuse: “fille des rues”, and “jeune fille délurée, de mœurs faciles, fréquentant les bals populaires”. Gigolo (though found a little earlier, in 1850), is treated by the TLF as a derivative (with the characteristic slang suffix -o(t)) of gigolette. In both entries the TLF alludes to the pejorative senses attaching to English giglet, giglot, attested in Middle English from a1325 in MED’s entry ğigelot n. and in the OED’s giglet | giglot n.. The OED says nothing of this under gigolo n., where its first quotation is from 1922. However, the observation under giglet is surely pertinent: “the 14th cent. form gigelot(te seems to point to a French (or Anglo-Norman) etymon, but nothing satisfactory has been found”. Yet the word was productive in Middle English, yielding also a substantive ğigelotrīe which is equally missing in French, insular and continental. It is hard not to conclude that a medieval form must have existed in French, and that it underlies the forms which only resurface in the popular language of the nineteenth century. But that is to stray into a whole separate debate, about the historical origins of popular French, which would take us far from Anglo-Norman. 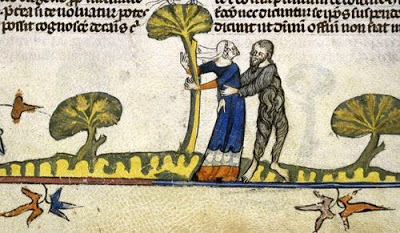