Word of the month: Some Italianisms in the Port Books of Southampton 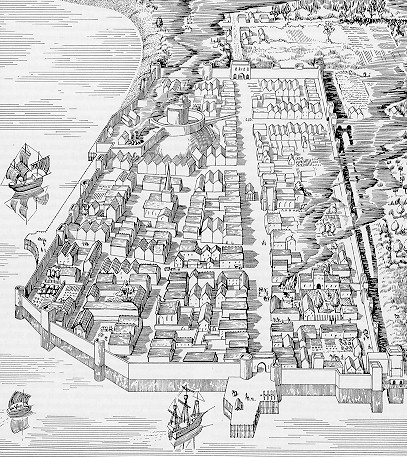 A map of medieval Southampton based on the Terrier of 1454: http://3dvisa.cch.kcl.ac.uk/paper_jones.html

My previous AND blog [July 2016] on luxury fabric colours introduced the study of Anglo-Norman / Italian language contact, an area which has been largely overlooked by academics so far.[1] Tuscans, Genoese and Venetians played a crucial role in the economy of late medieval England and Italian merchants and bankers could be found in many social niches. They dominated the textile and wool markets, they were the main importers of sugar and spices, they acted as personal money-lenders to the King and ran the Royal Mints, they worked closely with the London Guilds (such as the Worshipful Company of Grocers) and they were the undisputed European masters of shipping. One of the aims of my recently submitted PhD thesis (Money Talks: Anglo-Norman, English and Italian language contact in medieval merchant documents, c1200-c1450) is to uncover probable Italian borrowings in the AND2 which have, so far, not been identified. Examples of loanwords are as wide-ranging as the Italians’ influence and include silks and brocades (AND damask / baldekin / taffata), dyes (AND cramoisé), financial terms (AND tare1), boat names (AND carrak / tarette), wine types (AND vernage), a high-quality Indian ginger (AND belendin) and a verb for ‘sifting the refuse from spices prior to sale’ (AND garbeler).

This month’s blog, however, looks at some of the handful of entries in the AND2 which are already labelled as ‘Italian’. All three are found in two sets of Anglo-Norman records tracking imports to and exports from the busy port of Southampton, a major destination for Genoese carracks and Venetian galleys in the 1400s. Rather than sailing in and out of the harbour with no interaction with locals, we have evidence that Italians became very much part of the life of the town. For instance, there are surviving records of 134 Italians – listed as Genoese (78) / Venetians (20) / Florentines (15) / Italians (12) / Lombards (9) – who were residents of Southampton between 1431 and 1472.[2] The diary of Luca di Maso degli Albizi, captain of a state galley from Florence, details his stay in the Hampshire town in the winter of 1429-30 where he lodged with a wealthy ship owner, William Soper, and was wined and dined by local dignitaries.[3] Italians even became civic officials themselves: the Venetian, Gabriel Corbizzi, was Port Steward in the 1440s, overhauling the office accounting along Italian lines.[4] More impressively, the Florentine Cristoforo Ambruogi (Christopher Ambrose) was twice elected mayor of Southampton in 1486 and 1497, a rare privilege for an ‘alien’ in England at the time.[5] Finally, Stewards’ Books from 1487-88 and 1492-93, written in Middle English, reveal that Southampton townsmen and Venetian galley crew worked together on several occasions to fell timber in the New Forest and build derricks (or scaffolding) on the dockside to unload cargo.[6] Italian loanwords also feature in these sources, e.g. maregon (‘ship’s carpenter’) < Venetian marangóne. In all these situations, it is fascinating to imagine how the English and Italians involved communicated and how loanwords moved from one language to another.

The route followed by the merchant galleys from Venice to Southampton: http://www.crossingtheoceansea.com/OceanSeaPages/OS-68-JohnCabot.html

The Port Books of 1427-30 were edited back in 1913 by Paul Studer and he was the first scholar to recognise an Italianism in an insular French text: “As the word is of Italian origin, cf. Ital. fangotto, it may well have been introduced into England by the Genoese settled in Southampton”. He also notes enthusiastically that “the word must have been quite familiar to Southamptonians of A.D. 1428, seeing that it was commonly applied to bundles of exported cloth (!)”[7]

The loanword fangot is used eleven times in Port Book entries between 1428 and 1430 and reappears as fangottis in a Latin Port Book from Southampton from 1440:

In 1474, we also find fanget of cloth in a Middle English account, from the Guildhall in London:

Fangotto is a lesser known variant of Italian fagotto (itself a Gallicism from OF fagot ‘bundle of sticks / firewood’): TLIO fagotto (att. 1348).[8] The word developed a new meaning of a ‘bundle of cloth’ but this specialised use is not found in France, only in Italy and England. It was still being used in this way in northern Italy in the nineteenth century, according to Giuseppe Olivieri’s Dictionary of Genoese sub fangotto. The borrowed fangot is unusual as, unlike many Italian loanwords in medieval England, it remained in use by English drapers for over three hundred years. We find it in Edward Hatton’s The Merchant’s magazine or Trade-man’s treasury (first published in 1695 with eight subsequent editions) in a chapter helpfully called ‘A Merchant Or Trader’s Dictionary, Explaining the Most Difficult Terms Used in Trade’ :

Another example of a commercial loanword from Italian in the Port Books of 1427-30 is sport or ‘basket’. We also find the borrowing a few years later in the Local Port Book of 1435-36, another set of accounts written by the same man: the Southampton Water Bailiff, Robert Florys. He uses sport over twenty times in total and always with the same five commodities: almonds, raisins, figs, soap and suchre pot (‘pot-sugar’). Interestingly, its use is not confined to the ‘Alien Book’ (the section in the Local Book dedicated to trade with Italians) but also the ‘Common Book’ which deals with everything else. This suggests that, for Robert Florys at least, sport was an everyday part of his business vocabulary.

We also find rarer examples of the diminutive, sportin, which appears to mean ‘small basket’ or ‘half a sport’ in both Florys’ Port Books:

Records of medieval Italian sporta are easy to find. If we look at the OVI corpus, we find over fifty examples from 1318 onwards including this from the Florentine Pegolotti’s merchant handbook where he states that pepper is sold in such baskets:

Sporta even remains in modern colloquial Italian but mainly in fixed expressions such as un sacco e una sporta (‘a large amount’) and dirne un sacco e una sporta a qualcuno (‘to give someone a telling off’). An etymon for sportin is, surprisingly, less easy to find. The obvious candidate is sportino / a but there is no medieval record of the term. Could the name of a round Florentine fruited bread known as the sportina di Pasqua, although not recorded until the 1800s, hint at the earlier existence of the word? 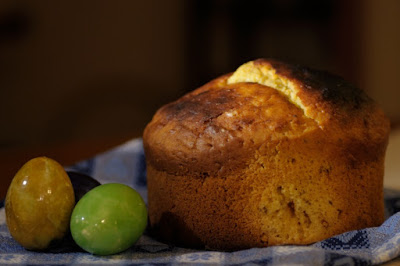 Unlike fangot and sporta, this Italian borrowing is a ‘hapax’ and appears only once in the Anglo-Norman record, with one entry referring to a 100lb barrel of quince marmalade, worth 13 shillings and 4 pence, arriving into Southampton on the 4th of January on a Venetian ship.[9] 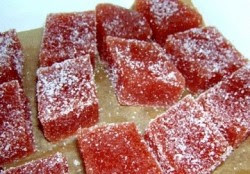 La cotognata is still eaten in Italian today: a traditional confection served in small squares and equivalent to Spanish membrillo. Its first appearance in an Italian text actually records its import into London in 1306 by the Gallerani of Siena, alongside other sweet treats like candied nuts and ginger confit (OVI cotognato). We also know that English cooks prepared their own version of quince preserve with ‘native’ names such as connates and quynade. These terms feature in Middle English recipes from a1399 and a1450 and appear to be compound words made up of variants of ‘quince’ (AND coign1 / OED2 coyn), followed by an –ate / -ade suffix:

The later name codiniac found in English in 1539 (OED2 codiniac), is clearly borrowed from the Continental French variants coudoignac / coudougnac, first recorded in France in the 1380s and themselves influenced by Occitan codonat / quodonat, according to the FEW (II-2, 1606a: cydonem).

However, given the circumstances of this loanword’s use in a Southampton document directly linked to imports from Venice in 1436, Italian cotognato seems the obvious choice for our lone example of cotegnate. Overall, what is interesting about the Southampton material is that in all three of our loanword examples, the writer could have used a range of pre-existing Anglo-Norman or Middle English terms: e.g. bundelle / fardel for ‘bundle’, couple / frael / paner for ‘basket’, connates / quinade for ‘quince paste’. But instead, Robert Florys chose (consciously or not, we will never know) to borrow a term from Italian instead. [MST]

[2] This data is available on the England’s Immigrants 1330-1550 website, a project based at the University of York and directed by Prof. Mark Ormrod.

[3] This Tuscan source is transcribed in full on pp.207-80 of Michael Mallett’s The Florentine Galleys in the Fifteenth Century (London: Oxford) from 1967.

[6] See Alwyn Ruddock (1944): ‘The Method of Handling the Cargoes of Mediaeval Merchant Galleys’, in Bulletin of the Institute of Historical Research, XIX: 140-48.

[8] The Tesoro della Lingua Italiana delle Origini (TLIO) is available online at tlio.ovi.cnr.it/TLIO/ but hyperlinks cannot be made to individual entries.