Word of the month: quyne, the ‘evil monkey’?

In the first edition of the AND we find the entry quyn (currently also online, until work on the second edition of Q- is completed, sometime in 2015). The word is defined as ‘(term of abuse) monkey’ and is illustrated by a single attestation from Nicholas Bozon’s Life of Saint Margaret:

Sister M. Amelia Klenke published her edition of Bozon’s text in 1947, and translated this particular line somewhat oddly as ‘That which befell this luckless fellow (evil monkey)’. The ‘luckless fellow’ in question is Malchus, the executioner instructed to behead St. Margaret of Antioch. After a vision of a white dove bearing a cross, Malchus had come to the realisation that St. Margaret was favoured by God and consequently he refused to carry out the execution. It is only at her insistence that he beheads her:

‘If you do no lay hand upon me

You shall have no part with me in heaven’ 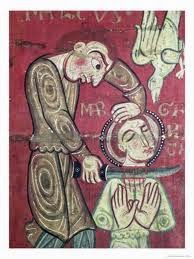 Bozon then wonders what became of this Malchus, but assumes

‘Because of her – full of virtue –

I think he came to a good end.’

The question is why and how this remorseful executioner is called a ‘mal quyn’? And what exactly is he called? The translation ‘monkey’, favoured by Klenke and AND#1, is problematic. It is not just the apparent inappropriateness of the phrase ‘evil/bad monkey’ to describe the hesitant executioner and Klenke’s bold (and ultimately unfounded) attempt to readjust the register to ‘luckless fellow’ that look suspicious. Klenke probably based her interpretation on Godefroy (6,515a), where quin is defined as ‘singe’ (‘monkey’). Godefroy provides only one attestation, taken from Jehan Le Maire de Belges’ early sixteenth-century (post-medieval!) Le triumphe de l’Amant vert:

‘Together with me, the monkey and the marmoset,

Whose sadness already announces their death,

The word is not found in other dictionaries of medieval French (DMF and T/L, whereas the online DEAFpré contains merely a reference to the AND entry). The FEW and TLF confirm the existence of this word and sense, which they see as the origin of the expression faire la quine a (‘to mock someone by grimacing or making hand gestures (like a monkey)’); see FEW 21,218 (singe) and 22,56 (grimace) as well as TLF quinaud. Both dictionaries rely on the single citation of the word quin in L’amant vert as the basis of their etymological argument, and concede that the origin of this word remains unknown.

We may well wonder whether this obscure word from Continental French, unattested before 1510, has any relation to Bozon’s early fourteenth-century use of the word ‘quyn’ in Anglo-Norman. 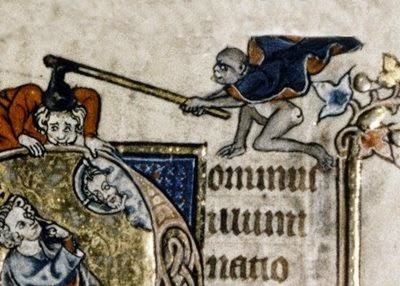 The AND offers a number of alternative interpretation for this word that should be considered. Two options, i.e. quin either as a variant form of quint (‘fifth’) or as a contraction of qui and en (see qui#1), can be discounted as semantically or grammatically impossible. Next there are the relatively common entries coign#1 and coign#2 with senses that could perhaps be more relevant to this passage. Although the form quin (or quyn) is currently not listed in either of these articles, they are formally close enough to be considered possible graphies (coign#1 has coin and the plural quuins, while coign#2 lists cuin and the plural quinnes).

Firstly, coign#1 is the Anglo-Norman word for ‘quince’ or ‘crab-apple’. The same word occurs also in Middle English, coin n.2, and the MED lists the variant quin. The comparable Modern English phrase ‘a bad apple’ (to refer to a troublesome or despicable person) is too recent (dating from 1964 according to the OED, apple n.) to be applicable here. And whereas a word like pume was sometimes used in Anglo-Norman to refer to an object of little value (cf. ‘ne valer une bele pume’, sub pume), the same usage is not found for coign#1 (in A-N) or coin n.2 (in Middle English).

Secondly, Anglo-Norman coign#2 has a wealth of senses, all based on the central idea of a ‘wedge’ or ‘wedge shaped object’ (from Latin cuneus): ‘corner’, ‘axe, chopper, cleaver’, ‘anvil’, ‘stamp’, and ‘coin’. Is St. Margaret’s executioner being referred to as a mal quyn because he is a ‘bad penny’, i.e. ‘a disreputable person that turns up again’? According to the OED, this figurative use of a bad penny with reference to a person already appears in Middle English, for example in the C-text of Piers Plowman: ‘Men may lykne letterid men […] to a badde peny’. Is Bozon’s mal quyn an Anglo-Norman parallel of this image? Another interpretation, also supplied by coign#2, is that mal quyn means ‘evil axe’. Although not otherwise attested in Anglo-Norman, such a phrase could be a suitable metonymic reference to an executioner. 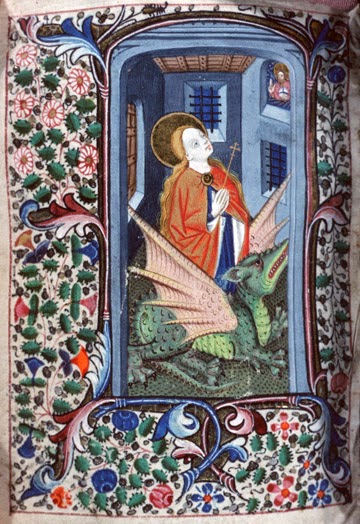 Although both the terms (‘bad penny’ and ‘evil axe’) are semantically just about possible as interpretations of the phrase mal quyn, they do not seem to fit the context of the narrative very well. As mentioned before, Bozon expresses sympathy for Malchus: not only does he make him acknowledge St. Margaret’s holiness, he also goes out of his way (‘Jeo ne ay pas trové en mon Latin’ / ‘I have not found [it] in my Latin [source text]’) to acknowledge that Malchus must have come to a ‘bon fin’. From that perspective, calling him ‘a bad penny’ (a source of irritation that keeps returning) or an ‘evil axe’ (expressing cruelty) seems unlikely. As such, even the use of the adjective mal#1 (defined as ‘evil, wicked’, ‘harsh, painful’, ‘faulty’ or ‘sick’) seems to jar with this altogether positive and respectful portrayal of St. Margaret executioner.

Finally, the phrase may have to be interpreted in a completely different way, with the confusion arising from Klenke’s presentation of the text. It is intriguing that if we read malquyn as one word, it is not very far removed from the executioner’s name, Malchus. Earlier in the text, Bozon refers to him as ‘celi Malcus nomé’ / ‘him named Malchus’ (l. 293), and, as mentioned earlier, ‘c’ and ‘qu’ are common graphical variations in Anglo-Norman. If Malquyn is simply a form of the executioner’s name (with the –yn ending used to rhyme with latin in the next line), the above interpretations of ‘evil axe’ or ‘bad penny’ may still have been an oblique verbal puns on his name. More likely the term quyn should be considered a phantom-word and consequently will only be included as a bracketed (i.e. rejected) entry in the second edition of the AND.