Word of the Month: Purple

As the editors of the AND work their way towards the end of the revision of the letter ‘P’, one of the entries being rewritten is that of the colour purpre, that is, ‘purple’[1]. Defining what that means is trickier than it first appears, as is often the case with colour words. Is purple a colour in the pink/red family or is it a shade of blue? To further complicate matters, there are in fact numerous words used in Anglo-Norman to refer to different shades of purple, some of which we’ll look at here.

Purpre derives from the Latin purpura [DMLBS 2584c], and doesn’t refer always to the colour we now know as purple. Originally, the term referred to the shade of dye obtained from a sea snail, which was a variable crimson or reddish shade, which is also known as Tyrian purple. The blue-purple colour found in medieval manuscripts is often plant based, normally from the plant known as turnsole though this colour was also created using a variety of other plants and berries.[2]

The first edition of the AND only lists one citation using the word as a colour adjective, implying that its sense was evident. This will certainly be remedied by the current revision, and the new entry will give a better idea of the scope of the use of the adjective. As a substantive purpre is used in Anglo-Norman to refer to the colour as well as, specifically, to purple cloth, often in reference to imperial robes. Purple cloth and dye were particularly costly and became associated, from Roman times, with the emperor, the pope and royalty. 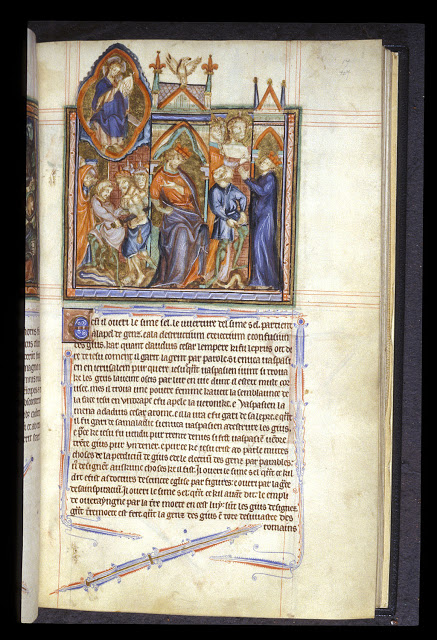 Purpre was also used to designate the purple colour used in heraldry, a term that continues in use today in English in the form purpure. The colour was used, for example, by Henry de Lacy, 3rd Earl of Lincoln on his arms as described in the Falkirk Roll:

These arms would be incorporated into those of Lincoln’s Inn, one of the four Inns of Court in London.

There are a number of derivations of the word purple in the AND. Purprin is used with the meaning ‘crimson, purple’ and as a noun refer to a type of cloth. We also find the related purprie, meaning ‘purple’ (which should perhaps be read as purpri[n]e?) and purprine, a type of cloth of that colour. We also have the related enpurpuré, meaning ‘made purple’. Purpurine was also borrowed into Middle English and was used to refer to things of a purple or scarlet colour, frequently in relation to cloth. Empurpled is equally used in English but is a post-medieval creation.

An unusual variant is the form furfuré, which is only attested once in an interesting Anglo-Norman glossary of Arabic words from the beginning of the fourteenth century:

(Anagales [i.e. pimpernel, Anagallis], this is an herb which has two flowers, one red and one purple.)

We also have a single attestation for the word purpuresse, meaning a woman who sells purple cloth or dye. This word seems to have been created specifically in reference to St Lydia of Thyatira in medieval biblical translations of Acts 16:14-15, as we see it used below in the Anglo-Norman Bible, and in equivalent passages in English translations (see the OED purpuress). 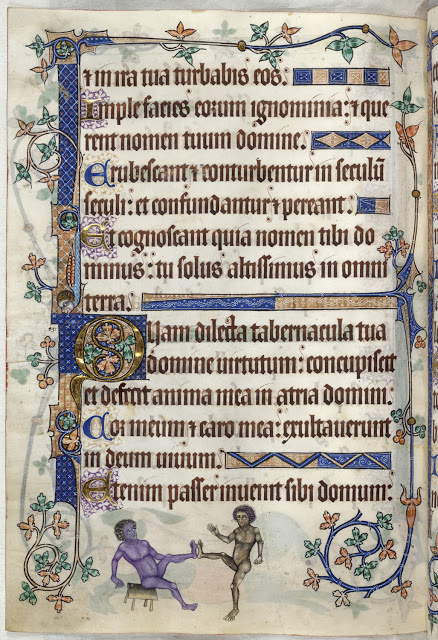 Purpre isn’t the only term you can use to refer to the colour in Anglo-Norman. We have the entry violet , which, however, currently doesn’t list any attestations in reference to the colour rather than the plant from which the colour derives its name. This is surprising as the term violet is used in Middle English by the fourteenth century in reference to this colour. It is likely we will add this to the dictionary when we come to the revision of ‘V’! The colour is however attested in the entry for viole:

(amethyst, which is of a mixed colour, of violet and pink)

The word garance referred to the shade obtained by madder dye, a deep reddish purple, though our citations show that this was considered closer to red than purple as it glossed the Latin rubea, and was synonymous with ruge (red) and vermeil (vermilion):

The words inde and yndois refer to the colour obtained by the use of indigo, generally a purplish-blue colour. This appears to have been a colour distinct both from azur (‘blue, azure’) and from purpre.

(and it (the phoenix) had a completely yellow neck, the colour of a shining oriole and an indigo back and wings of a purple colour)

Jacintin is also used to refer to a purplish colour, in metonymy with the reddish blue, or purple colour of the hyacinth. English jacinth also referred to a blue-coloured stone, though in modern usage, it refers to an orange gemstone. The Anglo-Norman context does not solve the ambiguity as to which colour the term refers to:

(The prince of priests, well dressed in a jacinth-coloured stole)

We also find several uses of terms derived from the Gaelic word for purple (corcur) in the AND. Cork or corkir is the English term used for a lichen from which one can derive a reddish-purple dye, and appears as either cork or jarecork in Anglo-Norman. It appears side by side with another species of lichen used to dye fabric purple, orchil in English:

(any such fabric, which once made will be dyed with orchil or cork called jarcork) 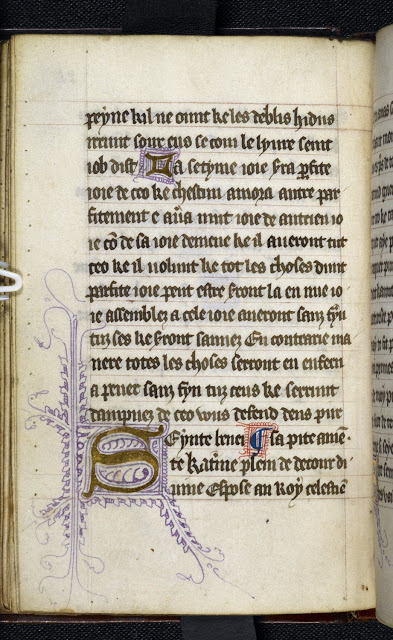 One final way to describe something purple in Anglo-Norman is with the adjective muré, referring to the reddish-purple colour of mulberries or mure. Once again this term can equally be found in English, as murrey, though it is used primarily to refer to the colour in heraldic descriptions.

(For a dress of red samite, for another gold dress from Turkey in which she was married, for another dress of crimson velvet, for a corset of mulberry tartarin and for another tartarin robe)

‘Colour’ is one of the new semantic tags that has been added to AND definitions during the present revision and later this year users will be able to search by this tag to discover all the Anglo-Norman words for a variety of colours. There are currently 180 colour words in the AND just waiting to be discovered.

[1] While we now use the word purple to describe the colour, the term purpure is well attested in Middle English, as well as in Occitan, Catalan, Spanish, Portuguese, Italian. Similar terms exist in the Germanic languages as well, including Swedish, German and Dutch. See the etymological discussion in the OED for the entries purpure and purple for a more developed discussion of the dissimilation process which shifted the pronunciation of the word, in English, from purpure to purple.