Word of the Month: PIE!

Who doesn’t love pie? The love of meat pies, or pasties, dates back to the Middle Ages – the OED notes that the earliest use of the word pasty dates from 1296, first used as a surname. Do you think Adam Pastey was so named because he made pasties or because he loved to eat them? 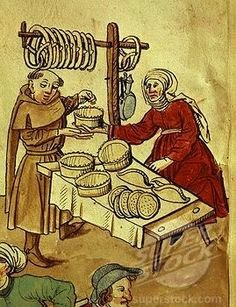 Image from the 15th century chronicle of Ulrico de Richental

The OED suggests that the word pasty came from the Anglo-Norman word paste. Paste derives from the Latin pasta [FEW 7,744a; DMBLS 2138b pasta] and is used for dough, as well as things that are pasty, like glue, mush for animals or medicinal pastes.[1] Amid these senses, the idea of ‘meat pie’ stood out like a sore thumb.

We decided to have a closer look at the citations currently defined in the AND as ‘pie’:

(That no baker, who makes large loaves of unsifted meal, should sell his flour to cooks in order to make pies)

While these were originally read to be paste, the editors now think that these citations represent the word pasté, that is, that the final syllable was accented. The word may have begun as a past participle of the verb paster, ‘to bake’. These will now be given their own entry, and their etymological link to the English pasty is more evident. 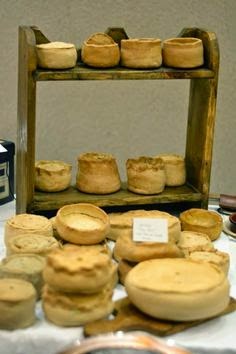 Despite all the baking and kneading going on in Anglo-Norman – you’d have a pasteir or pasteler or pestriser to paster or pestrer your pies – we were having difficulty locating any pastry. The OED suggests that the word is a derivation of paste or perhaps related to the Latin pasteria ‘kneading trough’ [DMLBS 3128c]. Within the OED’s entry, we found a use of the Anglo-Norman word (and a Middle English one!) within a Latin text (this type of cross-language borrowing is very common for the period):

(One table for the pastry, called a pastry-board) 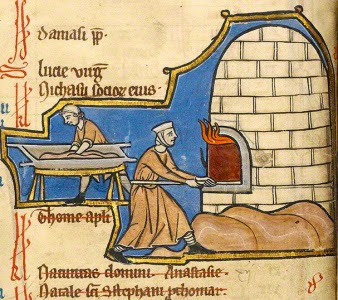 Additional proof of the Anglo-Norman word was found in a series of glosses on the Latin word pastillos (vendendo clericis pastillos; ‘clerks selling pies’ TLL i 198) glossed as pasteus (pastel, ‘pastry, pie’), pastriesz and pasteys. Here pastriesz seems to be used in the sense of ‘pasty, pie’.

The revision of P has turned up a number of words that are alluded to in the OED’s etymologies, but which seemed to be missing from the AND. If you would like to hear more about paste, pasty, pastry and other ‘missing words’ in Anglo-Norman, the editors are giving a presentation on this topic at OxLex 4, at Pembroke College, Oxford, on March 25th.