Word of the Month: ‘Organe’

Pending online publication of the second edition of ‘N’, AND revision work continues with the editorial team currently gathering information, citations and references for the letter ‘O’.

To offer a glimpse of the process: it has already become apparent that while AND#1 only had one entry for organe, AND#2 (the second, online edition) will have (at least) two: one musical and one herbal.

The first entry (which was already present in AND#1), now becoming organe1, is derived from Latin organum. The word can be traced back to Greek οργανον, which originally referred to a tool or instrument to work with (cf. εργον, Greek for ‘work, task’), and more specifically to a musical instrument. That latter meaning persisted in medieval times, and the DMLBS lists as its 5th sense: ‘musical instrument that can be tuned’ (DMLBS 2053a).

Whereas the modern musical sense of ‘organ’, i.e. an instrument using pipes sounded by keys, is already well-attested in medieval Latin organum and Middle English organ(e, surprisingly no unambiguous examples have yet been found in Anglo-Norman. In contrast, all occurrences (both as a singular and a plural noun) seem to refer to a stringed instrument or lyre, for example:

[Translated in the King James Version as: By the rivers of Babylon, there we sat down […]; We hanged our harps […] upon the willows]

[The people of Hellas, when they wanted to perform on musical instruments, harp, viol and lyre, drank good wine, because then they found themselves in a better mood and with a more refined ingenuity to make songs, creations and melodies] 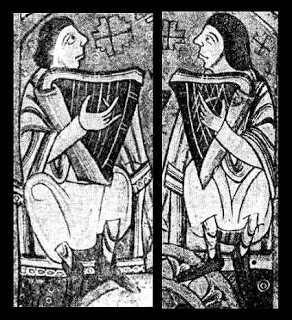 Anglo-Norman also has the word orgues (always attested in the plural), which is an abbreviated form of the same Latin root organum. Again it seems to be used with reference to musical instruments. Trivet’s Chronicle provides a new attestation of the word being used referring unquestionably to an organ:

[Gerbert […] constructed an organ that played without the help of man]

The chronicle refers to Gerbert of Aurrillac who famously constructed a hydraulically powered pipe organ for the cathedral of Reims in the late tenth century.

AND#1 provided only one attestation of the abbreviated form, together with the definition ‘organ’. However, that example is, after all, ambiguous:

[the singing of angels and the sweet organs/lyres/instruments (?) of the saints]

The context does not specify which particular type of instruments may have been used by the saints.

A second new citation for AND#2 provides a very different interpretation, as it uses the word to refer to birdsong:

[The birds sing, the nightingales bring out their songs]

This particular (perhaps figurative) usage of the word is also found in Latin (DMLBS organum, senses 8. ‘song, hymn’ and 9. ‘music, esp. vocal’) and English (MED, organ(e, sense 3 ‘a sung melody’). The reference to bird-song is, however, unique to this Anglo-Norman attestation. In any case, it adds to the ambiguity of the above Eluc attestation, where the saints may well have been singing hymns, rather than playing any instruments.

The abbreviated form orgues, while also well-attested in Continental French (see DMF orgue), is rare (and obsolete) in English, with OED listing only two examples (also meaning ‘organ’) from the 18th and 19th centuries.

It is surprising that the other senses associated with Latin organum (and also well-attested in medieval and modern English), such as ‘bodily organ’ or ‘instrument of speech’ or ‘device’, currently have no attestations at all in Anglo-Norman – though, of course, work on the second edition of ‘O’ is still on-going. Do send us a message if you come across any examples.

The second organe entry for the AND, which will be new in the second edition, refers to the plant ‘wild marjoram’ (or a variety of similar plants with aromatic leaves). As it is has a different etymology, derived from the Latin word origanum (DMLBS 2054b), the word will be given a separate AND entry. 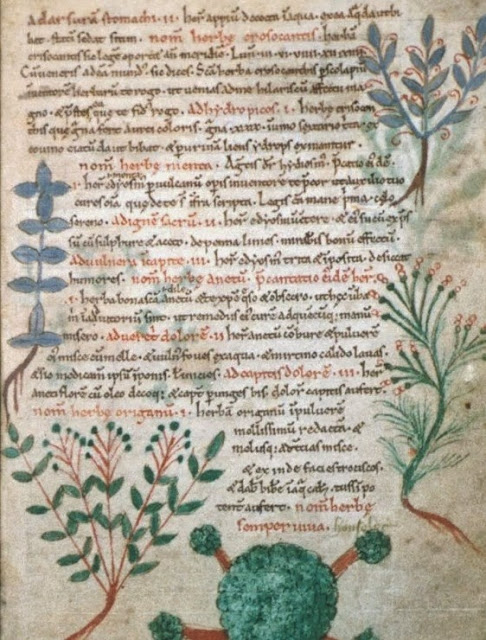 This plant-name is attested frequently in Anglo-Norman (mainly as an ingredient in medical treatises) and with many spelling variants, some of which are closer to the Latin form (such as origan or origanon) while others deviate further (orgon, orgoyne, etc.):

[Item, a powder to purge the head: [take] ‘gilgano’ (=unidentified), ginger, pellitory, marjoram and  hyssop, and mix it with honey and vinegar, and rinse the mouth]