Word of the month: ‘ombre’ and a botanical mystery!

A new word of the month to announce that the entries for O/U are now revised and online! To celebrate being finished, here’s an account of one word that was a bit problematic.

One of the advantages of moving to an entirely online platform for our dictionary is the ability to return to earlier entries and revise them as new texts and new citations come to light. As the editors were preparing the revision of the articles under O- and U-, the following citation taken from a medical receipt proved to be a case in point:

‘[For] herpes, mange and ringworm: ‘ombre de fosse’, that is feltrike, knead together with pork grease and leave it forty days in balls’

This citation brought to light a number of additions and corrections to the dictionary. Firstly, deytre, a variant of dertre, was unattested in AND2 though it has now been added to the list of variants in that article. Secondly, feltrid, was listed as a variant under the headword feltrey, however, a closer examination of the above citation suggested that the term could also be a ME gloss of the term ‘ombre de fosse’, defined as ‘common centaury?’ and only attested in one text.

Feltrike is a variant spelling of the Middle English felterre n. as the MED attests and a corresponding entry can be found under feltriken. in the OED. The name feltrike, more commonly known as earth-gall, is a literal translation of the Latin fel terrae, with, according to the MED, a substitution of rike, ‘realm’ for terre ‘land’. It is also known in modern times in Latin as Centaurium erythraea or Centaurium umbellatum. 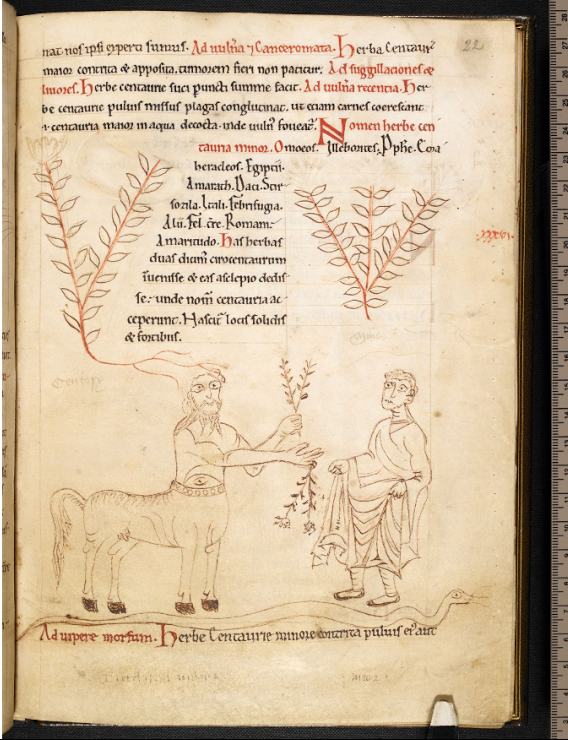 A comparison of this citation to other medical receipts for herpes revealed two other citations:

‘A good drink against herpes […] honeysuckle, ‘lumbre de fosse’, this is withered, feverfew […]’

The first of these citations was also referenced under the verb flaistrer where flectrit was listed as a deviant form of the past participle. However, in comparison to the first citation, it seems evident that flectrit is in fact a metathesized spelling of feltrey, and like in the first citation, is glossing the locution ‘lumbre de fosse’, which should probably be read as l’umbre. A further recipe in that collection gives yet another variant reading of the word, as flectriz, in a fully Anglo-Norman context this time and not as a gloss:

A final citation shows another use of the mysterious herb umbre in a medical receipt. This one proved no more elucidating and in fact the manuscript may be corrupt at this point.

‘For illness of the spleen: Take betony and pigeon droppings and cephalica and rose oil and ‘the brief umber of the umber of the small place’ and hart’s tongue fern […]’

The term ‘lumbre/ombre (de fosse)’ remains unidentified. It is clear by the glosses that the term was meant as a synonym of feltrike, but no equivalent construction could be found in Continental French or Latin or English. The word then translates as ‘centaury’, centaurée in French, which is attested in most dictionaries (FEW centaurea 2,583b; Gdf centoire 2,17a; DMF centoire; TLF centaurée), but bears no similarity to the above word

While the word resembles the word for shadow (umbre) or for navel (umbil), neither of these terms could be found to refer to a similar plant and while formally similar to ‘umbre de mer / rivière’, a type of fish (FEW umbra 2 14,25b), the context of the above citations implies a plant. It does not appear to be related to lumbric, ‘earthworm’ despite its similarity in form. Although semantically possible, the word lumbric is not attested anywhere used in a collocation with fosse.

The FEW’s section on medicinal plants as well as unidentified plants (21,177-184) did reveal that the term ombelle is used to refer to the plant Euphorbia peplus. This particular type of plant lacks the distinctive purple/pink flowers of centaury, however, it a commonly used plant for treating skin lesions and so may be associated with the treatment for herpes.

The second portion of the plant’s modern Latin name, Centaurium umbellatum, refers to the fact that the flowers are bloom on pedicels – based on the Latin umbella. Umbella does not seem to have generated any botanical terms in the vernacular (FEW umbella 14,17a contains one 17th century use to refer to a cornflower). While ombre may be an isolated reflex of this Latin word, at least for the time being he term umbre de fosse remains a mystery, and will be included as such in AND2. Go and have a look. In the meantime … we welcome any suggestions!