Word of the month: nuncheon

It is mid-afternoon and the editorial team of the Anglo-Norman Dictionary is producing XML files of the latest batch of new entries for N-. They have been sitting in front of their computers and processing the data for about six hours now, and their typing fingers are noticeably slowing down. It is still too early to call it a day, but minds are inevitably beginning to wander. Fortunately, a resolution for the growing three-o’clock malaise is found in the Oxford English Dictionary under the word ‘nuncheon’, that is, ‘a drink taken in the afternoon; a light refreshment between meals; a snack’.

‘Nuncheon’ is a word labelled as archaic or regional – the sort of vocabulary encountered in nineteenth-century novels: Sir Walter Scott still wrote ‘I came to get my four-hours’ nunchion from you’ in his novel Fortunes Of Nigel (1822), and in Charlotte Mary Yonge’s Love and Life (1880) a sister tells her siblings ‘I will give you some bread and cheese and gingerbread for noonchin’.

The word has a suggested etymology which traces it back to an Old English compound of ‘noon’ and ‘shench’. Its first half, ‘noon’, is derived from Classical Latin ‘nona’ (DMLBS nonus 1929a), meaning the ‘ninth hour of the day’. In Roman and consequently ecclesiastical time-keeping this would originally have corresponded with 3 o’clock in the afternoon, although in the course of the Middle Ages the word became more and more used (both in Middle English and Anglo-Norman) to refer to an earlier time of day (see AND second edition sub none1, forthcoming). It has been suggested that monastic orders, who had their lunch after the ‘ninth hour’ liturgy, were inclined to perform that service earlier and earlier, so that the term ‘noon’ eventually became associated with midday. In ‘nuncheon’, the first half of the word has retained its original meaning of mid-afternoon. The second half, Old English ‘shench’, can be translated as ‘a cupful, drink (of liquor)’. It is derived from the Old English verb ‘scencean’ (‘to pour out a liquid’), which is still found in Modern German and Modern Dutch (as ‘schenken’) and even Modern English (as ‘to skink’, labelled archaic or Scottish). Somehow that word became shortened, losing the final ‘ch’ or ‘k’, to produce the second half of ‘nuncheon’. 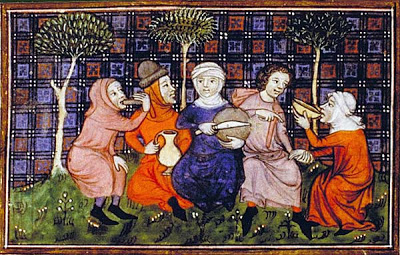 The only explanation the OED can provide for the modification of the word ‘shench’ in the second half of ‘nuncheon’, is that this may have happened through similarity with words such as ‘puncheon’ and ‘truncheon’. It is also pointed out that a semantic and formal analogy with the word ‘luncheon’ is almost inevitable. Even so, this does not resolve the matter as, also the ending of ‘luncheon’ is etymologically unclear, and there is not enough chronological evidence to determine which word may have affected which. Although ‘lunch’ is usually considered an abbreviated form of ‘luncheon’, the OED can only see the etymology of the word as ‘related in some way’ to ‘lunch n.2’, originally meaning ‘a thick piece, hunch or hunk’, which then acquired an apparently superfluous and meaningless ‘-eon’ suffix. While this leaves us with a not entirely satisfactory or even plausible explanation, it should be noted that the Old English ‘shench’ survived in Middle English with a great number of variant spellings, such as ‘chins’, ‘shins’ ‘sens’, etc. (see MED shenche) which all shift the final velar consonant forward in pronunciation to a sibilant. Forms like these may well have produced an incorrectly derived singular form ‘cheon’.

The word is unmistakably English, but it appears surprisingly late in a truly English context. The earliest such attestation, both in the OED and the MED, is from 1422-23, taken from the account book of the London Brewers’ Craft, and lists a payment received by two carpenters for making a gutter, which includes money for their nuncheons:

There are a several earlier examples, but these all use the word in the context of a different language. It appears as a vernacular word in a Latin context from 1260-75 onwards, for example, in the account of Bury St. Edmunds, where a payment is listed, this time to the carters, for their nuncheon:

In some instances, the word was even given a Latin ending, justifying the DMLBS entry nonshenchus: in a document from 1375, among payments listed, one states:

In a similar but later example (from the Church Wardens’ Accounts of Saint Michael’s Church in Oxford, 1426-27), ‘Item, pro le nunsens operariorum, vii d.’, the Latin scribe indicates that he is aware that the word is vernacular, but by preceding it by the definite article ‘le’ gives the impression of treating it as a French/Anglo-Norman word.

Finally, also the AND’s source material provides three instances of the word, used in a fully Anglo-Norman context. The earliest of these (from the Exe Bridge wardens’ accounts) is from 1349:

A second example is found in an entry of the account rolls of the wardens of Rochester Bridge 1412-13:

Once more, a payment is made for the nuncheons of three carpenters, included in their days work. (Incidentally, most of the above examples, which are all very similar in nature, suggest that the medieval ‘nuncheon’ may have been more of a proper meal in the middle of a working day, rather than just the drink or refreshment as is suggested by the etymology and the dictionary definitions.)

In other words, what is clearly an English or Old English word first emerges in Latin documents as a ‘foreign’ vernacular loanword in the thirteenth century. We then see it appearing in mid-fourteenth-century Anglo-Norman texts, where it is used as a ‘normal’ French word, and a few decades later in Latin in the same way. It is only half a century later, around 1422-23) that we have the first fully English documents preserved that use the word. As such, the word is a perfect example of the hierarchy and/or chronology of the three medieval languages and the of the documents in which they are preserved.

After their nuncheon, the Anglo-Norman Dictionary editorial team return to their XML editor and continue work on the final stages of the revised edition of N-.