In the first edition of the Anglo-Norman Dictionary (1985, for the M-O/U fascicle), the entry for noche is rather minimalistic: the definition provided is simply ‘notch’, which, obviously, is nothing more than the same word in Modern English. (The -tch spelling is merely an English equivalent for French -ch, as is also found in, for example, hache#3 vs. English hatch, or lache#1 vs. latch, and cache#2 vs. catch). The entry lists only one spelling variant, and contains a single citation, taken from the Yearbooks of Edward II (vol. xvii, p. 179), illustrating the sense:

(‘and he produced a sealed tally stick, which had 16 notches and [an] inscription’)

No indication is given as to whether the word is at all common in Anglo-Norman or whether its appearance here is a ‘one-off’ – a hapax legomenon.

For the second (online) edition of the AND, all words starting with N- are currently being revised (with the results expected to be published in late 2013 or early 2014), and part of the aim is to provide more exhaustive and transparent analyses of words like noche.

Somewhat surprisingly, notch is not attested in Middle English. Instead, the word found referring to the marks on a tally stick is nick (see MED). According to the OED, notch first appears in the English language in post-medieval times: Leonard Digges, in his A geometrical practise, named Pantometria (1571), writes ‘Make a fyne notche, or marke vpon that subtending staffe’ – a usage defined by the OED as ‘A groove, incision, or indentation (typically V-shaped in cross-section) in an edge, or across or through a surface’. Only slightly earlier is its appearance in Thomas Cooper’s Thesaurus linguae Romanae & Britannicae (1565), ‘Crena, a notche in a skore’. The OED’s definition in this case is ‘A nick (usually one of a number of nicks) made on a stick, etc., as a means of keeping a record, score, or total’. In addition, the OED lists sixteen more definitions, which are all considerably later.

It is the OED’s second sense which is relevant for our Anglo-Norman citation from the Yearbooks, and the revised AND entry, in the first place, will have to extend its English definition accordingly to clarify this rather specific meaning of the word ‘notch’.

The evidence suggests that the word notch entered the English language from Anglo-Norman, where it is already attested in 1313-14. The analysis of a great quantity of additional text material in Anglo-Norman (including legal texts, documents, accounts, etc.) undertaken for the second edition of the AND has, so far, retrieved only two further attestations of the word, and they both appear in the same Year Book source. In other words, it still looks as if noche was uncommon in Anglo-Norman. 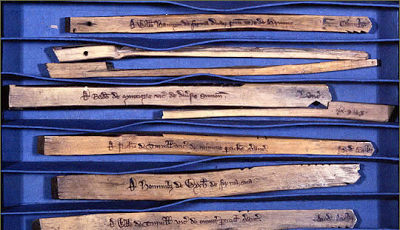 The etymology of notch may explain its initial rarity: the origin of the word can be explained as a distortion of a word also found in Middle French for ‘notch, nick’, osche (see DMF). The nasal at the beginning of the word is believed to be the result of a contraction of the ‘n’ from the indefinite article: ‘une oche’ became ‘une noche’. This was a process that was possible (and occurred) both in English and in French – for example, the opposite happened to the English word ‘apron’, derived from French ‘naperon’: ‘a naperon’ became ‘an apron’ around the fifteenth century; see OED, sub apron. Another example in Anglo-Norman is found in the words nomblil (see AND) and lumblil (see AND) for the latin umbilicus, with both the indefinite article (‘un’) and the definite article (‘le’) producing variant words (cf. OED sub nombril).

oche (with its spelling variant osche) is more widely attested in Anglo-Norman (defined in the AND as a ‘notch’ on a stick, the ‘tally’ itself, or ‘breach, hole’ – see the online version of AND#1), and already appears in thirteenth-century texts, for example in Robert of Gretham’s Miroir:

The tally of the angels was made up again;

And brought the tally back to its incomplete state’)

In contrast, no instances of noche instead of oche are found in Middle French, which suggests that the nasal added to the beginning of the word is an insular process, unique to Anglo-Norman.

The fact that the word ‘oche’ (or any derived form) is lacking in Middle English removes the possibility that the sixteenth-century appearance of the word notch could have been an English phenomenon, i.e that the shifting of the ‘n’ away from the indefinite article happened to a French word that had already been assimilated into the English language. At this stage of the research, the conclusion must be that notch is in fact one of the (many) Anglo-Norman words that found its way into the English language. The long gap of more than two centuries between these Anglo-Norman examples and the earliest English attestation of the word is remarkable, to say the least, and it is questionable whether it can be genuine. It almost seems inevitable that further research into the English source materials will produce earlier examples.

The OED lists a second (rare and obsolete) meaning of the word notch, limited to seventeenth- and eighteenth-century examples, which is ‘nock’, i.e. the ‘small piece of plastic, horn, etc., fixed at the end of an arrow and provided with a notch for receiving the bowstring’.

Work on the second edition of the AND has revealed one more Anglo-Norman use of the word ‘noche’ with precisely that sense:

(‘Arrow head, shaft, fletching and nock are not lacking.

Listen, and you will hear what that means!

His faith is the nock placed into the scotch

Of the crossbow of peace, which God Himself aims.’)

This attestation, found in Chant des Chanz (a text from the second half of the thirteenth century, for more information, see the AND’s List of Texts), predates all of the above Anglo-Norman instances of noche. The question is whether this sense here and the one discussed above derive from the same etymological root or not. This instance of noche must be formally related to English nock (see OED, nock n.1) and Middle English nokke (see MED nokke), the earliest record of which (listed in the MED/OED) is from 1398 – more than a century later than in Anglo-Norman. The OED is uncertain about the etymology of the word nock, but suggests a Germanic context, with cognate (but later) forms in Dutch and Swedish. However, with further attestations that might contradict this lacking, our Chant des Chanz citation suggests that the origin of this word could well be Anglo-Norman again. Furthermore, the implication would be that notch and nock both derive from the same French root, i.e. the Anglo-Norman word that describes a small cut or incision in wood.