In an Anglo-Norman prose lapidary from the second half of the thirteenth century – a study of the medical ‘powers’ of different stones and minerals, claiming to derive its knowledge from a letter which the mysterious Arabian king Evax wrote to Emperor Tiberius – we find the following recommendation:

Leaving aside the question of how effective the use of a piece of red chelidonius would have been in these matters, we would like to concentrate on the word lunage. The adjective derives from lune (Latin luna: ‘moon’), followed by the (normally substantival) suffix –age, and is the Anglo-Norman equivalent to Latin lunaticus. This particular word formation is no longer extant in Modern French and is not found in English. Its primary (and literal) sense is ‘(under the influence) of the moon’ or ‘affected by the moon’, but while in continental medieval French the word can also mean ‘lit by the light of the moon’ (DMF lunage 2), in Anglo-Norman it is only found in reference to a mental and/or physical disorder. A second attestation of the word can be found in an earlier Anglo-Norman lapidary, dating from the beginning of the twelfth century. Here it is advised to place a jet stone on burning coals, and to have the emanating smoke float over a person:

(“if somebody wants to buy a servant, he can very well test whether that person is ‘lunatic’ or gouty or whether he has palsy […]”)

If suffering from any of the above, the lapidary claims, the person within this cloud of smoke will have a fit.

As the etymology suggests, the influence of the moon is essential to the understanding of this word. In medieval times the different phases of the moon were believed to have numerous effects: not only insanity as a disease of the mind (as discussed in the works of Aristotle and Pliny the Elder, as well as in the fourth- and fifth-century works of Julius Firmicius Maternus and Pseudo-Manetho), but also fevers, rheumatism and epilepsy (as observed, for example, in the Vulgate, Saint Matthew, 17-15-18, where lunaticus is used to refer to an epileptic boy cured by Jesus).[1]

(The phases of the moon, as described in Isidore of Seville’s Etymologies, BL, Royal 6 C.i, fol. 30r)

The two Anglo-Norman examples taken from the lapidaries seem to suggest that the ‘lunacy’ or ‘state of frenzy’ in question was more of a physical than a mental nature, and that it is epileptic fits (as brought on by the moon) that these stones protect against. Evidently, from a medieval perspective, the distinction between the two cannot have been as exact as it is in modern science – the word is used to describe the condition of people who are in a state of fitfulness, believed to be a direct result of the effects of the moon.

Anglo-Norman also has the word lunatic as a second adjectival form of lune – also derived from Latin lunaticus, but believed to be a later re-borrowing than lunage (see FEW 15,456a). The word is also frequently attested in Continental Middle French as well as Middle English and has persisted in the modern languages. Interestingly, this is the word found more frequently in Anglo-Norman legal texts, for example in the late-thirteenth-century legal treatise Mirror of Justices:

and in the Yearbooks of Edward II:

(“if an underage child is born a fool, the king shall have the wardship all his life etc. But if he is ‘lunatic’, this is not the case”)

In both instances, the sense of the word seems to be closer to the modern sense, with a person being barred from certain rights or entitlements for reasons of being ‘lunatic’, i.e. presumably prone to fits of insanity. In a legal sense, the word became synonymous with ‘mentally unsound’ and continues to be used in English law to refer to a state of intermittent insanity (OED). 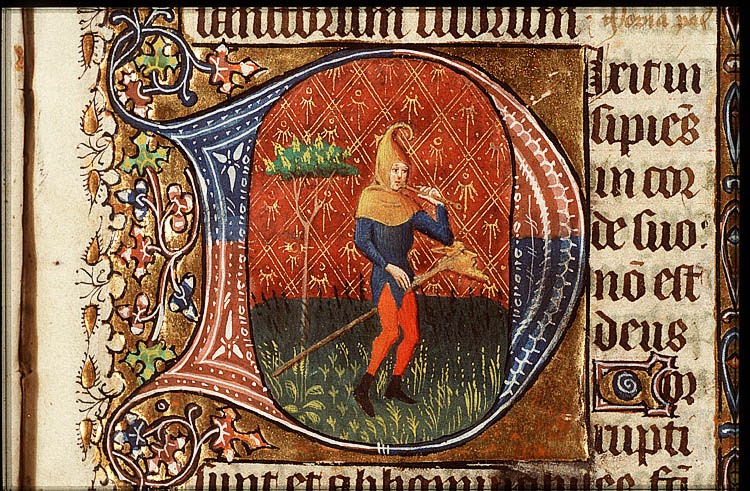 Used as a substantive, the word lunatic in Anglo-Norman demonstrates a wider range of senses once more. In Britton’s judicial compilation of the late-thirteenth century, we find another example, again in a legal context (where the word is often used together with frenetic), of the sense ‘temporarily mentally unsound’:

(“Likewise, ‘lunatics’ and frenzied people may give and alien (i.e. transfer possession), but not during their state of madness”)

A citation from Jean de Mandeville’s Livre des Merveilles du Monde, reminiscent of the above lapidary examples, ascribes an ability to diamonds to cure ‘lunatics’ and, which it seems to consider a related activity, to exorcise the devil:

(“the diamond makes a person stronger and more steadfast against enemies, and cures ‘lunatics’ and those that the devil chases and harasses”)

Returning to medical texts, in the Euperiston, an Anglo-Norman medical text of the thirteenth century, the word is used alongside words referring to those who are epileptic or possessed of the devil:

(“And let it be known that the epileptic and the lunatic and the person possessed of the devil are also similar, as Constantin says”)

and seems to refer to somebody who suffers from fits and paroxysms. 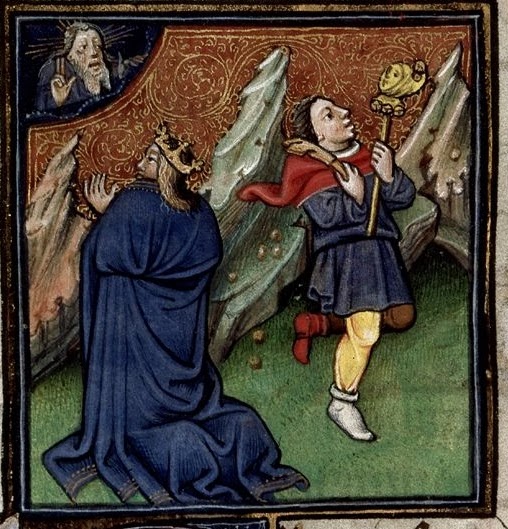 Curiously, Anglo-Norman has three more synonyms to refer to the ‘lunatic’, i.e. the person suffering from ‘lunacy’, that are not found on the Continent and were not borrowed into English either.

The term lunager is found in another lapidary (an alphabetical lapidary attributed to Philippe de Thaon from the beginning of the twelfth century), again in a passage describing the healing qualities of chelidonius:

(“Chelidonius […] gives health to one who languishes in disease, and to the ‘lunatic’ and the madman”)

Whereas in the earlier examples, the power of Chelidonius seems to have been more as preventing the fits of epilepsy, here the ‘lunatic’ is mentioned alongside the forsené (the ‘madman’).

The second synonym, also unique to Anglo-Norman, is lunerasce. In a thirteenth-century account of pilgrimages to Jerusalem, the Saracens are described as

(“they are mad like ‘lunatics’ in that they betray each other”)

Unless the word is to be interpreted as a corrupt misreading of ‘luve[s] [i]rascés’ (i.e. ‘angry wolves’), the ‘lunatic’ here once more refers to a ‘madman’ rather than someone suffering from epilepsy.

Thirdly, the abovementioned passage in Mandeville describing the powers of diamond, appears in a late-fourteenth-century manuscript with the variant reading les lunetus (instead of les lunatiques). Once more, the term lunetus is attested only in Anglo-Norman: instead of the etymological –ic suffix, it uses –us. 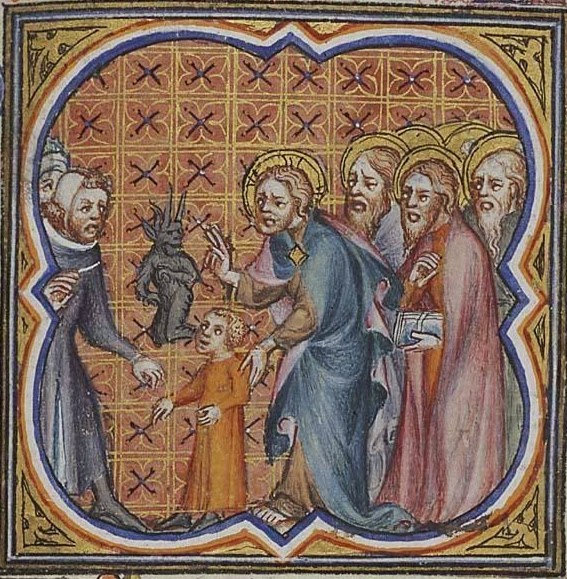 Finally, the term used to refer to the condition of being a ‘lunatic’ is surprisingly rare in Anglo-Norman. In another (and earlier) variant manuscript of the same Mandeville passage, the diamond is not said to cure les lunetus / les lunatiques, but it garit de luneties (i.e. ‘cures of lunacy’). Clearly lunetie must be the same word as Latin lunatia (DMLBS 1660c) and Modern English lunacy. It is, however, unique to this single Anglo-Norman attestation: it is not found in Continental French and appears both in Latin and in English only from the mid- to late-sixteenth century onwards.

A second, slightly problematic, term is lunaison, which has a primary meaning of ‘lunation’ or (according to the OED) ‘the time from one new moon to the next’ as well as ‘the time of full moon’. This is also the main sense in Anglo-Norman, but in the case of two attestations it may be possible to interpret the word as ‘lunacy’. In yet another lapidary (from the second half of the thirteenth century) and once more describing the powers of Chelidonius, it reads:

It is, however, not clear whether the word is used here to refer to the condition one suffers (i.e. ‘lunacy’, a moon-induced madness) or the cause of the disease (i.e. ‘lunation’, the phases of the moon).

The second occurrence is in Hue de Rotelande’s Protheselaus, a late twelfth-century romance:

(“He takes great pleasure in foolish talk; He was somewhat melancholic and could not keep to himself at all: he immediately expressed the thoughts that lay on his tongue. He was governed by the phases of the moon, and suddenly his ‘lunacy’ began”)

The word is used twice in the same sentence, albeit with varying meanings, and, as the text editor confirms, the second time it seems to refer to the condition of mental disorder under the influence of the moon rather than the phases of the moon themselves. Still, the example is far from straightforward.