Word of the Month: Locusts and lobsters

For the modern reader, the words ‘locust’ and ‘lobster’ refer to two very different species of the animal kingdom and at first glance they do not seem to have much in common. ‘Locust’ (the modern English word for an insect associated with migrating hordes that ravage whole areas of countryside, especially in Africa and Asia, by consuming all vegetation in their path) derives from the Old French and Anglo-Norman word locuste ( DMF locuste, from Latin locusta: ‘insect’, locust’, ‘grasshopper’). It is hardly surprising that several textual references we have to locusts in Anglo-Norman sources are from religious texts, as locusts are alluded to not only as one of the plagues of Egypt in the Old Testament Exodus (Ex. 10:1-20) but also as one of the horrors inflicted upon the earth in the Apocalypse or the Book of Revelation (Revelation 9:3-10), the last book of the New Testament. One such text is an illustrated Apocalypse commentary from the thirteenth century:

(“And from this smoke locusts came upon the earth”) 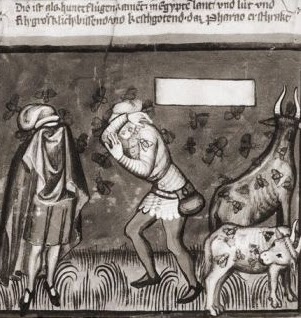 According to FEW (5,397a) the vowel of the stem syllable in the Latin etymon changed several times, and in some forms the ‘o’ would have changed to ‘a’. The consequent vulgar Latin form ‘lacusta’ in turn developed into the Old French form laoste and the Anglo-Norman lauste. This form retained the sense ‘locust’ and can also be found in religious texts such as the paraphrase of the Old Testament from the thirteenth century (Poème anglo-normand sur l’Ancien Testament):

(“Then God made appear flying creatures without number, these were locusts that encumbered the whole earth”) 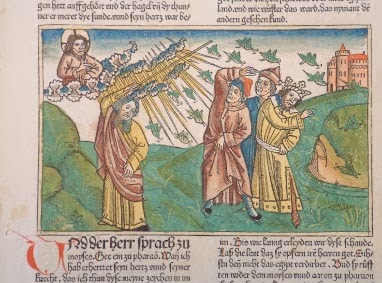 Interestingly, both word, lauste and locuste, are also used with reference to ‘lobster’. In an Anglo-Norman prose lapidary from the thirteenth century, dealing with the properties of engraved stones, we find lauste marine:

(“If you find a lobster in a beryl and beneath its feet a raven […] This stone will guard the love of those married.”)

In another lapidary from the same period, we also find a reference to locuste marine, signifying ‘lobster’, with the same information and instructions for the use of such engraved ‘lobster stone’ as in the citation above (Lapid 286.L.2).

In fact the Latin word locusta (DMLBS 1634a/b) also denotes ‘crustacean’ and ‘lobster’, and the form used in some of the Latin examples reads as ‘locusta marina’ – a form adopted in the Anglo-Norman examples already cited. 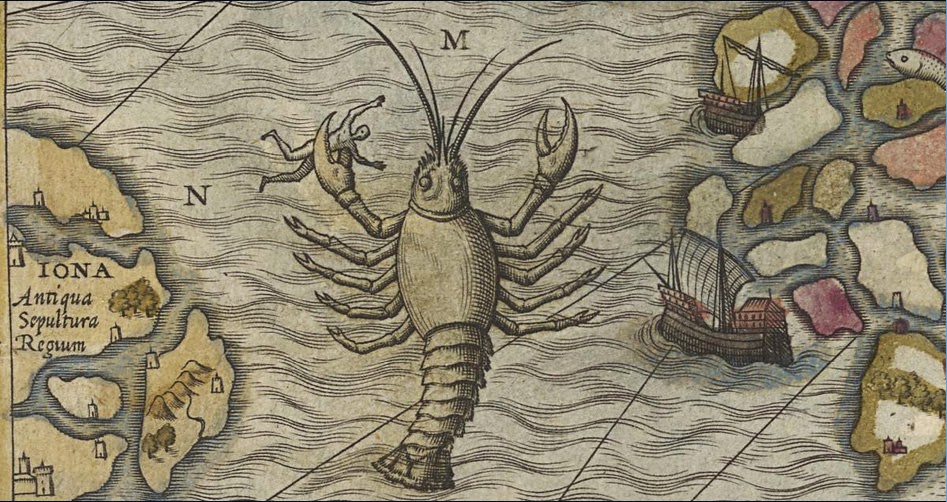 According to the OED (see lobster n.1), the Latin word actually originally signified a lobster or a similar crustacean, and that the application to the locust was suggested by the resemblance in shape. It should also be noted that whereas the modern English ‘lobster’, deriving from an Old English corrupted reading of the Latin etymon (lopustre, lopystre, loppestre), only includes the original sense of the word, in the modern French ‘langouste’, a form already present in Anglo-Norman (languste), both senses survive.