Word of the Month: Lit

The recent windy Welsh weather has certainly made staying in bed an attractive proposition this week! That got us wondering about what the Anglo-Norman Dictionary could tell us about where people slept in the Middle Ages. Beds and bedding aren’t normally things that are described in the types of sources the AND used – there’s never much discussion of home furnishings in literary texts or in administrative documents. Two other types of texts do provide some clues about medieval beds: inventories and wills. These tend to be related to wealthy individuals, so the goods described certainly wouldn’t be typical for the average medieval person. They do provide an interesting glimpse at how the 1% of the population furnished their bedrooms during this period! 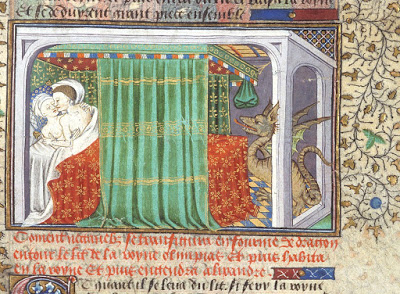 The bedroom was known as the chambre, from whence we get the Modern English chamber, though you can occasionally find the word closet used in Anglo-Norman (and in Middle English) to refer to a private room:

This room seems quite luxurious, with cuissiens, a variant spelling of cussin. As we have noted in that entry, this word derives from the Latin word coxa, which meant ‘hip’, suggesting that these cushions were originally meant to support the hips or upper thighs. By the medieval period, cussin was used to refer to any type of bed-pillow or bolster. This word was then borrowed into Middle English by 1361 where it would take the form cushion.

If you wanted to rest your head rather than your hips, you’d be looking for an oreillier, which is literally a place for your ears (oreille). This term would become synonymous with cussin, referring to any sort of cushion or bolster. It would also develop a heraldic sense, which would be borrowed into English as oreille meaning ‘a representaiton of a pillow or cushion used as a heraldic charge’. Pillow, the most commonly used term in English for a place to lay your head, derives from Old English. We were apparently very attached to our traditional sleeping patterns!

On top of our mattress, a term derived from the Anglo-Norman materas, which was likely filled with litere, ‘straw for bedding’, we would find our bed linen, which was normally referred to as draps, a generic term for fabric which, in the plural, often referred to sheets on a bed. These were clearly valuable items as one poor student, writing home to his parents, confessed that:

(I put in pledge (gave as security) the sheets from my bed.)

I’m not sure you could get a payday loan with your bedsheets nowadays. 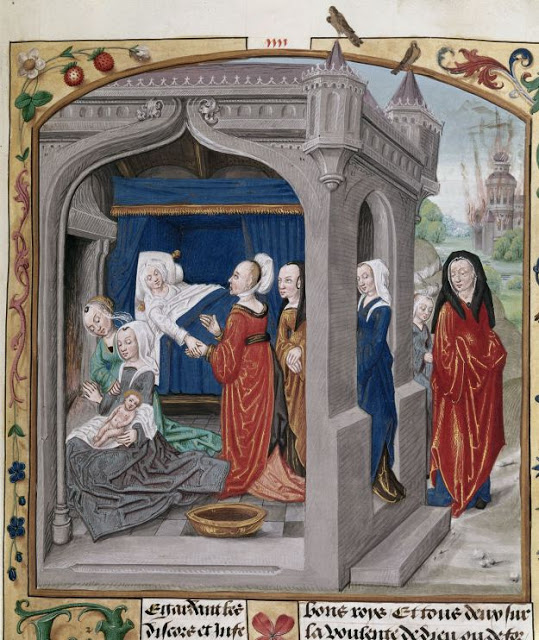 The assortment of sheets and cushions for a bed were referred to as apparail from which we have the modern equivalent of apparel. One can also find it referred to as aurnement which might be more familiar to English speakers as adornament:

[1 ‘tentbed’[2] of baudequin of cloth of gold, made for the queen’s lying-in with two covers of scarlet furred with ermine, with all of the fittings]

Essential on these windy days, the bedframe could be surrounded by cortines, known in English as curtains. On top of the bed would be a canopy (celure or canopé).

[a great bed, with the entire canopy, curtains, cushions, traversin (??), carpets tapestries and the entirety of the other fittings] 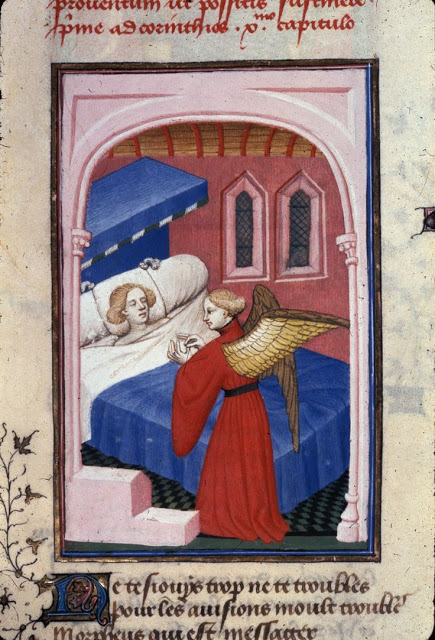 The fabric of the bedcovers and curtains could be quite luxurious and striking:

[a bedcover of ermine […] with the coverlet of the suite included]

[my large bed of cloth of gold, with a blue background powdered with gold roses place on gold piping]

[For a bedchamber of cloth of gold with lozenges containing the arms of France, England and Brabant, that is counterpane, trappings for the bed-head, 8 square cushions and 8 small carpets]

The most essential of all furnishings, especially with winter on the way, must be the chaufelit or bedwarmer! Keep warm!

[1] This citation is taken from the collection of wills from Yorkshire published in three volumes by the Surtees Society, known as Testamenta Eboracensia. The first of these volumes can be consulted on the AND website at http://www.anglo-norman.net/textbase/ .

[2] Likely refers to the canopy of the bed having a pitched rather than a flat roof.