Word of the Month: Horsemanship – The Anglo-Norman Horse (part 2) 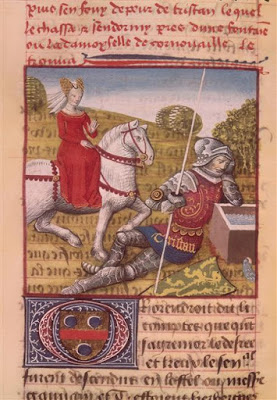 (Tristran took Yseut along with him, Holding her rein as he rode on her left. Katherdin rode on her right, And they told amusing tales as they went along. Such was their conversation That they let their horses roam where they would. Katherdin’s mount wandered across And Yseut’s reared up against it. She pricked it with her spurs […] Her palfrey plunged forward, And, as it touched the ground, it slid into a water-hole – translation by S. Gregory)

This instance of blundering horse-riding in the twelfth-century Anglo-Norman romance of Tristan and Yseut causes an uncontrollable fit of laughter in Yseut, who, to the horror of her brother Katherdin, jokes about the splashing water touching her in places that Tristran hadn’t tried to reach yet ‘Ceste aigue, que ci esclata, Sor mes cuisses main d’ome ne fist, Ne que Tristran onques me quist’ (ll. 1193-96). The fragment of text breaks off here, and any possible riposte by Tristran, a paragon of chivalry and fin amour, remains unrecorded.

For last July’s word of the month I started to look into the Anglo-Norman terminology of horses and horse-riding. The subject matter turned out to be such a prolific one that I had to restrict my overview to only the very general vocabulary for ‘horse’ (cheval, horse, estalon, stot, ive, jument, poutrel, pulain, hakeney, palefrei, sambuer etc.) and ‘horse-riding (chevalcher); see here. 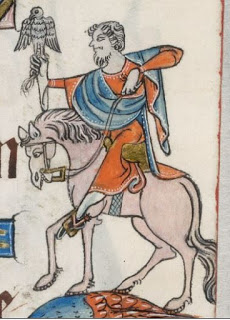 For this month’s blog, I’d like to return to the equine world, and have a look at some of the Anglo-Norman terminology on the subject of horse-riding. And the rather amusing passage cited above brings together a fine group of words relevant for the purpose.

Firstly, there’s the verb chevaucher/chevalcher (line 1142): ‘to ride a horse’. As discussed in the previous blogpost, this is a verbal derivation of the noun cheval, with the -auch/-alch part a reflex of the Latin etymon caballicare (FEW 2,6a). The term (literally ‘to horse’) is omnipresent in Anglo-Norman, as it is in Continental French, but, consistent with the noun cheval, was never borrowed in English (except for some rare late-medieval derivatives chivauchier for ‘horse-rider’, and chevachee for ‘an expedition on horseback’)[1]. The AND currently offers only two synonymous verbs, with chevaler2 (a rare and even more direct verbal derivation of the noun) and guier (a general term for ‘to guide, steer, direct’[2]). 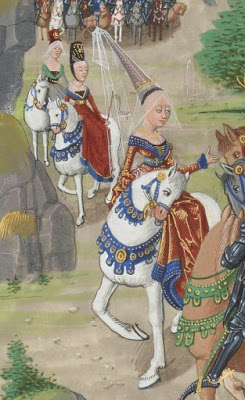 Yseut and her company ride in relaxed conversation, on horses that were probably amblant (‘walking, ambling’ from Latin ambulare[3] – one of the few words discussed in this post that were also used with the same sense in English[4]). Another verb used for the same type of relaxed riding is hobeler2, from an intensive form the Germanic root hobben (‘to bounce’, FEW 16,215a). The word is also attested in Middle English as hobelen (‘to rock’) but, apparently, without the equine sense.

([…] The black charger on which he sits […] He rides, ambling over the plain, towards the city)

For a trotting horse, moving slightly faster (although the verb covers a range of speeds), Anglo-Norman uses the verbs troter (from a Germanic etymon *trotton, ‘to run’[6], appearing in English from the second half of the fourteenth century) and ungler (a word previously discussed on this blog here).

An even faster gait would have been galoper (also from a Germanic root: possibly the compound *wala hlaupan, ‘to jump well’[7]), or coure1 (‘to run’, from Latin currere[8]) les galops. Anglo-Norman has a number of expressions (les grans galops, les menus galops, les petits galops), which must have indicated different types running (including a canter and a trot), but which did not persist in English (where the word gallop itself wasn’t attested before the sixteenth century).

(He advanced at a gallop on his glorious horse) 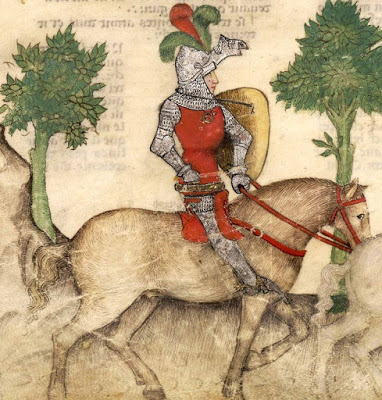 When Yseut loses control of her horse, she pricks it with her spurs, and the phrase used is ferir des esperons (l.1149): literally, ‘to strike’ (ferir1) with ‘spurs’ (esporon)[9]. Anglo-Norman has a generous number of cognate periphrastic expressions for this particular action, using a variety of verbs that must have expressed the different levels of force applied: hurter des esporons (with the verb hurter related to modern English to hurt, but only in its original sense of ‘to strike’);[10] somewhat more softly in tucher des esporons (‘to touch’); but more vigorously again in brocher as esporons (brocher, ‘to prick, prod’); more painfully perhaps with ficher des esporons (ficher, ‘to fix, fasten’, but also ‘to drive in, pierce’), and poindre des esporons (poindre, ‘to prick, sting’); and almost viciously in arguer des esporons (arguer, ‘to oppress, afflict’ and related to Modern English to argue). Once more, almost none of these verbs, even though most of them moved into the English language (‘to hurt’, ‘to touch’, ‘to fix’, archaic ‘to poin’, ‘to argue’)[11], were ever used in the same equine context.[12]

(Ipomedon saw him coming, and spurred his horse straight towards him)

(They lower their swords and spur their spirited horses)

Furthermore, poindre‘s present participle form, poignant, used as an adjective acquired the specific sense of ‘at a gallop’ or ‘hastily’:

(But the Germans then arrived at a gallop) 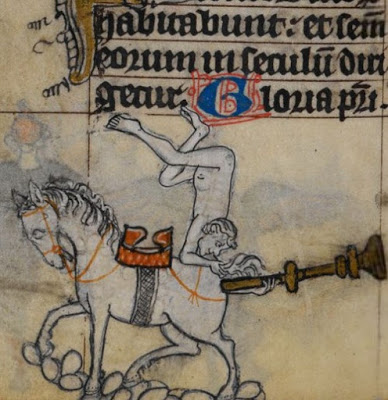 Not surprisingly, the adjective poignant also developed a range of figurative uses in Anglo-Norman (e.g. ‘par dures et poignantes penancez’ Sz Med 107.19)[16], and it is mainly as such that the word gets borrowed in Middle English (MED poinaunt, ‘(of a sauce) piquant’ and ‘of a state of feeling) distressing’; and OED poignant, ‘arousing or expressing deep emotion’, first attested at the end of the fourteenth century in Chaucer’s Canterbury Tales). The horse-related sense is not attested in English.

Lastly, Anglo-Norman also uses the less common verb cuiter (‘to urge, compel’)[17] to refer to the spurring of a horse:

(He has spurred his hunting horse until its sides were bloody)

together with the expression using the cognate noun, a cuite d’esporon (‘with urging by the spurs, spurring hard’, sub cuite):

(The messenger arrives at Hampton at a gallop)

In the case of Yseut, she spurs her palefrei (line 1154, cf. previous WoM) when it is rearing its legs (line 1148, s’arbrer – a verb derived from arbor, ‘tree’, drawing an effective analogy with the branch-like shapes of the horse’s kicking legs).[19] The horse becomes entirely uncontrollable (line 1148, se desreier),[20] and the result is that the animal rushes forwards (line 1154, s’empeindre avant), slips and splashes into a ditch. Yseult takes the involuntary shower of water lightly, but the mareschal or garçun back at the estable may have been less impressed with the state of the horse, eschif and without deboneireté, having to torcher the wet skin with their strile, and taking off the mud-splattered huce, sele, lormerie and panelloun. But the discussion of these words will have to wait for another time.

[1] Earliest attestations for these uncommon words are 1420 and c.1380 respectively.

[4] Cf. OED amble v.: ‘Of a horse, mule, etc.: To move by lifting the two feet on one side together, alternately with the two feet on the other; hence, to move at a smooth or easy pace’, first attested in Chaucer.

[10] The etymology of Anglo-Norman hurter remains unclear, and the FEW’s proposed Frankish origin (*hurt-, FEW 16,271b) was already questioned by the OED in 1899. The DEAF prefers the reconstruction of *urgitare, an intensive form of urgere (‘to push’) as an etymon, but is by no means convinced (hurter, H732).

[11] The verb ferir1 (from Latin ferire, FEW 3,465b), though particularly common in Anglo-Norman, has no equivalent in English.

[12] The only exception is brocher, with its Middle English counterpart brochen also used to refer to the action of spurring horses (as well as, among other things, putting meat on a skewer or tapping a barrel).

[15] The word ‘brandif’ is considered a spelling variant of braidif, defined in the AND as ‘spirited horse’.

[16] The AND entry poindre is currently under revision, together with the rest of the P-entries. The second edition of this part of the AND is planned to be published online towards the end of 2016.

[18] A type of horse, cf. chaceur. The term for ‘hunter’ was used not only with reference to a ‘hunting horse’, but also as a gloss for the Latin word for ‘ambler, trotter’.

[19] FEW 25,89b and DMF arbroyer (‘to plant or decorate with trees’). Anglo-Norman also has the synonyms brandir (‘to brandish’) and once again ferir1 (‘to kick’) for a horse bucking or rearing.