Word of the month: havegooday

While gathering information for the revision of the AND, one of the sources available to the editorial team is the collection of ‘gleanings’ previously made by contributors. Certain texts were read completely and any number of noteworthy words, phrases or citations were set aside – in earlier days handwritten on slips or on typed lists, but more recently copied in digital files – for later consideration. Sometime in the late 1990s Dr. Lisa Jefferson contributed in such a way, and gathered material from (among other sources) the manuscripts of the Merchant Taylor accounts – which otherwise would not have been available to the AND. Her ‘gleanings’ for ‘H’ from these documents belonging the London guild of tailors included the following intriguing phrase:

It is a single entry in a list of payments made during the second year of the reign of Henry VI (1423). 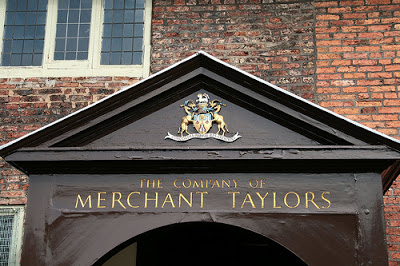 Two seemingly English words appear in this otherwise Anglo-Norman sentence: havegooddays and stretdore. The AND’s editorial policy on matters like this has been that when a given context is Anglo-Norman, isolated English, Latin, Greek, Hebrew (etc.) words should be considered either as loan-words or, at the least, as comprehensible to the Anglo-Norman reader/listener. Either way, ‘foreign’ or ‘mixed language’ words such as these are normally included in the dictionary (obviously, with a relevant language tag indicating the language from which they are borrowed). Consequently, both havegoodday and stretdore will get their own AND entries, just like previously bacgavel, clapholt or debet.

To what is this entry referring? The note is a financial record for the purchase of seven havegooddays, with one for the stretdore being more expensive (4 d.) than the other six (1 d. apiece). Stretdore can be found in the Middle English Dictionary (sub strete n.2) as ‘the door of a house leading to the street’, but what is the meaning of havegoodday? Lisa Jefferson attached a puzzled note to her gleanings: ‘I fear one of those wooden plaque things, bearing words and which are affixed to a certain door’. Did the Worshipful Company of Merchant Taylors in London see the need to greet the visitors to their Hall with no less than seven such signs? Or was this a rather twentieth-century-like attempt to boost the morale of their members on a daily basis?

The solution, as is often the case, can be found in the OED. The Oxford English Dictionary has an entry for havegooday – an obsolete word with only one attestation – which is defined as ‘a kind of door-latch’. In addition, it links to another entry, haggaday which is accounted for as a contracted form of ha’ good day. In nineteenth-century dictionaries and glossaries (cited in the OED) ‘haggaday’ is defined as ‘a kind of wooden latch for a door’ (J.O. Halliwell, A Dictionary of Archaic and Provincial Words), and described as ‘frequently put upon a cottage door, on the inside, without anything projecting outwards by which it may be lifted. A little slit is made in the door, and the latch can only be raised by inserting therein a nail or slip of metal’ (E. Peacock A Glossary of Words Used in the Wapentakes of Manley and Corringham). 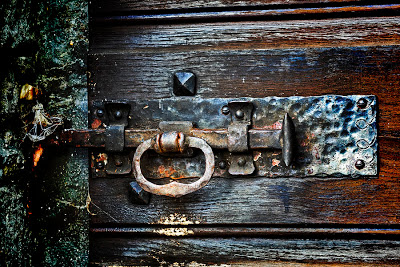 The word hagodai (with its variant have-godai) is also found in the MED, and appears from the middle of the fourteenth century onwards. It is, however, defined somewhat differently as ‘A ring forming the handle for raising the latch on a door’. The word seems to have been fairly common, albeit with quite some variation in its spelling: the earliest attestated form in the MED is hagonday (1353).

Returning to Anglo-Norman, also this syncopated form can be found, i.e. in a second attestation culled by Lisa Jefferson from the Merchant Taylors’ accounts, this time of the year before:

The word is unattested in Continental French or in Medieval Latin. However, these two ‘new’ citations document the existence of havegoodday in Anglo-Norman, and a new entry has been created, which will become live with the next phase of updates (i.e. when the recently finished N- entries are published online). As a preview, here is a screenshot of the editorial version of the new article:

The question remains how a greeting like ‘have a good day’ could have lent its name to (part of) a door-latch. It is the etymology proposed by the OED (not updated since 1898) and the MED, but ultimately remains unexplained. Is it a metonymical link, with the words usual said to someone before closing a door after him/her being applied to the instrument that locks this particular door? Or, similarly, does the safety of the latch guarantee a ‘good day’ to the owner of the house? The fact that the earliest attestation hagonday has an extra ‘n’ raises the possibility that this word may have had an entirely different origin, and that the more recognisable variant, have a good day, may have been the outcome of a folk-etymology, already in use in the Middle Ages. Is hagedaie a more original form than havegoodday? So far we have not been able to find any other etymology for the word – could it be a place-name, another language, a person?