Word of the Month: Gagging, queasy and squeamish

Writing a dictionary is a never-ending process. As editors we are constantly moving forward through the dictionary, revising the original entries and adding new ones, currently for the letters P and Q. However, new research, new editions and new perspectives can cause us to return to earlier, completed entries and rethink them. As last month’s entry showed, the addition of semantic tags prompted some rewriting of entries so that overlapping semantic fields can be made more evident and more easily searched through the tagging system. A similar rewriting process has been inspired by incorporation of links to other dictionaries, which can highlight words that don’t belong to the etymon once believed.

The original entry for gagé (not present in the first print edition, but added in the online second edition, in 2005) defined estre gagé de as ‘to be inclined to refuse to’. This was illustrated by a single citation:

(‘To sweeten the drink, add a bit of sugar or licorice, as many are *gagged* by drinking bitter things’)

No definition for the term is offered by the editor of the text.[1]

While the word appears to be a derivation of gage1 (i.e. ‘pledge’, see FEW *waddi 17,443a), the sense of the word does not resemble any known French verb or adjective of this spelling or derived from this etymon. This posed a problem when we attempted to add links from gagé to the other dictionaries. Where did this word come from?

It did seem to look a lot like the English verb ‘to gag’. Was it possible that this was a Middle English borrowing? The OED sub gag v.1 notes that word is first attested in 1440, with the sense of ‘to strangle, suffocate’ but does not appear to have been used again in that sense. The sense of ‘to stop up the mouth with a gag’ appears in the sixteenth century while the (in this case) the most relevant sense of ‘to choke, to retch’ doesn’t appear until the early eighteenth century.

The MED sub gaggen v. notes two earlier uses of the word in English, in 1269 and 1327, albeit as surnames, with no clear meaning: are Thom Gagge and Robertus Gaggemon ‘stranglers’? However, these instances suggest that the word must have been in use earlier than the OED can attest and thus could have been borrowed from English into Anglo-Norman. It does appear that the term was also borrowed into Medieval Latin – the DMLBS attests to its use in the sense of ‘to force (someone’s) head back’ (sub gaggare 1044b) a single time in the early fourteenth century.

The etymology of the word remains enigmatic. The OED suggests it is onomatopoeic, while the MED points to the Old Irish form gag-háls, ‘with the neck drawn back’.

Interestingly, Anglo-Norman appears to have another word that may come from the same etymon. At the beginning of the fourteenth century, Nicolas Bozon used gageous – a possibly related adjective – twice in his Moralized Tales (Contes moralisés):

(‘if he eats and drinks little, then he is queasy or squeamish’)

(‘and although it (=the badger) is a dirty beast, still it is squeamish – so much so that when the fox, […] defecates in the entryway (=of its burrow), they will never return there’) 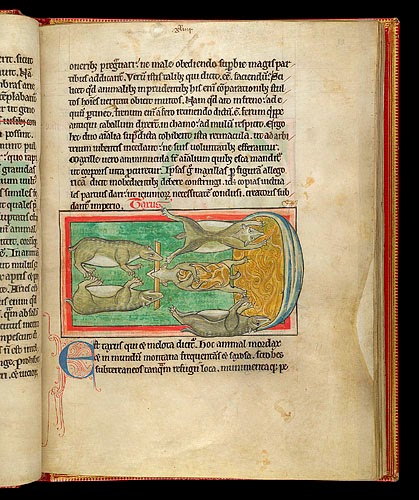 In both cases, the sense of the word seems to be that of ‘queasy, squeamish, physically unable to support swallowing or turned sick.’[3] Interestingly, although queasy is attested in English from about 1450 (MED quaisi(e adj 35516; OED queasy adj.), no related form is found in Anglo-Norman. The etymology of queasy is also uncertain, and may possibly be an Old Norse or Old French derivation.

Semantically, though not formally, gageous is linked to yet another English word of Anglo-Norman derivation, squeamish (OED queamish adj.; squeamish, adj. (adv. and n.) and squeamous adj.; MED queimous adj. and squaimous adj.).

Initially this word seems to be an insular creation, attested only in fourteenth-century Anglo-Norman. As the entry escoimus shows, it is found in Bozon (who is the first to use it, around 1300) and Henry of Lancaster’s Seyntz Medicines as well as two other fourteenth-century texts (Respit, a collection of proverbs and Courtoisie, a manual about fine manners). The entry in T-L (escomos 3,954) and the DMF (escoimous) are illustrated only with these same citations, that is, there are no Continental examples of the use of this word.

Its presence in Bozon’s text, and its use next to the ‘anglonormannified’ version of another Middle English word could be seen as suggestive. Bozon included a number of Middle English phrases and proverbs in his work, especially the Contes, and it appears that the author was competent in both languages. Was he relying on his Middle English vocabulary to introduce these Anglo-Norman words?

Within a year or two of composing his text, we find in the Middle English Handlyng Synne (1303):

(Another vice is yet to be acknowledged, That rich men practice muchly, That many a one are so dangerous, And out of measure squeamish, That their cook may no day, Prepare his meat to please him.) 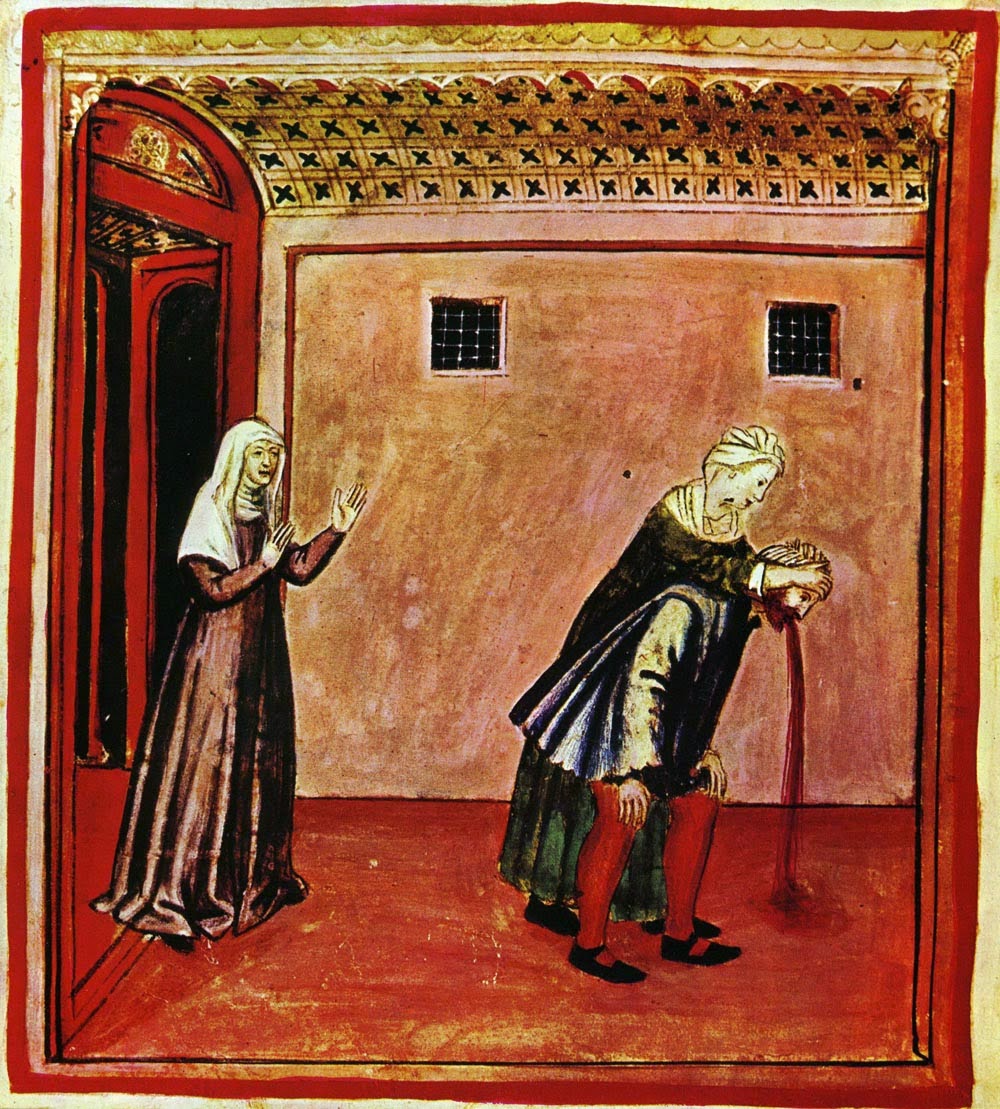 This poor soul in Rome, Biblioteca Casanatense 4182, fol 192, seems out of measure squeamish.

Unfortunately, the (later) Anglo-Norman version of this text doesn’t translate these lines verbatim.

The appearance of the word at nearly identical times makes it difficult to determine precisely how the word entered both languages. The etymology of escoimous remains unclear. There doesn’t appear to be any related words in (Medieval) Latin.[4] The FEW suggests an etymon in the Old Gascon sceamu (‘shame’ 17,22b) and the REW suggests a related etymon in the Old Norse skömm (‘shame’ 8005b) though the semantic development from this word is problematic.

The etymon skömm, gives us in English the word shame n. as well as other derivations. Two medieval derivations look very similar to our escoimous – shamevous adj. ‘shameful, disgraceful’ and shamously adv. ‘shamefully’ (for which the OED suggests an unattested shamous adj.). However neither of these terms are attested before the middle of the fifteenth century.

Another possible source for the word is the one that gave use qualm n.3 which is very similar both formally and semantically (‘a sudden feeling or fit of faintness or sickness’). The etymology for this word is equally uncertain, but appears to be of Germanic origin, with cognates found in Danish and Swedish. However, the word is unattested prior to the early sixteenth century.

In the end, the word remains obscure. Skömm remains the most likely etymon of the word but it is difficult to know if escoimous was an early adjectival derivation in Middle English (e.g. scamous) which was borrowed into Anglo-Norman by Bozon or conversely, if it was a Norse word used in Normandy (though otherwise unattested in Norman) which Bozon then picked up. Or perhaps it was created independently on both sides of the channel.

In the end there is no neat solution to the puzzle (as yet! Suggestions are always welcome!). It does underline some of the complexities of interlinking dictionaries – finding the cognate references is not always straightforward! Luckily, the editors can now add commentaries in entries where they can explain some of the challenges they faced in creating the entry.

[1] Elizabeth Valentine, in An Edition of the Anglo-Norman Content of Five Medical Manuscripts of the Fourteenth and Fifteenth centuries, Ph.D. thesis, University of Exeter, 1990, also edits this text and offers the translation ‘nauseated’.

[3] The DMF attests to one use of the word in Middle French (gageux) but believes that the terms is related to *waddi and defines it as ‘engagé, obligé’. It would equally be possible to define it as ‘sickened’: Plus que vous deux ne suy hardis ne corageux: Se premiers je vouoye, trop serroie oultrageux. Pour tant ne le feray, de ce suy trop gageulx : A men honneur seroye laidement damageulx. (Ysaÿe Triste G., p.1400, 282).

[4] Medieval Latin has the very close squameus (DMLBS 3173c); however, this is defined as ‘covered in scales, scaly’. See English squamous adj.