Word of the month: fitonesse

Prophecies and divinations were very much a part of the medieval spiritual landscape and the Christmas miracle, and the coming of Christ the Messiah, was one of the most important events in Christian theology foretold in several passages of the Old Testament.[1] Prophecy, however, even if considered as the only legitimate channel for predicting the future as decreed by the Church, was not the only means for foretelling things to come. This is reflected in the variety of Anglo-Norman vocabulary we have for describing not only the acts of divination, e.g. devination, geomancie, garmenterie, but the practitioners themselves, such as devineur and nigromancien, using various and often, to the modern eye, dubious methods to predict the future. But whereas the headwords such as prophete, devineur and nigromancien come with a string of related words in the AND, some of which are still in use today in modern English and French[2], albeit in different form, fitonesse stands out as a more unusual term.

Fitonesse is currently defined in the AND as ‘sorceress’ but this definition is to be changed to ‘soothsayer’ to better reflect the content of the single citation used to illustrate the headword:

The citation is from the Mirror of Justices, a curious legal treatise or commentary from the late 13th century. The metaphor of a ‘mirror’ was one of the more popular literary conventions of the late Middle Ages, and it has been argued that the text was designed not as a record of what courts of the time did but of what the author, by reflecting the lawyers’ defaults and defects through his textual mirror, thought they should do.[3] Fitonesse appears in a passage where the author explains the crimes of ‘lese-majesté’ (lese-majesty), i.e. any offence against the king’s authority – including the King of Heaven. According to the author, all manners of divination that are not prophecy are types of heresy and crimes against the celestial king and therefore forbidden. His example, our citation, refers to the Samuel I 28:3-25 where a woman soothsayer from Endor summoned the prophet Samuel’s spirit at the order of king Saul of Israel. In a related section of the Old Testament such practice was specifically forbidden[5], and this is undoubtedly why the author of Mirror of Justices chose to use this particular religious element in his text. 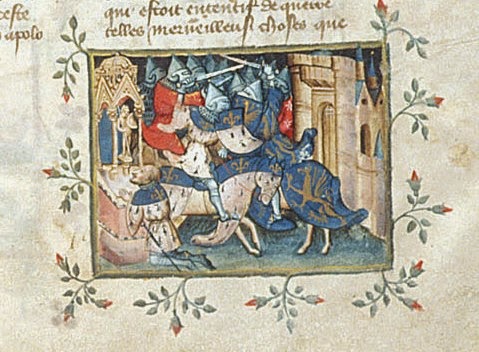 Fitonesse is an Anglo-Norman variant of medieval Latin pythonissa (DMLBS 2593a), a term derived from ‘Pythia’ or ‘Pythian’ referring to the high priestess of Apollo at Delphi. ‘Pythia’ is in turn named for the ‘Python’, the monstrous serpent slain near Delphi by Apollo. According to one form of the legend, the oracle originally belonged to or was possibly guarded by the serpent, and, on the extermination of the latter, became the oracle of Apollo. Therefore, as Corinne J. Saunders have noted, the term ‘python’ is used to indicate a prophetic or divining spirit, which takes possession of a person and it finds its origins in the mythological Python slain by Apollo, and consequent Greek poetic use of ‘python’ to indicate a monstrous antagonist.[6] She continues by noting that diviners and soothsayers consequently became known as ‘pythons’[7], and from this source came the name of medieval female diviners and soothsayers as ‘pythoness’ (OED pythoness, MED phitonesse). In the OED the etymology of Python n. 2 is given as post-classical Latin python-, i.e. ‘familiar or possessing spirit with powers of divination, person possessed by such a spirit (Vulgate) and its etymon Hellenistic Greek πύθων familiar spirit, demon possessing a soothsayer (New Testament)’. Middle English also has a variant spelling fetonisse which, similarly to the Anglo-Norman fitonesse is a metathesized form of phytonisse/phitonesse, i.e. the ‘h’ moved forward to the ‘p’, producing ‘ph’, which then, in turn, became an ‘f”. Other variants of medieval French have the medieval Latin form (Godefroy, DMF pythonisse). 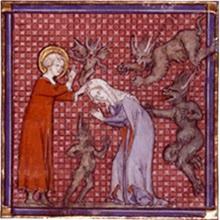 Exorcism of a woman believed to be possessed by demons

The term appears first in Jerome’s translation of the Vulgate Bible to refer to the soothsayer consulted by King Saul. In the Vulgate the woman is referred to as mulier habens pythonum, that is, a woman ‘having the python’ to signify that she is possessed.[8] The element of possession by a spirit or a demon which in turn enables the prediction of future is also present in our citation (se fet par le mal feie) as well as in the OED and DMLBS in addition to the more general definition of ‘female soothsayer, medium, sorceress and/or witch.’ In addition to pythoness, OED has an entry for Pythonissa which refers to the proper name often used for the Old Testament soothsayer. The Middle English phitonesse is also at times capitalized to refer to the particular soothsayer encountered by Saul in the biblical text, especially in Chaucer and Gower. In Gower’s Confessio Amantis we have

‘Samuel out of his kinde, Thurgh that the Phitonesse hath lered, In Samarie was arered Long time after that he was ded’[9]

and in Chaucer’s Friar’s Prologue and Tale:

‘Som tyme we [devils] aryse With dede bodyes..And speke as renably and faire and wel As to the Phitonissa [vr. phitonessa] dide Samuel’[10].

It should be noted that apart from a passage in Chaucer’s House of Fame where phitonesse is linked with other users of magic in the dreamer’s vision:

That use exorsisacions (ll. 1260-1263), the word is primarily used in Biblical context in Anglo-Norman and Middle English. In other forms of medieval French though, the word seems to be more widely used as a more general term for magician/sorcerer or soothsayer, or for the act of predicting the future, than with its Biblical connotation. For example, in Middle French it also signifies the act of divination as well as ‘l’art de phytonisse’, i.e. ‘divinatory art’ (DMF pythonisse, sense B). Similarly, in a later text, Rabelais’ Le Tiers Livre, phitonisse is listed both as a term for female soothsayer in addition to sorciere (‘sorceress’) and Sibylle (‘Sibyl’)[11] as well as in a capitalized form for the Old Testament soothsayer. It seems then that even if in Anglo-Norman and Middle English fitonesse/fetonesse is more a biblical or historical reference rather than a proper substantive, the continental French word pythonisse seems to have been more lexicalized. 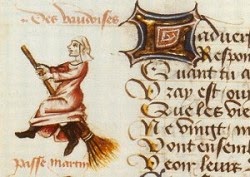 Phitomie is another entry in the AND that is related to fitonesse, and provides an adjectival form that only appears in Anglo-Norman, as far as we know. Once more, the term is found in a Biblical context in a fourteenth-century Anglo-Norman translation of the ‘The Acts of the Apostles’.[12] The citation in AND reads:

The author has translated the original Latin ‘habentem spiritum pythonem’, the accusative case of python, with the elsewhere currently unattested phitomie. This entry is slightly dubious and as it is in the section of ‘P’ that is currently under revision, it may be subject to change. Without any further etymological evidence to explain the ‘m’, it is tempting to see the word as simply a misreading of phitonne or phitoune and possibly a substantive rather than an adjective. In any case, the two entries will also have to be brought together under the same letter of the alphabet, probably (and for etymological reasons) under ‘P’.

[5] ‘There shall not be found among you any one that maketh his son or his daughter to pass through the fire, or that useth divination, or and observer of times, or an enchanter, or a witch, or a charmer, or a consulter with familiar spirits, or a wizard, or a necromancer. For all that do these things are an abomination unto the Lord: and because of these abominations the Lord thy God doth drive them out from before thee’ (Deuteronomy 18:10-12).

[8] See the OED definition for Python n. 2, especially ‘a spirit which takes possession of a person’.