Word of the Month: Decoration

The primary focus of the present AND project involves the editing of those entries beginning with the letters N, O, P and U. In addition to this, the editors have designed and implemented a series of semantic tags, as we have mentioned in some of our previous posts. These tags have been developed to assist users in determining the semantic area in which a definition is applicable. It is envisaged that by early 2017, users of the dictionary will be able to search via the semantic tags, allowing them to extract all words used in a particular area (for example, all plant names, or all words relating to brewing, etc.).

The examination of the semantic tags in use in the dictionary often shows us how important certain texts are to our understanding of a particular semantic field. While AND1 contained a [decor] tag, it was poorly used, originally flagging only 22 Anglo-Norman words. This tag is meant to highlight terms and senses “related to visual embellishment or adornment of objects, persons or places, including decorative motifs and techniques”. These are the types of terms one would expect to find in documents that describe, or list, household or ecclesiastical items, such as inventories, wills, or account books.

One particular source used for the making of the AND are the Bedford Inventories and their incorporation into AND2 has increased the number of entries tagged as [decor] to 163 (and growing!). This book[1] publishes three post-mortem inventories of the goods of John, duke of Bedford, completed in the mid-fifteenth century. These documents provide a record and description of the duke of Bedford’s belongings, as well as the inventory of the goods in his chapel. 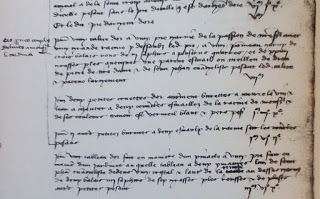 The importance of this type of text cannot be overstated. Currently, the Bedford Inventories are cited 346 times in AND2, illustrating 246 different entries. Of these, at least 20% of the entries or senses are solely illustrated by citations from Bedford, that is, these words or senses appear only in this text and nowhere else. It is also valuable as a witness for the use of Anglo-Norman in the fifteenth century, a period that saw the usage of the language dwindle.

What kind of words do we find solely in the Bedford Inventories and not elsewhere? As can be expected from this type of text, a number of the unique words and senses are ones which are used to describe the decorative items found in the Duke’s household and chapel, giving us an unparalleled view of how a medieval royal household would be furnished and decorated.

The writer of the Inventories frequently uses words that are well attested in Anglo-Norman, but uses them to describe decorative motifs rather than the item themselves. For example, we find the word oiselet, a diminutive used to refer to a small bird, used in the Bedford Inventories to describe a decorative image.

[Item, a large and tall goblet of gilded silver […] with four red banners of small birds coated (?) with silver, with green enamel[2]]

Other types of decoration include the addition of a bocete or boton, ornamental decorations of roundels or buds: 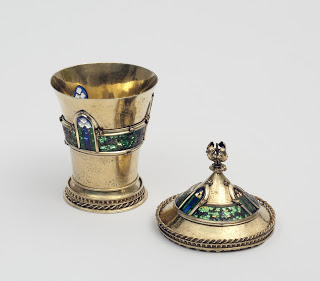 The Merode Cup; France 1400; Image from the Victoria and Albert Museum;
http://collections.vam.ac.uk/item/O93263/the-merode-cup-cup-and-cover-unknown

Other items might be decorated with valuable gems. In one description, small pearls are described as branlant. This likely is a substantival use of the present participle branler, meaning ‘to shake, tremble’, and it is likely that the pearls were suspended from the salt-cellar by gold rings, as is documented in other similar items of the era (though this makes it the sole attestation of the term in Anglo-Norman).

[Item, a golden salt-cellar in the form of a labourer carrying a basket and leaning on a staff, […] and on the staff 29 smaller, round and white hanging pearls.]

Another method of decoration seems to have been the application of a pattern by hammering the reverse side of metal. This embossing was referred to martelé, from the verb marteler, meaning ‘to hammer’.

[Item, a tall, gold cup, in the English fashion, embossed with large leaves]

Several of the words attested in the Bedford Inventories are used in English in the sixteenth century as heraldic terms, however, the appear to have been used in these texts to describe decorative techniques. One such style of decoration is componné, called componé or compony in English. This refers to a decoration consisting of bands of alternating colours, known as compon or coupon, frequently found on a border. This technique is also known as gobony, from the past participle of the Anglo-Norman verb goboner, meaning to cut into strips.

[two copes, fringed with orphrey, with a bordure compony of blue and white with gold fleur-de-lis and an embroidered, crowned ‘K’] 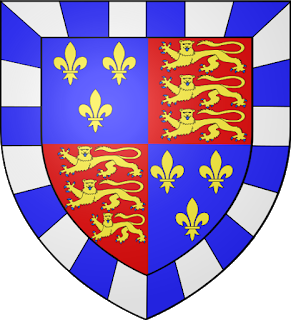 Arms of Beaufort, with a bordure compony argent and azure

Eschequeté, is another word used during this period to describe a decoration formed of a chequered pattern. This term is only attested once, but the variant forms of chequeté, chequeré and eschequeré are more widely attested, describing a similar type of decoration:

We can find one of the variant forms in another text describing what is likely a very fine outfit:

[Item, another tunic and dalmatic (=ecclesiastical vestments) of green satin for a prelate, as above, and decorated with orphrey (=a gold-embroidered fringe) along its length, with the stole and the maniple on a gold background, with several coats of arms] 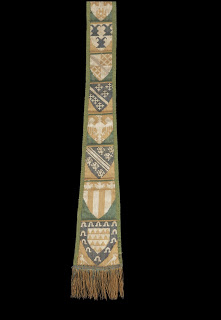 Stole and maniple, linen embroidered with green, white, fawn and blue silks in long-armed cross-stitch with a design of heraldic shields in rectangular compartments with alternative green and fawn grounds. Dates from 1290-1340. Image from the Victoria and Albert Museum.http://collections.vam.ac.uk/item/O130817/stole-and-maniple-unknown

Numerous decorative terms are highlighted in the AND through the addition of our semantic tags, and these will only increase as we continue our revision! These are but a few highlights of decorative terms found only in the Bedford Inventories. This type of documentation is essential to our full understanding of medieval life and the language used to describe it. Bedford is not the sole extant medieval inventory, but many (non-royal examples) of this type of text remain unedited in local archives. How might their identification and transcription change how we perceive the Middle Ages in Britain and the use of Anglo-Norman during this period?

[1] The dictionary relies on the excellent edition found in: The Bedford Inventories: The Worldly Goods of John, Duke of Bedford, Regent of France (1389-1435), ed. J. Stratford, London, 1993. Complete with extensive notes and pictures, it’s a fantastic look inside an interesting text.

[2] Stratford suggests this cup may have been emblazoned with the arms of Sir Thomas Erpingham:”vert an escutcheon within an orle of eight marlets argent” p. 344.