Word of the Month: April showers

From the late 16th century, Brits appear to have hoped that poor weather in the month of April would give way to sunnier days come May, though it’s likely that the sentiment was first expressed much earlier than that.[2] So synonymous is the month of April with rainy weather that one Anglo-Norman author it turned it into a verb, avriller, with the express meaning of ‘to rain, be showery’!

[My April and my violets, My May meadow and my flower […] And my rosebushes when it rains, My flower which does not fear a frost] 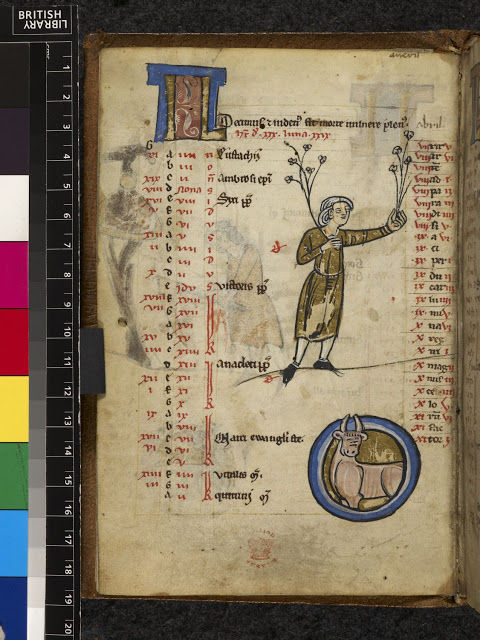 There are no shortage of Anglo-Norman terms to talk about inclement weather, which is perhaps unsurprising in a language used in the British Isles! The weather could be anuius (‘cloudy’), pluius (‘rainy’) or cuitus (‘stormy’; though normally an adjective meaning ‘hasty’). The Latin word for storm, tempestas [3], gave rise to a host of terms in Anglo-Norman to refer to bad weather. One could refer to inclemency as a destemprance (also used in English in the form distemprance) or as an entempauns or merely as a tempeste (which persists in English as tempest and in French as tempête).

(the houses […] knocked over by a wind storm)

So great was the rain that one could simply use the word for river, flueve, to refer to the weather! The most frequently used terms for rain though are those that continue to be found in Modern French: pluie and pleuvoir (pluvoir).

(And the air will be shaken by wind and rain)

Along with the rain, comes the wind! Anglo-Norman had multiple terms for wind, beyond the general term vent. These terms refer to specific types of winds, generally in reference to the direction from whence they came and are frequently adapted from the names of the Latin gods of the wind. Thus the wind called affricum (i.e. from Africa) is one from the south-west, the wind called aquilun is from the north, after the god of the same name. An austre is from the south, derived from the Latin wind god Auster, while a favonyn is from the west. This last wind is derived from the Latin Favonius, which might be more familiar by its Greek name Zephyrus. This wind was believed to bring the spring. (Favonian is also used in English but was borrowed from Latin in the seventeenth century.)

(Then a Favonian/westerly wind came to them from the west) 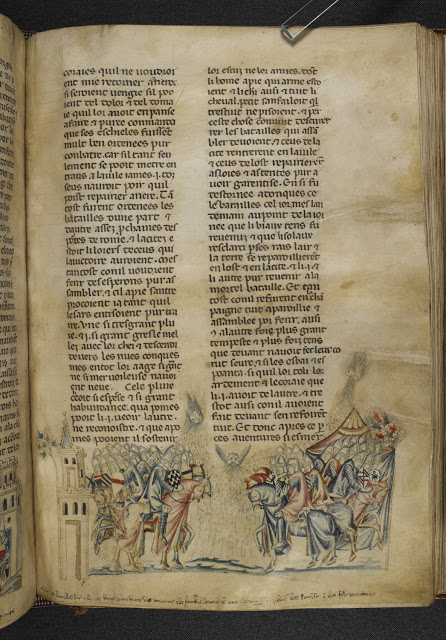 Another wind, which is the subject of a newly created entry in the AND, is called the plovel. Also known as the plougol, it derives from the Latin pluvialis, that is, relating to rain, thus is it the word given to a wind from the south(or west) believed to bring the aforementioned April showers.

After the wind and rain comes a rainbow, known as an arc de ciel or an arc en ciel (see arc 1) (literally a ‘bow of the sky’; Modern French uses arc-en-ciel). The phenomenon was also called iris, after the Latin goddess who personified the rainbow.

(We call iris ‘rainbow’ which we see against the rain; this is why we call the stone iris (a variety of quartz which displays the colours of the rainbow)) 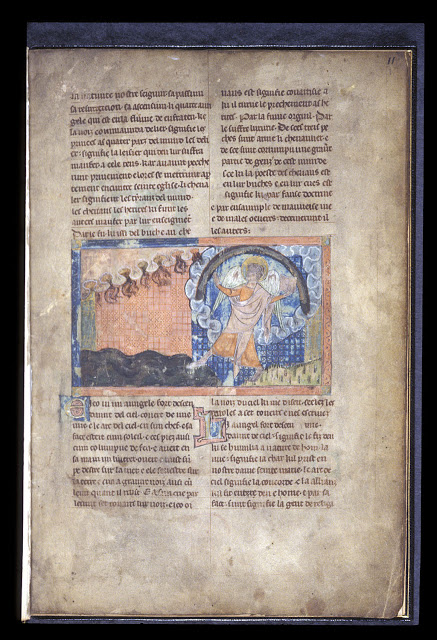 Hopefully as we get closer to May we will see the weather begin to enbelir, that is, to become more beautiful and give way to clerseie (‘clear weather’). Perhaps then we will see the ground asolailer (‘to dry in the sun’) and enflurir (‘to bring forth flowers’) and reflurir (‘to flourish anew’). Hopefully this spring will also bring the editors, working on the revision of P, their first attestation of the word printemps, that is, ‘Spring’, as this form is currently absent from the dictionary![4]

[2] Chaucer began The Canterbury Tales invoking the showery weather of April, ‘When that Aprill with his shoures soote…’. The Riverside Chaucer traces the origins of this topos in Romance literature and parallels in other works (Third Edition (1988), p. 799).

[3] We will continue to give page reference for DMLBS headwords in the AND, the dictionary is now available via www.logeion.uchicago.edu where is is possible to search by headword.

[4] Printens is attested from 1164 in Old French [DEAF prim (printens)] but no Anglo-Norman citation using the word has been found. However, as it is attested in Middle English, under the form prime-temps from 1425, it would suggest that the term was likely in use in England. There was another way to refer to Spring in Anglo-Norman using the term ver. This term will be familiar to speakers of Italian and Spanish, where primavera is used to denote the season.