Word of the Month: Anglo-Norman Sweetmeats

At this time of year, our thoughts turn to Christmas foods – particularly to sweets and confections. A search of the use of the term ‘sweetmeat’ in the AND2 (one can search the translations or glosses in the dictionary from the homepage) shows that an international array of sugary goods was available in medieval England. For those unfamiliar with the English term, sweetmeat is used to describe any kind of confectionary – candied fruit, nuts etc. – nothing ‘meaty’ involved despite the name – ‘meat’ is used here in the original sense of ‘food’ and not ‘flesh’. This should not be confused with the similar sounding sweetbread – which is definitely neither sweet nor bread! Even the OED can’t explain that one!

Confection was the general term used in Anglo-Norman for any compound preparation – a mixture which included a number of ingredients. It was also used as a term for preserves, a mixture of fruit and sugar. From the Latin confectio, the word is attested in Middle English from the end of the fourteenth century (MED confeccioun; OED confection). While Godefroy (confection 2, 231a) suggests a gloss of ‘confiture’ for some 16th-century attestations of the word, other Medieval French dictionaries suggest the term was used for mixtures, particularly pharmacological mixtures to which honey or syrup had been added (FEW confection 2/ii,1029b; TL confeccïon; DMF confection; TLF confection). In the AND2, the citations illustrating this sense of ‘preserve, sweetmeat’ are all taken from late sources: two citation from the account rolls of the Abbey of Durham dating from about 1383 – 1403(and in a Latin context) and a citation from the Southampton Port Books from the early fifteenth century. You will note that Durham and Port Books are frequently our only source for this type of word. While the Port Books record all the imports into Southampton between 1427 and 1430, the Durham accounts record all the expenditures of the abbey between the thirteenth and fifteenth centuries.

Related to confection, confit is derived from the past participle of the Latin conficere and listed in the AND as a past participle used as adjective sub confire2 meaning ‘preserved’. Again the attestations for its usage are mainly drawn from Durham and Port Books with the earliest attestation listed dating to about 1370. The term comfit (the -mf- spelling particular to English, and also found in the Anglo-Norman variants comfeth and comfyt) is attested in Middle English from 1425 in the sense of ‘sweetmeat made of fruit preserved with sugar’ (MED confit, n.; OED comfit, n). The term is equally attested in Old French as confit (FEW conficere 2/ii,1021b; Gdf 2,234b; TL confit; DMF confit (note that this article erroneously linls to AND2’s conflict rather than confire2) ) and also confite (Gdf 2,234b; DMF confite) with some hesitation about the gender of the word.

Dragee is defined in the AND2 as a ‘spice, sweet meat, though also a type of pill, or a sweet medicinal preparation’. The earliest citation of dragee in the OED is from 1853, though in the forms found under dredge, n.2 the word is attested from 1350, glossed as ‘a sweetmeat or comfit containing a seed or grain of spice’. (See also MED dragge n.2). The OED suggests a derivation from the Greek τραγήματα meaning ‘spices, condiments’ which became tragema in Medieval Latin (the DMLBS defines this as ‘fruit and nuts eaten as dessert’ with one attestation: tagimata sunt frustus dulces habentest dures nucleos, ut uve vel nuces’ Alphita 182).

The term is also attested in Old French(FEW tragema 13/ii 158; TL dragiee; DMF dragie1; dragée; GDF dragie1 2,766a (where both attestations are for the locution male dragie, ‘mauvais accord’); GdfC dragie 9,413c; TLF dragée1. The word continues to be used in both French and English, though the modern definition of the term is that of ‘a nut with a candied (sugarpaned) coating’. This type of candy is often given at weddings in North America (known as Jordan almonds), or after a birth in most of Flanders (known in Dutch as suikerboon (‘sugar bean’ and also popularly known as ‘baby poo’) .The term is also currently used in English to describe small metallic balls used in cake or cookie decoration. 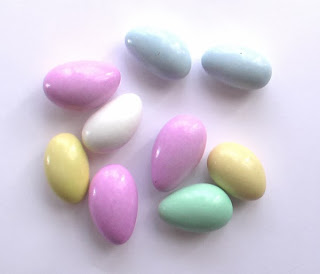 The word gobet is normally used in Anglo-Norman as well as in Middle English and Old French to mean ‘a mouthful’ (FEW *gobbo 4,179b; TL gobet1; Gdf gobet2 4,298b; DEAF gobe G921; DMF gobet; TLF gobet; OED gobbet n.) However, in this entry, we can also find the locution gobet real, defined as a ‘kind of sweetmeat’ and illustrated by two citations:

This usage is unattested elsewhere except in the MED where the use of gobet real is noted with the gloss ‘royal tidbit, a delicacy made of spices and sugar’.

The word madrian, glossed simply as ‘a sweetmeat’ is only found in one attestation in a Latin context (again from Durham – those monks enjoyed their sweets!):

In the entry sukade in the AND2 we find the following citation, glosses as ‘succade, sweetmeat’:

This attestation dating from about 1430, appears to be the earliest attestation of the word, though the FEW (sukkar 19,162a) notes the use of sucrades in the 15th century and the DMF has an attestation from the end of the 15th century of the form chucade in the entry for succade. Godefroy also lists several citations using the word, but these are all later in date than our Anglo-Norman citation (Gdf succade 7,586a). The DMBLS suggests an Anglo-Norman source for their sole attestation of succada which dates to 1570. The term entered English in the forms succade n., succate n.. and sucket n., all with the definition of ‘fruit preserved in sugar’, with the earliest citation from 1463 but the etymology of the word remains unclear. The OED notes the presence of sukade in Dutch and the form succatum in a 15th-century Latin text, but nothing earlier than our Anglo-Norman attestation. However, our graduate student, Megan Tiddeman, has recently noted the presence of a similar form in an Italian (Tuscan) document, dating from the 14th century, so it is very possible that the word is in fact an Italian borrowing. Megan is going to give us some more insights on the development of this word and other words related to sugar in Italian and Anglo-Norman in a future Word of the Month.

Merry/Happy Christmas from the AND – have a wonderful holiday and don’t indulge in too many sweets!