Word of the Month: Anglo-Norman chess terminology (and how to find it)

As an online resource, the AND is constantly evolving. Not only are we in the process of producing a much-expanded new edition of the dictionary itself ( headwords starting with P/Q are our current focus), we also continue to expand the already revised A-O section, adding citations, senses and even entries whenever we come across new material. A word you looked up and couldn’t find yesterday might be in there today!

In addition to this work, we have been designing new features and search facilities for the site. For example, over the last year and a half, we have been providing each and every AND entry with cross-references to other relevant dictionaries of French, English and Latin (so far this is available for entries beginning with G-O – that is about 7500 entries).[1] At the same time, we are also developing a new and searchable semantic tagging system. What this is and how it would serve the user, this blog-post will briefly explain and illustrate.

The so-called ‘semantic tag’ has always been a (minor) feature of the dictionary and appears in the English definitions: plant-names, for example, have been preceded by ‘(bot.)’ and bird-names by ‘(orn.)’ – merely to indicate that, for example, dove was an ornithological term whereas dove’s foot belonged to the realm of botany (sub colum). 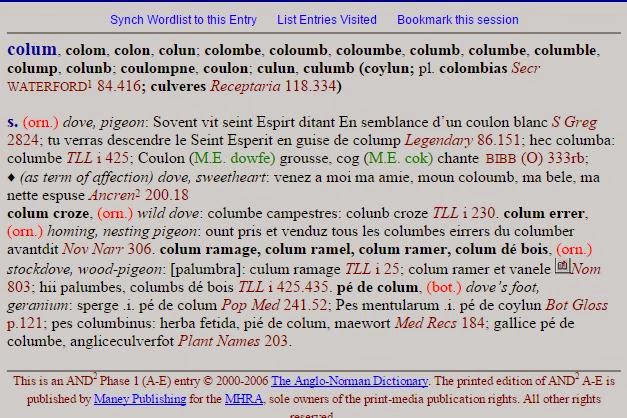 Example of an AND entry with current semantic tags (in red).

The current project will considerably expand the scope of these ‘semantic tags’, improve their reliability, and (ultimately) make them searchable.

By providing such a search facility, it will become possible for any user to bring together sub-groups of Anglo-Norman vocabulary used in a particular field of medieval society, such as shipping, heraldry, law, music, games, or medicine (to name but a few), which we intend to expand with clothing, minerals, kinship, horse-riding, alchemy, weaponry, emotions, and several more. Scholars of medieval clothing terms or legal terminology will have their relevant source material made available with one simple search.

To give just one provisional example of what sort of data we could possibly gather through such a search, we did an ad hoc search of the underlying data for ‘chess’ – a ‘semantic tag’ which has already been used fairly consistently in the AND. We found that the tag is present in 73 entries on the AND (A-Z). 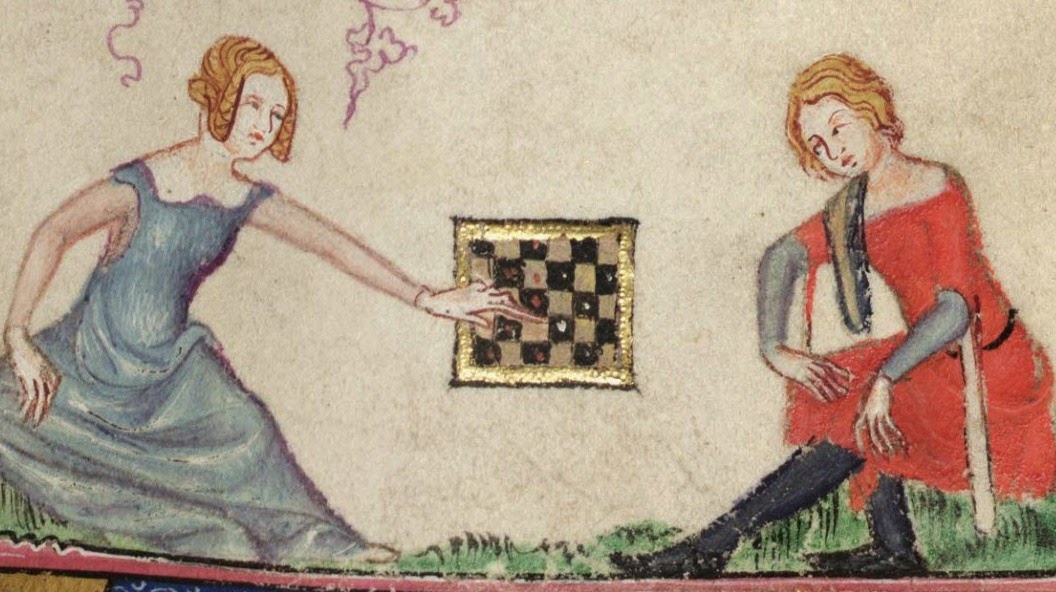 The game of chess has its origins in India and was originally introduced to the Western world by the Arabs as Shat-ranj (from Sanskrit chaturanga: ‘four members [of an army]’). The Anglo-Norman word for ‘chess’, eschec (cf. modern French échec(s) ) derives from the late Latin word for chess scacca[2]. In English the word produced both ‘checkers’ and ‘chess’ – two different games employing a similar sort of board.[3]

On the board, the squares are called places or points (except the corner-square, which is called an angle), and the rows or lines are railles.

Although they did not always move in ways we are familiar with nowadays, the names of pieces are more or less what we expect them to be: for king we find rei, queen is reine, knight is chevaler , roc rook, and peon is pawn (also the word for walker or someone on foot). 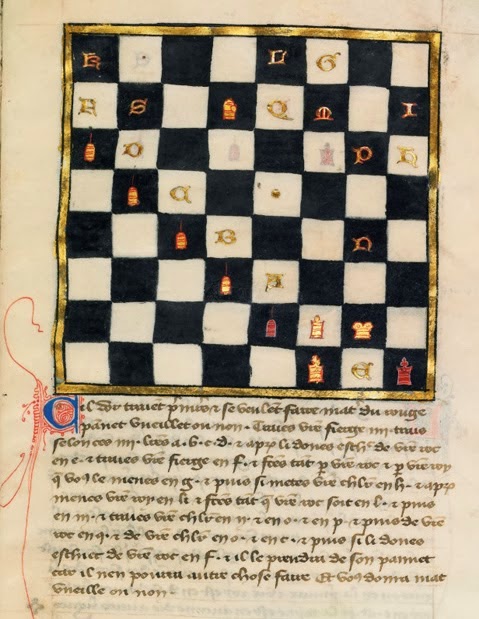 A pawn is also referred to (only in Anglo-Norman) as pet (which must be related to pé in the sense of foot, rather than the other entry pet – which means ‘fart’) and curliu (‘herald, messenger’). The latter use is considered problematic in the dictionary.[4] The pawns were considered masle (‘male’) or femele (‘female’).[5] Presumably this attribution of gender must have distinguished pawns that move on the same colour as the king from those that move on the colour of the queen, but further research on these senses is still needed.

In medieval chess, the queen was also called ferce (from the Persian word ferzen or Arabic firzan/ferz , meaning ‘wise man’ or ‘counsellor’) and functioned as a piece that was only able to move one step diagonally.[6] The Anglo-Norman examples show that the term was also used to refer to a pawn that reached the eighth square and was consequently promoted to a queen. Finally, the bishop is still known as alfin, from al-fil the Arabic word for ‘elephant’ – a piece that was able to move two squares diagonally and jump over other pieces.[7] It is also called cornu (‘horned’ or ‘the horned one’), possibly indicating the elephant’s tusks.[8] 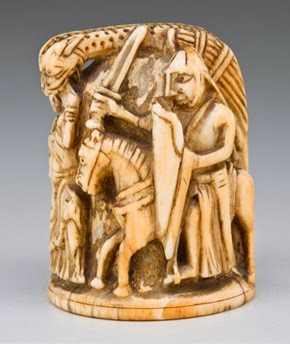 The verbs used for playing the game are semover (‘to move’) or (se) muer (normally ‘to change’, but in some instances also ‘to move’). Pieces that move up the board are said to be munter (‘to climb, ascend’), and if they are trying to take another piece chacer (‘to chase’), mener (‘to lead’) or enangler (‘to corner’). Embracer (‘to embrace’) is used when one piece covers or protects another one. Taking a piece is haper (‘to grab’) or gainer (‘to gain’) – and hence the expression qui done, gaine was used to describe a strategy which involved sacrificing one of one’s own pieces in order to take one of the opponent’s. When the king was descovert (‘uncovered’) possibly by lack of an effective defense, defension or garde, it was said to be in meschief (‘trouble, difficulty’). Subsequently, placing him in check is faire or dire eschec or, when checkmate, mat, eschec mat or eschec plener (‘full check’). In the later case, also mater (‘to checkmate’) was used or even juger (‘to pronounce judgement’). The result was a matement, matesun or (in analogy with the aforementioned verb) jugement. For a game ending in a stalemate (which, in medieval chess was not a draw, but resulted in a win for the player delivering the stalemate), the verb used was estaler. 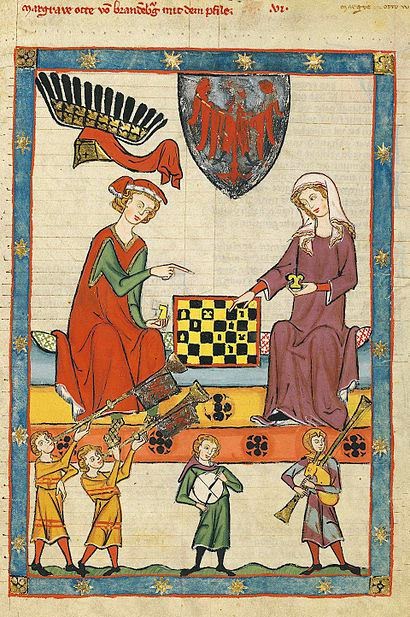 Two thirteenth-century Anglo-Norman treatises on chess have been preserved,[9] whose main concern is the explanation of jupartis: prescribed chess moves and strategies. Juparti became the English word jeopardy (‘peril, danger’)[10] but was originally a chess term (also in English until the fifteenth century) and stands for ju parti: a ‘divided game’ or a game which is as yet undecided.

This is nothing but a cursory overview of all of the material that is currently labelled ‘chess’ in the AND. Although it already gives an idea of the range of terminology, it is also incomplete (I already mentioned the specific use of femele for pawns, and there are no words at present for, for example, ‘to lose’, ‘position’, ‘opening’, ‘to jump over’, or even the board itself). Therefore, before we can open this search-facility to the public, further work needs to be done (and is currently being done) to improve the robustness of our ‘semantic tag’ system. 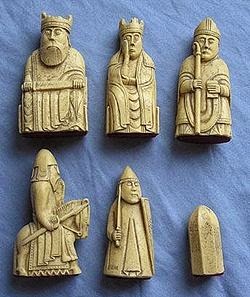 The Lewis Chessmen, twelfth-century set of chess pieces,
from Scandinavia, but found on the Isle of Lewis

[2] See scacca DMLBS 2948a, where the etymology is explained as originating from shah, the Arabic word for ‘king’.

[3] See MED ches n. and OED (only from the early eighteenth-century) checker n.2.

[4] The definition is based upon the context, and no other instances of it have been found elsewhere: ‘Encontre reison eust mespris Que ad curlus reine eust assis’ (He’d have acted against reason if he had placed the queen by the pawn) Eschez ANTS 24.110.

[5] This sense is currently missing from the AND entry for femele, but the citation under masle provides a usable attestation of this. This just as an example not only of how the current semantic tagging is not yet consistent and therefore somewhat unreliable, but also of how a closer look at semantic subgroups may help editors of the AND to identify gaps or omissions.

[6] See also OED fers n. and MED fers n. It is only in the fifteenth century that the queen gets her modern moves.

[7] See also MED aufin n. The piece was referred to as bishop from the twelfth-century in Courier Chess, but according to the OED, this sense appears only from the sixteenth century onwards in England.