Last month, we discussed the presence of loanwords from Irish in Anglo-Norman, and this month, we would like to look further into the linguistic contact between Anglo-Norman and Celtic languages – this time focusing on Welsh. While there has been considerable research into the influence of (Anglo-)French on the Welsh language, particularly in the literary sphere, linguistic contact between the two languages in the administrative and judicial spheres remains relatively poorly studied[1].

Among the materials and sources used for the compilation of the AND we find two editions that bring together documents written in Wales by Welshmen: the Calendar of Ancient Correspondence Concerning Wales, and the Calendar of Ancient Petitions Relating to Wales. The former contains mainly records of correspondence between the English royal court and nobles in Wales, while the latter provides evidence of petitions from individuals throughout Wales to the English king. There are limitations to using these two works – they are primarily calendars, intended to discuss the contents of the document, and often do not include the text. Although hardly indicative of there ever being widespread levels of comprehension of Anglo-Norman in Wales, this documentation does suggest the presence of scribes, notaries or other public servants, in all parts of Wales, with a high level of linguistic competence in Welsh, Anglo-Norman and Latin. 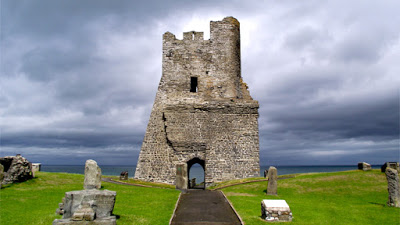 Trotter’s examination of the above mentioned texts, supplemented with his own transcriptions of a limited number of documents in Welsh archives, unearthed twenty Welsh words used in Anglo-Norman context. Of these, nine are currently included as entries in the AND: amobres, commot, frith 3, havoterie, hildenraeth, keveretz, kymorthas, merchet 1 and obeduz. As with Irish, all of the loanwords occur in administrative documentation, and for Welsh, a great number of the terms refer to legal concepts.[2] There is currently no evidence of Welsh words being used in Anglo-Norman literary texts, though it is known that a number of Anglo-Norman works were composed or copied in Wales.

Some of the borrowing of Welsh legal terms seems to be driven by the need to refer to Welsh law – one document refers explicitly to the law of Howel the Good, and in the entry for keveretz we find:

[‘after the conquest of Wales, he granted them their laws and their usages as they had [before] the conquest […] the cyfraith Hywel which they and their ancestors had and used’]

The word keveretz is intriguing, as it renders the Welsh cyfraith, ‘law, legislation’[3], but clearly reformulates it, not only adjusting the spelling, but even producing an Anglo-Norman plural.

The documents also refer to amobres, a term for ‘marriage fee’ from the Welsh amobrand obeduz (from Welsh ebediw) referring to ‘the rendering of a live beast to a lord at the death of a tenant’. A commot was a territorial and administrative division in Wales (Welsh cwmwd) and is attested in three different source texts in Anglo-Norman. The word was, from the end of the 12th century, present in Latin under the form commotus (DMLBS 397a) and from the 13th century, also present in English (see OED commot, n 37273) so it seems likely that the Anglo-Norman word is not a direct borrowing from Welsh. 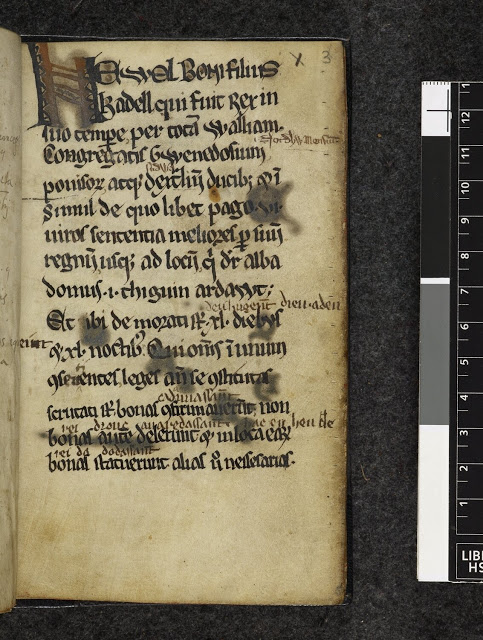 Other Welsh words refer to the specific types of taxes owed by the local population: hildenraeth,[4] that is, a tax paid in oats, is likely derived from the Welsh hildaf ‘to produce (a certain amount of crop)’ and treth meaning ‘tax’ while kymorthas, from the Welsh cymorth, refers to a tribute of cattle owed to a lord, though the sole use of it in the Anglo-Norman citation below is ambiguous:

[‘Item, that no wastrels and rhymers, minstrels or vagabonds, be sustained in Wales to receive tribute or money from the common people, who, by their divinations, lies and incitations are the root cause of the insurrection and rebellion that is currently in Wales’]

Legal terms are not the only type of borrowing from Welsh – a number of agricultural terms used by the local populations are also found in these texts. Frith is the equivalent of the Welsh ffridd, meaning ‘mountain pasture’, though the term ultimately derives from Old English (see OED frith,n.2). Havoterie ‘summer meadow’ derives from the Welsh hafod or ‘summer residence’ or ‘upland farm’.

Welsh borrowings slated to be added to the AND in the course of its present revision to the Second Edition, include the terms raglot, raglour and ragelotie. These all refer to the Welsh rhaglaw, that is, ‘vicegerent, viceroy, deputy’. The term raglot is equally attested in Latin from 1304 (DMBLS 2650a raglotus ‘ragler, chief officer of commot’ ) while raglour was equally used in Middle English, though the earliest citation of the word in the MED and OED is in an Anglo-Norman text (MED raglore n.; OED raglour n. 157484). The DMLBS (2649c) attests to the use of the form raglarius ‘ragler, chief officer of commot’ from 1485. Raglotia ‘office of ragler, raglership’ is attested from 1314 while raglaria is attested from 1334. It seems likely that these terms have entered Anglo-Norman through Latin.

[1] We are indebted to the work done by Prof. David Trotter on the topic, particularly the article ‘L’anglo-français au Pays de Galles: une enquête préliminaire’, Revue de Linguistique romane, 58 (1994), 461-88. Trotter provides a summary of studies on the (Anglo-)French influence on Welsh on p. 462, note 2 of his article.

[2] That’s not to suggest that the writing of Anglo-Norman by Welsh individuals was restricted to the production of administrative material. As Trotter notes (p.461), Hue de Roteland, who wrote Ipomedon [Ipom BFR] and Protheslaus [Proth ants] was from Rhuddlan (Dyfed) and a Simon of Carmarthen composed Le Chemin de Penitence [Penit].

[4] It should be noted that this spelling has been rejected by the AND. The term should read hildevraeth.