WoM: Kerne and the Celtic languages

Over the last few months, our blog posts have focused on loan words in Anglo-Norman – from Greek, from Italian, from Mongolian … This month and the next, we are going to have a look at some Anglo-Norman words borrowed from Celtic languages.

Medieval Britain was a multilingual environment, and it is clear that there was a high level of contact between Anglo-Norman, Middle English and Medieval Latin, resulting in a high level of loan words between the languages. But these were not the only languages used at this period in the Anglo-Norman regnum, which also included Ireland, Wales and Scotland. It is perhaps surprising then that relatively few words in the AND are tagged as deriving from either Welsh or Irish and no borrowings seem to have come from Scots Gaelic. This is a phenomenon that bears a closer look, suggestive of a very different contact situation in the Celtic countries than in England. Can the pattern and frequency of borrowings offer insights into the use of Anglo-Norman in Ireland, Wales and Scotland as well as offer clues about the level of contact between speakers of Anglo-Norman and the local languages? There appears to have been little work done on this perspective, to our knowledge, though we would be very happy to hear of work done on this topic![1]

There are a number of Anglo-Norman texts which were composed in Ireland – these are sometimes referred to as Hiberno-Norman works. These include La Geste des Engleis en Yrlande (Dermot2), composed around 1225, as well as numerous administrative texts extant from the period of Anglo-Norman rule, which can be found in our List of Texts under the following sigla: Affairs of Ireland, Chart St Mary’s, Ireland, Irish Docs, Stats and Ords Ireland and Windsor. Despite the relatively large number of works produced in the area, there are currently only six words in the AND tagged as Irish: betagh, cro, jacoine, kerne, kernemen and grawe. 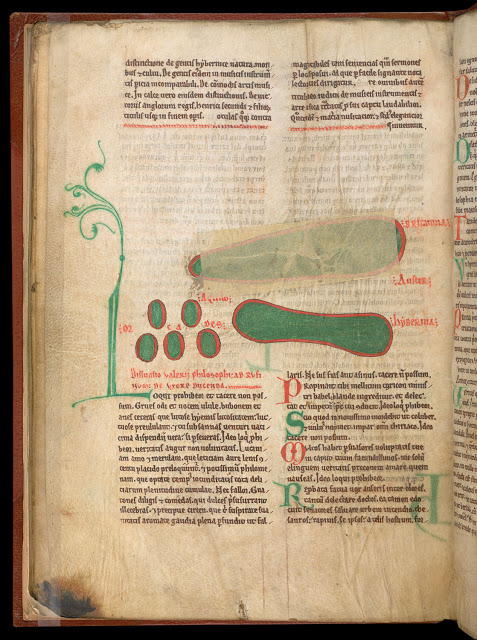 Betagh, may be from the Irish bétach, an adjective meaning ‘doughty, valorous’ but also ‘violent, wanton’, used substantively in the AND. It occurs once in a document from Waterford, written around 1300:

The editor of Bor Cust glosses the term as ‘Irish villein’ though it doesn’t seem that the term had much currency in Irish.

Jascoine refers to the mythological fish encountered by Saint Brendan on his journey. The name of this fish, iasconius, may derive from the Irish íasc . The DMBLS suggests this possible etymology for the term as it appears in the Navigatio S. Brendani. The Anglo-Norman term no doubt derives from the Latin and not directly from the Irish term.

Grawe seems to refer to a type of cup or goblet, though the etymon remains unclear. It has been cautiously identified as Irish, due to the context, but may in fact be something else:

Kerne and kernemen, from the Irish ceithern, refer to a type of lightly-armed Irish foot soldier. These terms seem to have been more widely used than the previous ones, and we find them used in a number of Irish administrative documents as well as in a letter written by Richard II from Waterford.

[‘there where .clxij. of their armed men and armed Irish foot-soldiers were killed’]

Kerne is known in Middle English as well (MED kerne n. and OED kern n.1) so it is possible that the word entered Anglo-Norman though English rather than Irish. The earliest citation of the word is in a Latin text of 1297, which the use of it in Anglo-Norman is attested from 1316. The earliest use in an English document dates from 1423. The compound kernemen certainly suggests an English influence, though this compound does not seem to have been recorded in English.

Cro is a legal term, defined as ‘fine for homicide’ and appears in Irish as cro. It appears in a single, perplexing citation:

The citation, using Latin as the matrix language, but with the Anglo-Norman definite article to introduce the three terms from the other vernaculars, provides three synonyms for the same concept of ‘wergild’. Firstly, cro from Irish; secondly, galnys, the Welsh galanas, an equivalent concept; and, thirdly, enach.

The last term could be from the Irish enech (found in the expression lóg n-enech ‘honour-price’) but also possibly a Scots Gaelic term, as it is found in a document from the Acts of the Parliament of Scotland and most likely a synonym for the other two terms. This is the only term identified as Scots Gaelic in the AND.

Ultimately, there are few identified borrowings from Irish into Anglo-Norman. This may suggest a must have been lower level of contact between the two languages than between Middle English and Anglo-Norman. However, it may also be the case that documents from these areas are must less studied, and that further investigations into the archival holdings in contacts zones in Ireland, may yield further evidence of language contact. We’ll compare these results with Welsh in the next post.