The alpha, but not quite yet the omega, of Greek lexis in Anglo-Norman.

As primarily a Romance language, Anglo-Norman more often than not traces the origins of its lexis back to Latin. As such, determiner comes from determinare, leun2 from leo and oreison from oratio – three entirely random but straightforward examples of how this type of development is so integral to the formation of a romance language that the AND will not highlight these words as Latin in origin. Evidently, Latin did not have exclusive rights to the formation of Anglo-Norman vocabulary – as our blogposts of the last few months have already testified, with examples from Mongolian (or not), Persian and Italian. Indeed, Anglo-Norman in its very nature is, to some extent, defined by an influx of Germanic, and specifically Anglo-Saxon/English, elements. For this month’s post we will take a look at the role of the second Classical language that contributed so much to the pan-European vocabulary: Greek. And what was its effect on the lexis of Anglo-Norman?

Medieval or Byzantine Greek, a term used for the language as it was used between approximately the sixth and mid-fifteenth century, was a mixture of the original Classical Greek and subsequent Koine Greek (the form of Greek which developed as the common Hellenistic and international dialect, and which was used, for example, in the Septuagint translation of the Bible and in the New Testament). 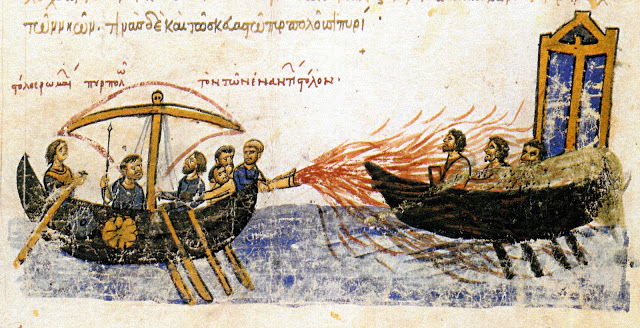 As before, using the ‘language tags’ that appear in the Anglo-Norman Dictionary entries, it now takes little or no effort to retrieve those words already considered to be of Greek origin. But with only 17 entries of the entire AND thus revealing themselves as ‘Greek’, the results seem at first look somewhat disappointing. Let us first take a look at those 17 entries and the contexts in which these loanwords appear.

Most of these words (7) are attested in medicinal texts: leucos, the Greek for white (λευκός), turns up in an explanation of leucoflemancie, a type of dropsy (λευκοφλεγματία):

(‘and so it is called ‘leuciflemancia’ because it consists of white phlegm; ‘leucos’ and white are one and the same thing’)

Similarly we have the words melangiron for ‘black jaundice’ (related to μελάγχιμος in the sense of ‘black, dark’) and inopos (from οἰνωπός, ‘red as wine’) to refer to a certain type of reddish urine. All of these appear mid-thirteenth-century translation of Johannes Platearius’s Practica Brevis – a Latin text but including Greek elements. The term kili vena occurs several times in that same text with reference to the main vein carrying blood from the lower body into the heart. The first element in this Latinized collocation derives from κοῖλος – the Greek word for ‘hollow’. In the Anglo-Norman Euperiston (an early-fourteenth-century text believed to have been translated from Latin as well) a discussion of anorexia explains orexis as meaning ‘appetite’:

(‘fastidium’ is called ‘anorexia’ by Galienus; this is formed by ‘a’, that is ‘without’, and ‘orexis’, that is ‘appetite’, and thus ‘without appetite’)

Finally, at least two separate collections of Anglo-Norman medicinal recipes use to term ana with the meaning of ‘in the same amount’ (Greek ἀνά, cf. DMLBS ana1):

(‘take cold herbs, such as houseleek and stonecrop, in equal quantity’)

It is apparent that in these cases, Greek terminology is retained from an original source text, and more often than not the word remains a ‘foreign’ borrowing in Anglo-Norman, with an explicit awareness of its Greek nature and origin. 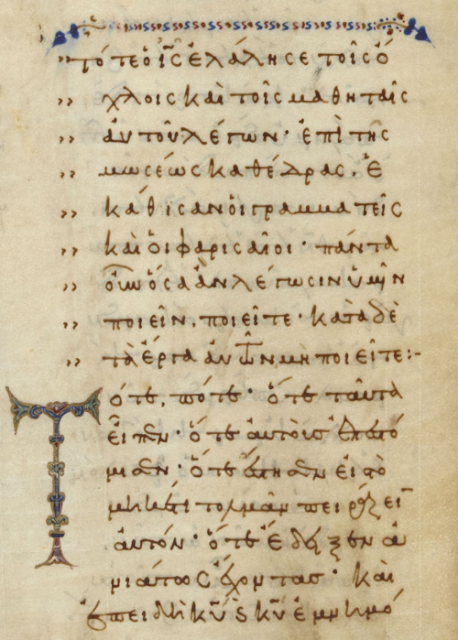 The same can be said for Anglo-Norman words that derive from Greek mythology or history. The AND currently includes catoplepa (a Latinized from (as used in Pliny) of Greek κατω-βλέπων, literally ‘down-looker’) which refers to an African animal, usually identified as either a buffalo or an antelope; lethes (Λήθη, one of the five rivers of Hades whose waters induce forgetfulness) meaning ‘amnesia’; Melos (Μήλος, a Greek island north of Crete); and omega (Ωμέγα, the last letter of the Greek alphabet). The Anglo-Norman translation of Vegetius’ De re militari mentions the use of a monoxille, a type of boat made from a single piece of wood (μονόξυλος), by the Roman military.

The AND also picked up Greek terminology from botany and philosophy, but again the results are surprisingly meagre. Firstly, yperichon is the Greek name for St John’s wort (ὑπερικόν) and appears as an ingredient in thirteenth- and fourteenth-century medical or dietary treatises in Anglo-Norman.[1] Secondly, yle, from Greek ὕλη (‘wood, timber, material’ but since Aristotle used to refer to ‘matter’; modern English hyle), is discussed and defined in the early thirteenth-century text, La Petite Philosophie:

In a religious context, the Anglo-Norman version of Jerome’s Letter to Paulinus retains the term ogdoad (‘a group of eight divine beings’) with references to Egyptian deities, which derives from Greek ὀγδοάς (‘eight’).

One final word currently tagged as Greek in the AND is diadocupo, apparently a type of oven, which appears in a fourteenth-century Anglo-Norman collection of alchemical material and which, aside from its Greek-looking form, has not yet been identified by the editor of the text or the AND editorial team.

Clearly, the influence of Greek cannot have been as immense as that of Latin: Latin was, after all, both the source and a medieval living language, in constant contact with the Anglo-Norman world. In contrast, Greek must have been either the language of (major) historical texts or the language of communication with the distant Byzantine Empire – with which direct contact must have been minimal.[2] Still, this does not explain the overall paucity of Greek lexis as appears from our initial examination.

One reason, it should be noted, must be the very nature of the AND language tag. This tag was not intended to indicate etymology, but rather to highlight the origin of words that still seem to be loanwords or borrowings when used by Anglo-Norman scribe or authors. In many cases those two aspects will overlap, but it means that when a word is fully naturalized in Anglo-Norman, it normally does not carry a language tag. This will mainly (and understandably) affect Latin etymologies: for example, pere1 is not tagged Latin despite its origin in pater, simply because it no longer registers as a Latin loanword in Anglo-Norman, in the way, for example loquendes (‘points for discussion’) probably still did (hence the ‘Latin’ tag). The same will often be the case for Greek, and that is why an entry like apocalipse (from ἀποκάλυψις) does not currently have a Greek tag. 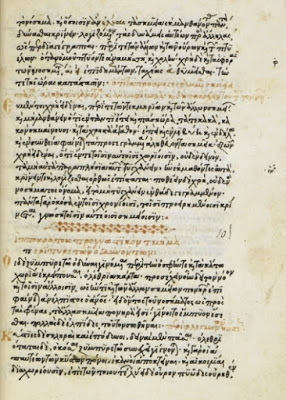 However, such a distinction (of etymology vs. loanword status) is often debatable, as it may be very difficult to gauge the extent to which a word is naturalized or not in Anglo-Norman, as it is for any medieval language. As such, it may be argued that some entries currently in the AND should be tagged as Greek. For example, the abovementioned ogdoadis is tagged, while ebdoadis, a similar term appearing two words earlier in the same source text, has not. Also, how about the many other Greek mythical beasts, such as gorgone, monosceros and fenix, currently included in the AND without any language tag? It is clear that a more concentrated re-consideration of the AND language tagging system could reveal a greater influx of Greek lexis.

To give but one example, a passage in the Anglo-Norman version of Mandeville’s Travels provides the names of all Greek letters of the alphabet, but so far, only omega has been given its own entry:

Fortunately, the online AND is a constant work in progress and its nature allows these omissions to be rectified in our next batch-update.

The problem also lies in a more general linguistic conundrum: very often Greek lexis reaches Anglo-Norman filtered through the medium of Latin. Particularly in Hellenistic times, Latin was prone to borrow Greek vocabulary extensively and subsequently Latinize it: for example, the abovementioned yperichon for St John’s wort (from Greek ὑπερικόν) has its Latin counterpart in hypericum (DMLBS 1192a). And randomly opening the DMLBS, we see phtisicus from φθισικόϛ (DMLBS 2270b, ‘one who suffers from consumption’, cf. AND tisik, while the new edition of P, to be published in February 2017, will contain the new entry ptisic), plectrum from πληκτρον (DMLBS 2316a, ‘instrument with which one plucks the strings of a harp or lyre’, cf. AND pleitrun), and pasta from παστά (DMLBS 2138b, ‘dough, paste’, cf. AND paste).

When such words turn up in Anglo-Norman, should the source be considered Latin or Greek? To some extent, the historical context may indicate a direct link with Greece or Greek writings: Anglo-Norman ju d’Olimpiades refers to a Greek event, even though it uses the Latin ‘i/y’ spelling instead of the Greek ‘u’ (Ὀλυμπιάς). Similarly, the abovementioned monoxille – the boat made form one piece of wood – features in a Latin text on the Roman military.

On the whole, spelling can offer some insight into whether such a lexeme may have entered Anglo-Norman in its Greek or Latinized form (for example, the use of Greek ‘k’ versus Latin ‘c’, or nominal endings ‘-os’ and ‘-on’ versus ‘-us’ and ‘-um’), but on the whole, in a language where nominal endings are usually dropped and where ‘c’ spelling is generally preferred to ‘k’ spelling, such a distinction can rarely be made.

In conclusion, we must assume that, just as in the DMLBS, a great deal of Greek vocabulary is ‘hidden’ in AND entries that are currently tagged solely as ‘Latin’ or not tagged at all. Therefore, in this case an overview of the entries tagged as Greek in the AND constitutes only the tip of the iceberg of Greek influence on the Anglo-Norman lexis.

[1] In Trevet’s Chronicle the word clearly retains its Greek nature:

(‘the root of the herb which in Greek is called ‘ypericon’, which we call ‘herbe percee’ or ‘herbe Johan’)