While the AND is primarily designed to give definitions for words found in medieval British literary and administrative texts, what it can also do is offer us insights into the linguistic reality of a medieval, multilingual Britain. While the tradition (and erroneous) view was that only the nobility used Anglo-Norman, while the other classes remained Anglophone, research by a number of scholars has shown that there was considerable interaction between Anglo-Norman and other languages during the period, and that a number of individuals were literate in multiple languages. An analysis of lexical borrowings into Anglo-Norman can offer some clues about the circles in which the language circulated.

The AND has a set of language tags that it adds to entries when the editors consider that the word is a borrowing from another language and not fully naturalized. It’s not a comment on the etymology of the word, but more of an acknowledgement by the editors that the word retains some of the features of the source language (though the use of these tags, like that of the original semantic tags, has been inconsistent and needs systemic revision).

The vast majority of borrowings into Anglo-Norman come from Latin and Middle English, which is to be expected, as these would be the languages most commonly used. It may seem unexpected to indicate borrowings from Latin, when Anglo-Norman is a language derived from Latin. We tend to use this language tag for words, or variants, which seem to be drawn directly from Latin, rather than having undergone the normal Romance morphological and phonological evolution.

While a certain amount of borrowing from Latin and Middle English is not unexpected, the AND has noted the presence of borrowings from a number of other languages. The dictionary includes words derived from Anglo-Saxon, Arabic, Dutch, Gascon, Germanic, Greek, Hebrew, Irish, Italian, Mongolian(!!), Spanish and Welsh. These can also form compounds with Anglo-Norman words, and as such we have compound tags, such as Germanic and A.F. (confusingly, we use A.F. for ancien français and not A.N.) We will be discussing each of these languages in future blogs – one on ME borrowings, one on Latin borrowings, one on Greek, Arabic and Hebrew; one on Romance borrowings; and one on Celtic borrowings. But what about Mongolian?

There are two entries in AND so tagged: cumant#1 and galahoth. Both of these entries are illustrated with citations drawn from Jean de Mandeville’s Le livre des merveilles du monde, a fictitious account of travels in the East.

Galahoth seems to describe a type of hat worn by the Great Khan. The MED also includes galaoth from the ME translation or the text, and defines it as ‘diadem worn by a Tartar emperor’.

(‘he removed his ‘galahoth’ which sat on his head like a felt hat, which was made of gold and precious stones and large pearls’)

The Lexis of Cloth and Clothing project includes an entry on this hat, but suggests that our Mongolian tag might be optimistic. Under galahoth we find the suggestion that the word may in fact be derived from the name Gilead: “It may in some way be related to galeola, Latin diminutive of galea ‘helm’, and also the Latin adjective galeatus ‘helmed’. It is possible that the word was ‘exoticised’ in form under influence of a name (e.g., common medieval spellings of Biblical Gilead in various medieval texts include galaath, galaoth, etc.).”

The word is not included in other dictionaries of medieval French, though there are similar terms suggestive of an etymological link. The DMF includes an entry galiot#3, drawn from another version of Mandeville’s text, describing a similar type of hat:

(‘And the emperor had them come before him and removed the cross from his ‘galiot’, which sat on his head like a hat, which was completely of gold and precious stones‘)

The DMF also includes an entry for galeros, attested once in a text from the late fifteenth-century, with the meaning of ‘leather hat with the insignia of Mercury’:

(‘we began at the head (of the statue of Mercury), which was covered by a leather item of clothing that the Greeks call ‘galeros’, to signify the planet by this name which has a small appearance among the celestial bodies‘)

This term may then derive from the Classical Latin galerus (FEW IV,29b ‘kappe’; DMLBS galerus ‘head-covering, hat’). Not as interesting of an etymology as one derived from Mongolian, but perhaps a bit more likely. 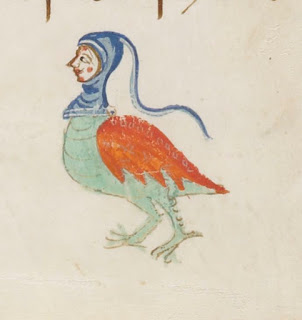 Cumant is used twice by Mandeville and appears to refer to the concept of ‘ten thousand’:

(‘This city was very valuable to the lord of the country as every year the rents from the city, as those from the city say, amount to .L. thousand ‘cumants’ of gold florins. For they count the totals by ‘cumanz’ and each ‘cumant’ is of the value of ten thousand florins‘)

The same concept is expressed in other versions of the text through the term tumau. The DMF links this term to that of toman, found in Marco’s Polo’s book, from a Persian word. tūmān, used to denote ten thousand. It seems likely that we should understand the word cumant and toman as being the same word, as confusion between the letters ‘c’ and ‘t’ is quite common in medieval scripts.

It appears then that our Mongolian tag is in error upon further evaluation of the two terms and there doesn’t seem to have been contact between the two languages (unsurprisingly!) However, we do seem to have uncovered a borrowing from Persian and will need to add a new tag to reflect this origin! [hap]