Before the AND starts its well-deserved Easter break, let’s have a look at the word – Easter – in its medieval context of multilingual England. While Middle English used the word ester(n for this Christian festival of the Resurrection, Anglo-Norman had the term pasche cognate with Medieval Latin’s pascha (DMLBS 2133a). There are clearly two different etyma involved here.

The word Easter is remarkable in that is found only in English and German, which still uses Ostern to refer to the feast.[1] Other Germanic languages, and even most European languages, use some variant of pascha: e.g. Pâques (Modern French), pääsiäinen (Finnish), Pasua (Italian), Pasen (Dutch) and πάσχα (Greek). The etymology of that root is straightforward: the word derives from the Hebrew word pesah for ‘Passover’ (the Jewish commemoration of the Israelites’ liberation from slavery and exodus from Egypt under Moses). There is evidence that already in the first century Passover imagery and terminology became associated with Christ’s resurrection.[2] 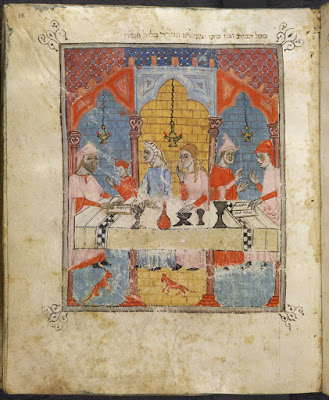 This original sense of pasche as a Jewish festival was often retained in medieval usage, as for example in this early fourteenth-century Anglo-Norman Bible paraphrase:

(‘On the feast of Easter, Jesus came to Jerusalem’)

Unsurprisingly for such an important Christian feast, the term, with reference to the Resurrection, is well attested both in Anglo-Norman:

(‘One Easter day, on thos great festival, the king sat down to eat’)

and in Medieval Latin:

(‘by giving back […] one penny at Easter for all service’) 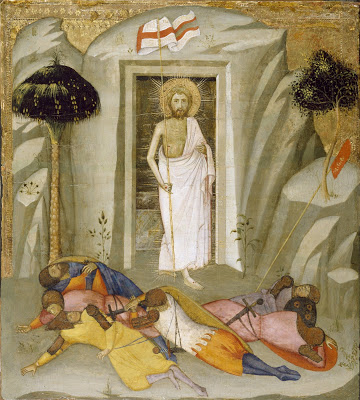 It also acquires a place in Medieval English, and the MED lists two variants: pask(e and (with loss of the final velar stop) pas(e 2):

Though largely falling out of usage in favour of Easter, these forms persist in English and are listed in the OED, pasch n. and pace n.2, as either archaic and historical or, in the case of pace regional (Northern and Scottish – though their most recent example is from 1955). However, English did preserve the etymon for adjectival usage in paschal, eg. paschal candle or paschal lamb. For some reason, the equivalent alternative, Easterly (‘of or relating to Easter’), fell out of usage by the end of the seventeenth century.[3]

Incidentally, pesah also produced the word phase in Anglo-Norman, cognate to phase n. in Middle English (see also OED phase n.1, considered historical) and Phase in Medieval Latin (DMLBS 2263c), solely in reference to Jewish Passover or, as is the case in the Anglo-Norman entry which is currently under revision, to the sacrificial lamb prepared for Passover:

(‘they roasted the Pesah lamb on the fuire’)

Returning to the term Easter, we can be less sure of its origin, although a number of theories have been brought forward. The word appears in Old English as easter or eastre in, for example, the writings of Aelfric and Bede. In his Latin De Temporum Ratione, written in 725, Bede explains the word as derived from Eostre/Eastre – the name, he claims, of an Anglo-Saxon goddess whose festival was celebrated around the vernal equinox (15.9). As no further reference to this goddess can be found anywhere else, most scholars believe that, while some pagan feast may have formed the basis of this word becoming associated with a Christian festival, Bede may have invented the goddess and her name (see OED etymology)[4]. 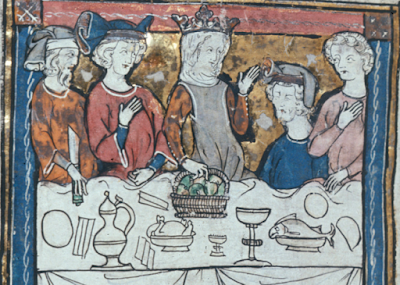 (unidentified – Easter festive meal with a basket of decorated eggs?)

In the case of German, the only other language using a similar word, Duden’s etymological dictionary (Der grosse Duden, Vol. 7 Etymologie, Herkunftswörterbuch der deutschen Sprache, 1963, p. 485b) relates Ostern to Germanic ausro, cognate with Sanskrit uṣas, Avestan ušah- , ancient Greek ἠώς or ἕως, and classical Latin aurōra, the word for ‘dawn’. As the OED confirms, possibly a deification of dawn (cf. Eos, goddess of dawn in Greek mythology) may well have been associated with pagan celebrations of the beginning of spring. In times of Christianisation, the word, associated with rebirth, may have been transferred to the celebration of the Resurrection. Altogether an interpretation which is not all that different from Bede’s millennium old account.

Interestingly, such an interpretation indicates a common origin for Easter/Ostern (the festival) and east/Ost(en) (the point of the compass), both associated with dawn and the rising of the sun. 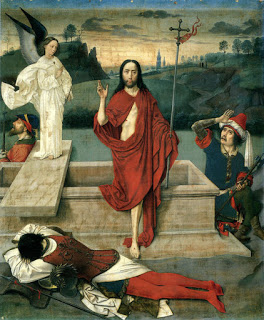 In the context of intense lexical interchange between Anglo-Norman and English and of vernacular languages influencing Medieval Latin, it is perhaps remarkable that no trace of any form or derivative of the term Easter is currently listed by the AND or the DMLBS. This restricted circulation of the term, confined to English and German, is intriguing, and the reason why it did not cross over at all in other languages, particularly within medieval England, is one of those unpredictable characteristics of languages. 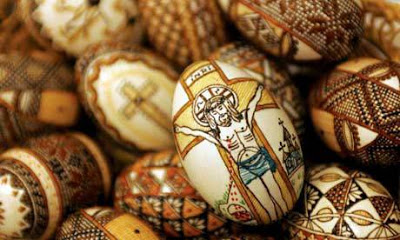 (For more information of the medieval tradition of decorating Easter eggs – for example, in 1290 Edward I’s accounts include payment for 450 eggs decorated with gold leaf – and the history of Easter egg hunting, see this blog.)

[2] ‘Cleanse out the old leaven that you may be a new lump, as you really are unleavened. For Christ, our Passover lamb, has been sacrificed’ (1 Corinthians 5:7).