In Europe’s collective unconscious at the beginning of the twenty-first century, mass epidemics were rather linked to bygone times, particularly the episodes of the Black Death that marked the end of the Middle Ages and caused millions of deaths. And yet here we are, all of us in spite of ourselves having become specialists in epidemiological vocabulary for more than a year now. Pandemic, epizootic, incidence rates, droplets… previously reserved for groups of researchers in infectious diseases, all these terms have now entered our daily vocabulary in order to put into words our new reality, witnesses of how the vocabulary evolves according to external circumstances. Given the scale of medieval epidemics caused by the disease commonly known as the plague, we may wonder whether these events have left any trace in Anglo-Norman vocabulary. 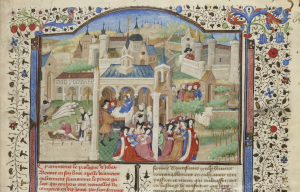 Three words present themselves as most likely terms associated with the phenomenon: peste, pestilence and morine.

In a copy of John Garland’s Latin text Morale Scolarium, the word strage is translated in the margin into Anglo-Norman as peste. This attestation of the word at the very end of the thirteenth century predates the examples recorded in English and Continental French, where pest(e) appears only in the second half of the fifteenth century. However, this single gloss remains the only example of peste recorded, to date, in Anglo-Norman. This virtual absence of the word in the vernacular lexicon is all the more remarkable because the term pestis is frequently used in Latin sources (see article pestis in the DMLBS). Thus, peste is not the word most frequently used in the Anglo-Norman lexicon to refer to a deadly epidemic. 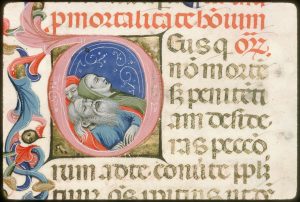 The widespread use of pestilence in Anglo-Norman may well be one of the reasons for the absence of the word plague in the lexicon. Despite its Anglo-Norman look, the substantive plague seems to enter into the English vocabulary straight from the Latin plaga or from Continental French. Indeed we can find the corresponding form plage 3 in the DMF with the meaning a ‘divine punishment or a calamity’ (see also plage 2 in the MED). Anglo-Norman has the word plage from plaga, but only with the original sense of injury or a wound (see also the more common spelling plaie1). 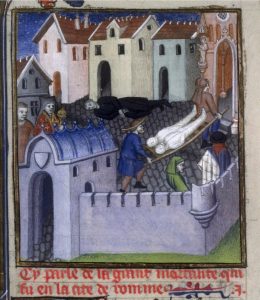 Pestilence is present in Anglo-Norman from the twelfth century, and appears mainly in a biblical context:

Pestilence is here an epidemic that acts as a divine scourge or punishment of men. This meaning is also found at the end of the thirteenth century in the Letter of the Priest John, once again as a divine curse sent to punish the unrighteous.

It is only at the end of the fourteenth century that we can find the word pestilence used to designate an actual epidemic that occurred at the time of writing the documents:

(‘[…] because of the deadly plague that had taken place before’)

(‘and sixteen of the tenants died because of the recent plague’)

These two examples refer to episodes of the Black Death that affected all of Europe in the fourteenth century (and contributed to giving the Middle Ages its reputation of a ‘dark age’). In both cases, the word pestilence is accompanied by an adjective, either to clarify its quality (mortiele/‘deadly’) or to situate it in time (darrein/’recent’). These episodes were written after the facts in order to balance the damages caused by the plague and to be able to claim compensation or tax relief from the King. It is interesting to note the repetition of a request after certain waves of plague, that is forcing the laboratores to return to work without compensation of salary in spite of their numerous claims, as in the following example:

(‘Before, against the malice of the servants who were lazy, and who did not want to serve after the [first signs of the] plague without asking for outrageous wages, our lord the King had commanded, with the agreement of the clergy, nobles and other persons of his council, that that kind of servants, men and women alike, were obliged to serve and would receive their usual wages and salary as agreed upon in the places where they serve […], and that servants who refused to serve would be punished by imprisonment’)

Not only was there no furlough (the word is a seventeenth-century borrowing from Dutch verlof) scheme but very little empathy in those days for the essential workers, as they could be imprisoned if they refused to work during the plague…

In Anglo-Norman, another word expresses the idea of a mass epidemic: morine. Used to indicate death after contracting an epidemic disease, the word then became synonymous with the cause of death, i.e. the plague:

(‘and afterwards they lost their cattle, which died of the plague’) 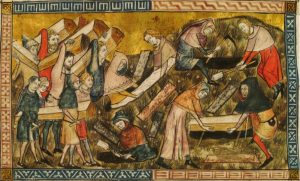 Like pestilence, morine designates a deadly disease affecting many people but has wider use in that it also refers to epizootic diseases, as shown in the second example. This sense seems to be the one most readily employed in official documents, where morine essentially designates episodes of mass mortality of cattle. Because of its etymology, morine focuses more on defining the result of the epidemic, that is the death of those who are contaminated (coming from the Latin verb mori, ’to die’), unlike pestilence which is the disease itself. 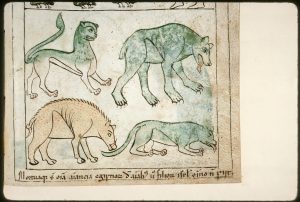 Similarly, Anglo-Norman also uses the word mortalité to refer to an epidemic or its deadly results:

(‘Then the day became night and the epidemic was significant’)

(‘That same year came the second plague in England, which was called the children’s plague’)

Occasionally medieval writers employed metaphors of weaponry in order to talk about the plague:

(‘At that time, epidemics so harsh, so deadly and so severe occurred […] that even within the city of Rome an infinite number of people died of the plague’)

We find in this text a figurative use of the word glaive (‘sword’),  to the ‘Plague of Justinian’, an epidemic that affected Rome at the end of the 6th century, causing the death of Pope Pelagius II and precipitating the fall of the Roman empire of the West. Another text describing the same episode adds an interesting detail:

(‘During the time of Pelagius, the epidemic of the pain in the sides killed so many of the people of Rome, that very few survived from it.’)

The disastrous consequences of epidemics being more readily defined in the texts than its symptoms, this text is one of the few to give us a brief description of a symptom accompanying the plague, the mal de flanc (‘pain in the sides’), allowing us, from a modern perspective, to identify the disease like the bubonic plague. It is only since 2012 (and thanks to archaeological excavations carried out in Bavaria) that it is known with greater certainty that the Justian plague was caused by Yercina Pestis, the bacteria responsible for the bubonic plague. Nicolas Trivet, the author of this Anglo-Norman Chronicle, preserved this remarkable detail in his text. If we take into account the fact that the manuscript was copied in the middle of the fourteenth century, the narrative of the evil that befell Rome centuries before the writing of this text must have had a familiar ring to a fourteenth-century audience struck by the Black Plague at the time. 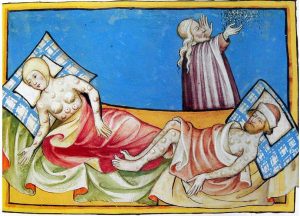 After this journey through the vocabulary of the plague in the Anglo-Norman corpus, I just want to wash my hands and clean the keyboard of my computer with disinfectant wipes, because, as a document of the fourteenth century reminds us: 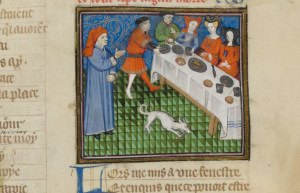 Take care of yourselves and stay away from the vile pestilence de mal de pulmon (‘the nasty lung disease plague’) which is raging the kingdom!