A guest blogpost by Dr. Emily Reed (University of Sheffield), who visited the Anglo-Norman Dictionary project in February-March 2020 through an AHRC bursary

‘Language shift […] is a social fact with linguistic implications’ (Thomason and Kaufman 1988: 212).

Language is a tool that we use to produce meaning. As such, it can only do what we enable it to do. Indeed, when wielded with skill, language can invest its user with much power. It can alter the usual course of events, it can change minds, and it can build a speaker’s reputation. A speaker can do this by playing to concepts that carry social currency: ‘politeness’, ‘aesthetics’, ‘eloquence’. Such labels might carry additional significances and consequences. For instance, ‘eloquence’ may be perceived as a marker of class, and depending on the listener, that may prejudice them in the speaker’s favour (or not).

Of course, language is also the possession of the listener(s), who engage in a discursive back-and-forth with the speaker(s), one that constantly calls upon external, social, and political factors.

This view of language recalls Einar Haugen’s notion of ‘linguistic ecology’, theorised in reaction against linguistic thought that saw speech communities as incidental to the business of studying language.

The true environment of a language is the society that uses it as one of its codes. Language exists only in the minds of its users, and it only functions in relating these users to one another and to nature, i.e., their social and natural environment […] The ecology of a language is determined primarily by those who learn it, use it, and transmit it to others. (Haugen 1972: 325)

In a linguistic ecological model, it is impossible to understand language without understanding its speakers. Here, language is considered as an organism; the speakers, the environment. Speakers form the conditions under which facets of language change, thrive, or die. The key to understanding language is understanding this ecology of actors as dynamic, interactive, and made up of change that begets further change. 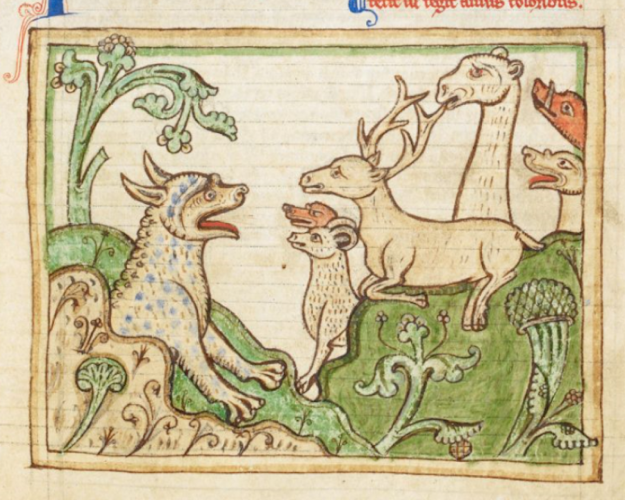 Nature can provide a metaphor for thinking about language (Harley 3244 f. 37r)

This way of seeing language is echoed by Halliday’s ‘social semiotic’ in which the view was that ‘[l]anguage is as it is because of the functions it has evolved to serve in people’s lives’ (1978:4). These functions are interpersonal (language facilitates relationships between people) and ideational (language represents a speaker’s ideas about the world). Language also serves a textual function: a speaker may commit the interpersonal and the ideational into textual form, broadly defined, thereby linking and declaring them to their context (i.e. wider society [1978:112]).

Closer to home for medievalists, Tim Machan (2005) picks up on the theme of ecology, applying it to Middle English:

[…] Haugen’s early formulation of language ecology retains a good deal of explanatory power. Some aspects of a language ecology in this general, pragmatic sense, like some aspects of a biosystem, may remain relatively constant across time, while others may change rapidly and do so in ways that transform other features of the ecology with them. (Machan 2005: 10)

The above discussion of ‘language-as-object’ forms a backdrop to my own theoretical praxis as a historical pragmatist. My particular interest is in how speech communities imbue linguistic forms with social meanings, and how the language ‘object’ can be made to perform interpersonal and ideational functions. It is not hard to imagine that the period of English/French bilingualism that existed in England during the Middle Ages represented a period of ecological flux, encompassing multiple changes and chain reactions.

In the fields of Anglo Norman and Middle English studies, there has been a great deal of attention on loan words, syntactic change, and phonological shift. All of these can be construed as social and socially-motivated. However, the implication of bilingualism on the pragmatics of Middle English and Anglo Norman is not as widely understood. A broad definition of pragmatics may be found in Crystal (1997: 301):

[Pragmatics is] the study of language from the point of view of users, especially of the choices they make, the constraints they encounter in using language in social interaction and the effects their use of language has on other participants in the act of communication

Additionally, and in line with the notion of linguistic ecology, Mey (2001: 6) states that ‘[p]ragmatics studies the use of language in human communication as determined by the conditions of society’.

In a linguistic ecology, social changes can be seen reflected in the language. These changes may result in enduring shifts in a language or may only come to represent a linguistic flash in the pan. 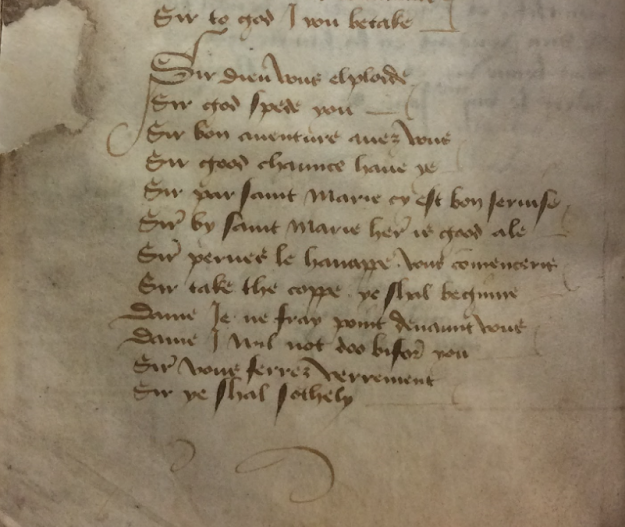 I initially came to Aberystwyth to collect data suggesting a change towards indirect question structures in Anglo Norman and Middle English. Today, we have an inventory of methods available to us when we want to ask for something. These can range from direct forms such as ‘give me that pen’ to less direct forms such as ‘can you please give me that pen?’, ‘would you be able to give me that pen?’ or even ‘I wish I had a pen’. These methods all exist on a continuum between ‘direct’ and ‘indirect’. The fact that such a continuum exists is testament to the social needs of our speech community: to be polite, to be seen as polite, to persuade, to maintain social cohesion (to name but a few). Linguistic indirectness is an innovative area of study, and one that illustrates the social function of language use.

For this blog post I will focus on just one indirect construction: ‘can’ questions. These call upon a speaker or addressee’s ability to do something, but most of us would also recognise this as a form of indirect question. These structures are largely thought to be a modern invention (Culpeper and Archer 2008; Culpeper and Demmen 2011). However, as my data-gathering research at the AND confirmed, these appear in a small number in Middle English and Anglo Norman.

Hoccleve’s Regiment of Princes (1413) presents a borderline case. In the following quotation, an old man asks Hoccleve, when he wants to sleep with his wife:

[Are you, my son, at all aware

Of which times you ought to abstain

And of which not? Can you answer this?]

The pragmatic mechanics behind the construction ‘can you answer this’, as opposed to simply ‘answer this’, are ambiguous. The old man may be questioning whether Hoccleve is capable of answering his question. However, by its very existence, the question demands an answer. Thus, a second possible pragmatic meaning: ‘I expect an answer, but I am appealing to your ability to answer to avoid imposition’. We can never know the intent represented by this utterance. However, this kind of pragmatic ambiguity provides the conditions for development towards a conventional indirect question structure, should members of the speech community develop the construction that way.

We see can see further examples of ‘can’ questions in Anglo Norman texts:

[Could I be lodged here?]

[King Porrus says to him ‘Can you speak to the King?’

‘Take to him this letter where my secret is written’]

The latter example, from the Anglo Norman ‘Alexander’, can be seen in another manuscript, Paris BNF Français 24364 f.56r. Both the affirmative response of Alexander, and Porrus’s follow up command suggest that the initial construction ‘puis tu’ should be taken as a form of question (or command) that sits towards the indirect end of the directness continuum. A question remains: why start with a less-direct construction? The choice between direct commands (‘speak to the king’) and less-direct commands (‘can you speak to the king?’) points towards different social needs.

The former example is also significant, largely due to the text type: dialogues designed to teach conversational French. Because the purpose of these dialogues was to impart a serviceable spoken French, and therefore designed to make the jump from text to speech, it is likely that the language they contain reflects an instructor’s view on what conversational French sounded like (or should sound like). The example is also interesting, as a rare example of asking permission using a ‘can’ question.

The above quotations are a small section of the data gathered on my research trip. This post moreover represents the beginning of enquiry into indirect question structures in both Anglo Norman and Middle English. The presence of these constructions, which can feel disarmingly modern, raises questions: what was the need that saw these appear? I don’t suggest direction from one language to the other, but the fact that this structure appears in both languages suggests the same group of speakers. Do such constructions form part of a register?

Returning, finally, to Machan, the nature of this type of sociolinguistic exploration can be a subtle art:

The history of a language’s social meanings and functions is made more complicated, since it confronts not only the gaps in the historical record but also the fact that much of the linguistic self-consciousness that motivates individuals to write about sociolinguistic issues seems to be even more recent than the advent of print. (Machan 2005: 4)

Machan succinctly encapsulates the nature of the problem: we are often left feeling like we are ‘reading in’ social motivations. Although, this is also a problem shared by linguists studying live speakers. Nevertheless, to do this sensitively, and sensibly, we must corroborate where possible with secondary evidence, commentary, material culture, and historical events. These considerations will inform my next steps in this research.
– Dr. Emily Reed, University of Sheffield

The zeugma in this post is dedicated to my beloved partner, Rod McDonald, who accompanied me to Aberystwyth. 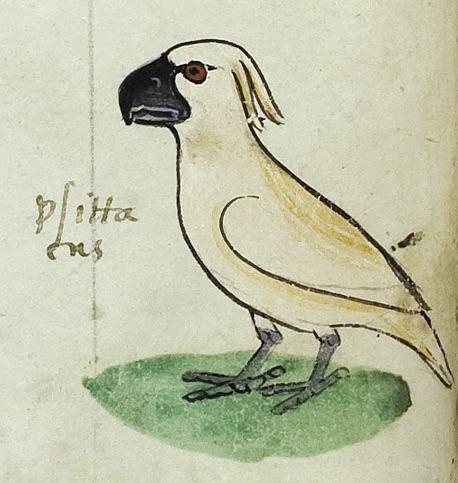