An introduction to concordances (now with added violence)

Edward Mills is a PhD student at the University of Exeter, and — like David, our previous author — was a recipient of a bursary from the AND and the Arts and Humanities Research Council to support research at the Dictionary’s offices. In this guest blog post, he offers an insight into how he spent his two weeks.

And when the child was seven years old, they gave him to Joce of Dinan to be taught and brought up, since Joce was a knight of great learning.1

You’re seven years old. You didn’t sleep well last night — even an aristocratic family like yours, after all, isn’t immune from the winter chill — and you shiver slightly as you rise and go to rub the sleep from your eyes. Then you remember what your father told you the previous evening: that today was going to be different. From today onwards, you’ll be staying up the valley, and wise knight Joce, to … to …

… to what? This passage, taken from early in the Anglo-Norman ‘ancestral romance’, Fouke le Fitz Waryn, certainly allows us to conjure a vivid image of the young title character at the moment of his departure from his parents, but it’s far less useful in understanding what young nobles like Fulke would have done after leaving their families behind. What exactly would Fouke, taken away from his household at the age of seven, have expected to gain from his time in the household of Joce of Dinan? All that the Anglo-Norman text really tells us is that Joce was expected to ‘aprendre e norir’ the seven-year-old Fouke; shortly afterwards; we get the briefest of hints about what this might involve, when we are told that Joce ‘le nourry en ces chambres ou ces enfaunz’ (‘brought him up in his household with his own children’). That’s still not all that much to go on, though, especially given that the Anglo-Norman Dictionary defines both apprendre and norrir as ‘to bring up, to educate’, making, for both words, reference to precisely this passage. Why, then, would our 14th-century author have used both of these terms if they were synonyms of one another? There’s certainly an element of stylistic doubling going on here, as well as doubtless some semantic overlap, but do the terms aprendre and norir, along with other Anglo-Norman ‘verbs of education’, really map onto one another quite that easily?

These are some of the questions that I’m trying to answer in my PhD. In the interests of full disclosure, I should probably mention that my PhD isn’t actually on the subject of Fouke le Fitz Waryn: he texts that I’m looking at are far more overtly didactic in nature, often devoid of a narrative and displaying a forthright desire to instruct their audiences from the outset. Examples from narrative literature such as Fouke, though, do illustrate the semantic slipperiness of much medieval French terminology in the area of education. When an Anglo-Norman author uses a term such as aprendre or enseigner in a prologue to a didactic text, what kind of ‘education’ does this term imply? What, in short, can the words that Anglo-Norman scribes used tell us about vernacular understandings of instruction?

Questions in this broad research area are at the heart of my PhD, which looks at a range of Anglo-Norman didactic texts to address how education was imagined and enacted through French in post-Conquest England. Looking specifically at word choice, though, brought me into contact with something that I’d not really worked on before: historical lexical semantics. This discipline combines the study of word meaning with an interest in how languages change over time, and during my two weeks at the AND, I’ve been making use of its unique resources, many of which tie in directly to the AND staff’s own research interests in semantics and lexicography. In this blog post, I’d like to offer a brief introduction to one of them: concordance software, or more specifically, how a piece of very 21st-century technology can help us to understand the world-view of a mid-14th-century scribe.

The primary function of concordance software is — well — producing concordances. Full ‘concordances to a text’ are fairly simple in theory: they’re essentially just a listing of every instance where each word appears within that particular work, arranged in alphabetical order. They’re used for all kinds of work in linguistics, but have traditionally been very laborious to produce. For one thing, they’re (by definition) many times longer than the original works themselves; if someone were to produce a full concordance to Fulke, for instance, the sentence with which this post began would appear on something like ten separate occasions, one for each of enfant, anz, manderent, and so on. (Mercifully, function words like e and quant tend to be omitted.) To give an idea of just how terrifying printed concordances can be, here’s a snapshot of one page from the Concordance to the French Poetry and Prose of John Gower, which the AND rather handily had on the shelves in the office: 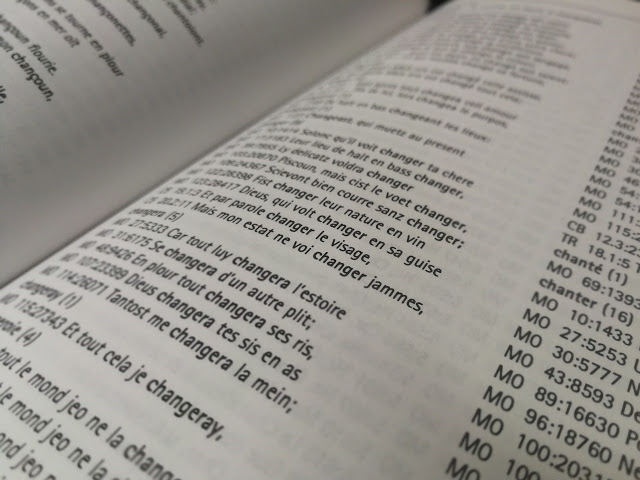 Most people using concordances, of course, won’t need to refer to every single word in the text; instead, like me, they’ll be looking at a handful. This is where concordance software such as what the AND uses comes into its own: producing a ‘limited’ concordance, which only searches for instances of a single string of characters across a corpus, can be done very quickly by dedicated programs, as these can plow through millions of words of Anglo-Norman set out in .txt format. Richard Ingham, for instance, has established a concordance of Anglo-Norman noun modifiers — cel(e), cest(e), nul(e), tut(e) — in order to investigate whether or not gender marking of noun modifiers is retained in later Anglo-Norman. By looking at the context to these words en masse, made possible by the way in which the concordance software arranges its material, specifically the nouns that they refer to, it becomes possible to infer whether ‘incorrect’ renderings (along the lines of *cel chose, *ceste munde) is as frequent as one would expect them to be, if the descriptions of later Anglo-Norman as ‘decadent’ are to be believed. (Spoiler alert: they aren’t.)2

My interests, though, are less grammatical and more semantic: I’m less interested in the precise realisations of a given lexeme than the various meanings that are ascribed to it across Anglo-Norman texts. With work like this, the concordance isn’t a magic bullet: just looking at the immediate context of a word won’t tell me everything I need to know about how it was understood. I therefore need to take a look at the broader context — usually around ten lines either side of the word I’m looking for — in order to gain a firmer handle on is meant by a particular use of (say) chastier. Thankfully, concordance software is still useful in this respect, as it can show me precisely that in a separate window — and if I really want to consult the print version, I can always fall back on the extensive library of texts available at the AND. 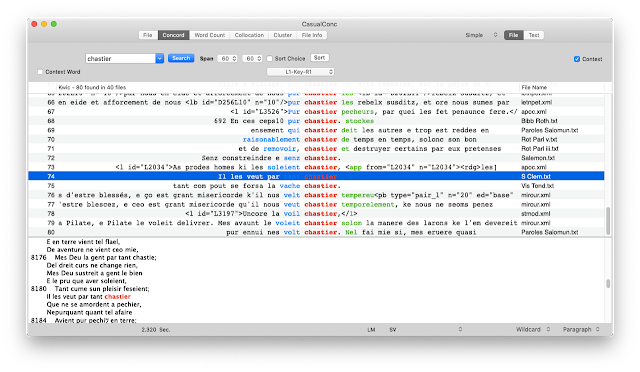 While I’m using a separate piece of software here — CasualConc 2.1, for the curious, thanks to its offline functionality — the AND has almost exactly the same functionality available, in a very user-friendly yet powerful online interface. Concordances of particular strings can be created both out of the Anglo-Norman Textbase (which currently includes over 70 texts from the twelfth to the fifteenth century) and from all of the citations that make up the entries in the Dictionary itself. Over the two weeks I spent at the AND, I had enormous fun probing the possibilities of concordance searching, which caters from simple string-searches all the way up to comprehensive support for regular expressions (for the real nerds out there), and cataloguing the various ways in which specific verbs of education are employed. Among the results for a search of norrir, of course, can be found a single instance of a double-verb sub-clause that offers the tiniest glimpse of what education meant to authors of prose romances.

Don’t worry about Fulke, by the way. His education turns out all right in the end — all right enough, anyway, for him to be saving Joce de Dinan’s life (two pages and 11 years later) and slicing enemies in two. Perhaps we should be grateful that that particular facet of Anglo-Norman education hasn’t survived into the modern curriculum.

Edward is a PhD student at the University of Exeter. During his time at the AND, he shared out a series of ‘fun facts’ about the AND, which you can read on his Twitter profile.